Fighting And Bullying Are A Common Occourrence In New York City Public Schools. 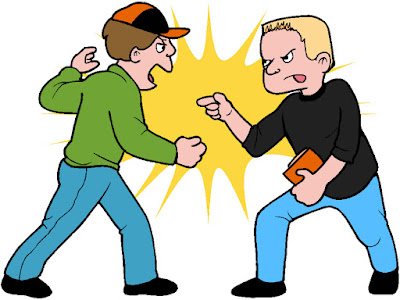 Despite Mayor Bill de Blasio's claim that New York City public schools are safer, the truth is far different.  In today's New York Post, the article claims that District 29, which includes Cambria Heights,  Hollis, Springfield Gardens, Saint Albans, and parts of Jamaica has the highest rates of bullying and fighting in the City.

While District 29 in Queens has the highest incidents of bullying and fighting,the other school districts have similar issues with 43% of the city students reported fights in their school and 14%  see fights "most of the time".  Thanks to the lax school discipline policy by Mayor Bill de Blasio, students are not safe from bullying and fighting in the New York City public schools.
Safe schools?  Yeah Right.
Posted by Chaz at 8:50 AM

This is the result of the DOEs lax discipline policy.
By allowing bullying and fighting to be rampant they are accelerating four initiatives:
1. Parents enrolling their kids in online schools
2. Tenured and veteran teachers leaving the system sooner.
3. Teachers getting letters for file and being accused of misconduct and threatened with termination
4. Increase in Charter school enrollment

Bullying and no metal detector resulted in a murder inside Wildlife HS last year. The DOE has learned nothing and the UFT remains silent.

Hi chaz
Most incidents do not get reported to OORS. In my school kids leave the campus and go missing .The admins do not report the missing students to the DOE .I know this since I FOIL . for a year , no incidents reported.
You can Google missing teen and get the info.
What are the consequences of the mis-reporting? To my knowledge, the principal would face a lot of trouble if city council and the ny post got this story. Its a violation of Avontes law too. These awol occur during the school day .

What about unreported missing students awol during school day? Using FOIL, I discovered that the admins do not report incidents to OORS . What are the consequences for the admins if city council and the media find out?

Our school has lots of missing kids too.
Sometimes we see them outside on the street when we go out for dunkin doughnuts.
We all pretend not to see them.
At this point, it's more trouble than it's worth and the admins do not want to see, hear or be told any 'evil.'

As for bullying, our profession is mostly female and increasingly younger.
Young female teachers have a soft spot for the 'bad boy' students.
Do not even try to deny it.
I for one have seen it over and over.
Bullying will never end because when a bully acts, everyone starts the 'bully is victim too' garbage and the bully got the attention he or she wanted.

@4:43 This is a very serious issue that you are barking about. Unreported missing students has to be one of the most serious posts that I have ever seen on here and have ever heard discussed. The whole city will riot once the public finds out about the unreported missing students. City council and the media have no clue how many students are actually missing from schools, cutting classes and/or leaving early. Everyone thinks these students are in schools even though they see these kids riding subways and hanging out every day. You are a genius. I think you have really covered a really coverup. Excellent work... Now, please keep foiling these coverups and let us know what you come up.

@4:38 I remember there was a time teachers thought if I keep saying students are cheating during regents then admins get in trouble. DOE solved this issue by saying teachers must report cheating and once teachers report cheating then go after the teacher. Ask and investigate "how did you allow the cheating to happen? Follow up by file letter." Problem solved. Reported cheating on regents went down by 90 percent.

The city is aware of what goes on. They are not going to expect every principal to report every missing student unless the student is elementary or maybe middle school. However, if a student is missing in elementary school then YES YES this is serious.

In DeShawn's case, he leaves middle school early almost daily. DeShawn and his friends are usually home earlier than I am when I am cutting school. He barely stays around for his last 2 periods of the day. I know this because I try to beat him home so he doesn't put my apartment on fire again. DO YOU FUCKIN think his principal is putting this on OORS? Do you expect his superintendent to hold him accountable for this nonsense? DeShawn is 5' 10 and 200 pounds of muscle. The fuckin mafia can't kidnap this kid and who can keep DeShawn in school if he doesn't want to stay. Even if I complain and say DeShawn leaves early and nobody contacts me - you think anyone should or will be held accountable? First, the school could say we did not know he left early. Second, this is not the school's fault.

These kids are emotionally disturbed. We even have autistic kids. Check out Avontes law .