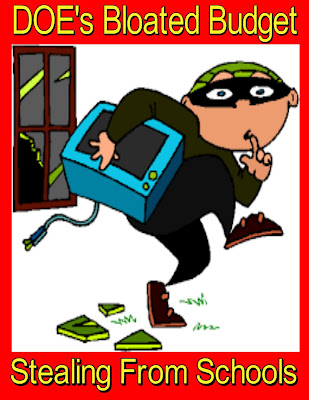 A few years ago their was an education blogger who has now retired.  He once wrote the actions needed to improve our public schools back in 2009.  In this down time, I believe we should revisit those five steps that "Accountable Talk" listed almost a decade ago.

Accountable Talk's blog stopped publishing in 2016 but his five 2009 talking points are still valid in 2018, Has anything changed since he published these action items?  Not really.  In fact one action item, student discipline has gotten worse under Mayor Bill de Blasio, with "warning cards" and useless restorative justice meetings rather than student suspensions and arrests.

You would think our union leadership would have adopted these five talking points and pressure the Mayor and Chancellor in reforming the money hungry and bloated DOE.  However, none of the five action points have been adopted by our union leadership.  In fact, President Michael Mulgrew told an Executive Board meeting that the UFT does not go after vindictive administrators since they are fellow union members (CSA).  What a crock of shit!  Of course he saw no issue in joining an anti-police rally organized by Al Sharpton,  Aren't the police (PBA) fellow union members?  Our union leadership is complicit in the DOE's attack on their teachers and rather than be pro-active they barely react to the DOE's policies that hurt the classroom environment.

That bald turd couldn’t make it as a carpenter or teacher, but he continually gets re-elected as UFT President. There should be 6th step; throw out Unity and their swine herd with the number one pig, Mulgrew.


Everything Mulgrew says is a crock of s__t !

When you allow the hoodlum low life animals to run amok with no real consequences, all anarchy will be the result.

@7:37 funny!!! I would not go as far as calling teaches low life animals but seriously "Fire all administrators"??? How dumb does that sound? But yet to some it sounds logical. Reminds me of "When One Flew Over the Cuckoo's Nest". Letting the mental patients run the asylum is never a good idea. We had Carmen try. Look what happened?

Who would supervise? Politicians? Having teachers supervising teachers is much worse. Teachers eat their own. Rat each other out and talk about each other even on here. Just last week my principal took me to see why the A/C at her house was out and 3 teachers complained that I should have been in PD with them??? WTF? They should have been happy for me that I was able to escape the PD BULLSHIT instead of complaining.

How many times do we hear: "I am an ATR that really wants and deserves a job unlike my ATR colleagues who make me look bad by coming to school with a newspapers etc..."

After having Carmen (career educator? my ass!) running the DOE - I'd rather have an outsider and maybe even a non-educator. Carmen used to think of herself as a teacher.

I remember I wrote a proposal to open a high school with an administrator friend of mine. The school was "Future Network Leaders and Principals H.S." and we'd be able to graduate the students with admin licenses. They would instantly become either network leaders or principals. Klein loved our idea but left before he can approve it. Those were the days.