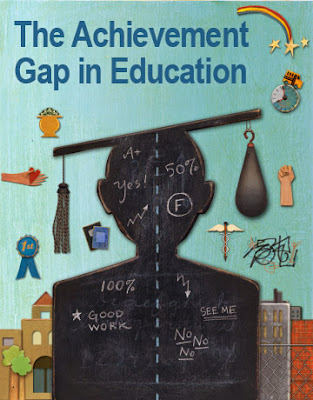 The New York Post did an analysis of the racial achievement gap, based upon State tests, for the last five years and found out that it actually widened, despite efforts to close it.  This shows the failure of Mayor Bill de Blasio's and his Chancellor, Carmen Farina's policies to improve public education for Black and Hispanic students.

In English, the racial academic achievement gaps between Black/Hispanic students and White/Asian students also inched up.

The bottom line is that the failure to close the racial academic achievement gap is a real problem that hurts the Mayor's claim that his policies are making the New York City public schools better.
Posted by Chaz at 2:24 PM

But, but, but...Common Core was supposed to solve everything!

A veritable ARMY of coaches! PDs every week! Hiring teachers 'that look like the students' rather than hiring the most competent regardless of race!

What about the billions of dollars spent to close the gap! Charter schools, anyone?

How is it possible that things are getting worse now?

Perhaps the education reformers had it wrong all along. Maybe oppressing teachers, psychologically terrorizing them, tying their hands with micro-managing, adopting ill thought out schemes - perhaps all this did was make things worse.

Aah, but what do we lowly teachers know?

Everyone is playing it safe these days.

Pass everyone or the admins try to drum you out.
(Holding them accountable is only lip service, as we all know.)

Tolerate garbage behavior in the classroom that would have gotten a kid sent out, detention or even suspension.
(Remember, we are culturally incompetent, and if Dequan wants to talk loudly through your whole lesson, walk around or throw things, it's all your fault for not understanding 'how he learns.')

Cover your butts with every little piece of paperwork, witnesses, etc at all times.
(The desire of admins to ruin careers is at an all time high because they look good to their bosses for being 'tough' on those lousy teachers.)

How can anyone think about going above and beyond when those who do get smacked down, insulted, looked at as if strange and ultimately terminated?

Even the ANC in South Africa, as per the NYT today, is killing those in its ranks who expose the lying, poor planning and even corruption of their leaders.

Just being a great teacher now is enough to make admins bad because many of them could never hack in the classroom and so moved up.

Look it at the statistics from Dwarka. Dwarka 8s failing all students. Every year she stays there the school is getting worse.

Who woulda though that passing students for doing nothing in predominantly minority schools would result in them not learning! Shocker!

The issue we have is the principals.

They have too much power.

They are power hungry.

More importantly, all of them are trying to be superintendents which is an easier job. M

How do you become a superintendent? You harass teachers, excess older teachers and let the kids run wild and keep suspensions down.

I feel mulgrew is a shill, however the current state of the doe is weingarten and Bloomberg.

This is clearly due to the fact that the teachers the nycdoe is hiring and putting in front of senior teachers these neophyte teachers who are cheap but cannot teach like our atrs for example. The sham will now who results from keeping our best and most senior teachers on the side lines now is having its consequences

They have been trying to push this shit agenda for several years now hurting people and students. The creation of the atr pool is a sad political situation and once again, its the kids who suffer the most.

A lot of these Leadership Principals have turned schools in factories of fabricating credits, yet these Principals continue to destroy our schools.

We need to make the system better
1) We are not educating kids because of discrimination.
2) We are discriminating against teachers to keep the kids from learning.
Instead of keep complaining over and over again, do something about!
I tried and got 3020a. It was worth it. I will win one-day, I hope it’s soon.

The UFT is to be blamed on discrimination on older teachers because our schools used to be much better.

Simple websites to developing robust software applications or crafting the most effective digital marketing strategy with SEO, AdWords and social media at the core, we are the perfect web company for businesses of all sizes.