The Venezuela Education System Is In Collapse 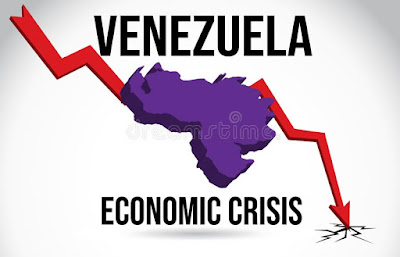 Venezuela was once the richest country in Latin America and had an education system that was one of the best in the Western Hemisphere.  However, the price of oil dropped from $100 a barrel to $30 a barrel in 2013 and Hugo Chavez died.  He was replaced by Nicolas Maduro who mismanaged his country and saw the collapse of the education system.

Most of the middle class of the country fled and teacher salaries were cut drastically to near minimum wage of $8 monthly.  The low pay and lack of students and resources have seen the majorly of teachers in the country leave the country and or the profession have not returned to the classroom in September.  The lack of students was a result of schools not providing meals because of a lack of funding by the government.  Some schools have less than 10% of their enrollment.

The New York Times has an excellent article on Venezuela's education travesty under the Socialist government.

Here is a Frontline timeline of Venezuela's economic collapse.
Posted by Chaz at 1:03 AM

If low pay caused the teachers to leave, what do you think happened when the skilled power plant operators and engineers saw their pay cut? Might that have contributed to the electrical outages across the country?

What conclusion can you draw about socialism from this? Is there a correlation between pay rates and skill levels?

funny how when it's a so-called socialist country that is linked to a collapse - caused by falling oil prices but when a capitalist nation suffers economic dislocation the word capitalist is not used - See central America for instance - the reason we have this migration crisis. How's that socialist country China doing?

What a crock! China socialist? Get real!

I know this has nothing to do with Venezuela. I remember living there back in the 1950s and we had to leave within 24 hours because there was a coup d'etat. My father worked for ESSO. It is a country were people have long suffered despite being one of the largest oil producers.

Can someone tell me if I can use my sick days in my C.A.R. for FMLA? I went to the UFT and they told me I could use the days in my sick bank for family leave, but HR Connect said NO and that family leave is unpaid leave. I spoke to a teacher in our school who used her sick days to take care of her husband when he became sick. I intend to speak to our payroll secretary.

Turns out - to nobody's surprise - -Socialism is a failure. I don't think anybody (outside the academic types and Fidel's immediate family) really supports Socialism and Communism anymore.

I have it on good authority from a high placed DOE source that the real problem in Venezuelan education is lack of group work, poor lesson planning and not enough differentiation

We aren't seeing socialism, we're seeing fascism......privatizing the public domain. The fascists and socialists were always at odds (Mussolini/hitler vs. Stalin)

You would use all your car days first (get a Drs note), and apply film.

Yes, you should be able to use CAR days for a FEMLA leave. I have. Unless it has changed now.

Does anyone believe this character and her foes aoc plus 3 and their demented view of our country? Go back even if you were born aoc plus 3 because you all are a poison to tax payers.

Amazon jobs wasted with your racist agenda and since election have done nothing for the american people but create chaos for native Americans and constant push to keep illegal people here and pay for them also. We all now see how electing ass wipes like aoc has consequences on our way of life.

To 9:58, uh, Hitler and Mussolini were socialists, draped in the robe of nationalism, but socialists through-and-through.

Both did a lot of big government actions not too different from what many Democrat presidential wanna-bes are proposing.

Socialists try to distance themselves from those socialist experiments that went awry.

China only became successful when they adopted capitalist practices into their dying socialist model from the late 1970s.

Norm Did I say anything about the government being Socialist? Both Chavez and Maduro were Socialist and one funded the education system while the other did not.

Hitler and Mussolini were "democratic socialists" , which were fascists; they absolutely tried to privatize public sector works.

They did not hold to the beliefs of Marxism.....you need to do a bit more reading.