My Question To The Union. Have You Met With The DOE To Address The Problems Experienced By The ATRs In Their Weekly Assignments? 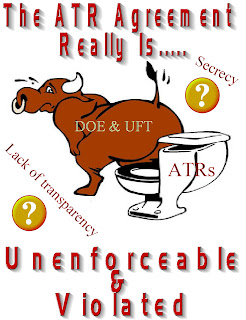 It has been almost a year since the weekly ATR assignments have been implemented by agreement between the DOE and the union.  The ATR agreement was supposed to maximize the placement of ATRs in schools that needed teachers in their subject area.  However, in talking to many ATRs that pass through my school and during my time as an ATR, the reality is very different, I was sent to schools that didn't even have Earth Science as a subject.  In fact the incompetents at the DOE  started me out  at York High School of Science for the first five weeks.  The problem?  The school did not even have Earth Science!  Unbelievable but true.  Furthermore, I went through high schools that had non-Earth Science teachers teaching Earth Science.  One high school had sixteen classes of Earth Science being taught by teachers with no Earth Science License!  Other schools tried to ignore the ATR Agreement by advertising for a teacher on Craigslist. My experiences with the DOE's idiotic algorithm was replicated by 1,300 ATRs who went from school to school with little expectation of landing a position.

The question is how did the DOE and UFT deal with the many abuses and problems associated with the ATR agreement?  He is a list of just some of them.


Now I have been told that the ATR committee has never met!  With all these pressing issues and unresolved problems, why not?   Then again "who is on the ATR committee"?  Why the secrecy and lack of transparency? Moreover, is it true that the ATR Agreement is not only for this year but is a permanent part of the contract?  Finally, with the potential of 3,000 ATRs for next school year, wouldn't the union want to have an ATR on the negotiating committee?  You would think so but don't count on it.

I would like to know at the end of the year, how many ATR's there are and how many were placed in permanent positions.

Make work as disagreeable, humiliating and unsatisfying as possible and watch as ATRs leave the DoE....just as Bloomberg wants. The UFT has created a holding area to phase out unwanted and undesirables to keep tenure. BYE BYE

ATR committee? what's that? I refuse to even go to my district UFT rep because at her nicest, she is dismissive at best. I've spoken to the UFT offices and they could care less about the ATR situation and what happens to us. BAsically, they would love us to leave, but won't and can't let that happen b/c that would kill our worthless union and the member benefits we contribute. This movement is supposed to be a 'pilot' program, so in UFT/DOE world, it's here forever. I predict the ATR crises never ends and if you are an ATR with a PE, Social Studies, K-6 license, then you'll be an ATR forever or until you leave

At least you have a job. You morans do not seem to understand that!

i concur, which is why i stopped caring about the job and if they place me

Great site! I'm trying to find an email address to contact you on to ask if you would please consider adding a link to my website. I'd really appreciate if you could email me back.

Thanks and have a great day!

Look at the SchoolBook article about ATR's today. The junior reporter didn't bother to speak to any ATR's, just our union and the DOE. It appears more like a press release than any journalism.

I read the article on school book about ATRs.

I would love to see how many ATRs are satisfied with the positions they took, will be excessed at the end of June, have gone out of district, have elected to pay bridge tolls, or are being harassed by current schools they are working at.

If our union cared about the ATR, which it does not, it would give us a questionnaire to fill out about our satisfaction or lack thereof with the ATR situation

I wrote about just that issue.

School Book is full of crap.
They don't allow you to post anonymously, so if you post something against the DOE, they know who you are.
WNYC and the Times are afraid of Bloomberg, because they have to rent out the "Bloomberg Terminal' (the invention that continues to make him billions), and if they criticize anything he does, he'll simply raise the rental fee.
The only show that WNYC has that does any city discussion, the Brian Lehrer Show, has done NOTHING about the current crisis.
They even had Michele Rhee on his show!
Basically, Bloomberg has a media monopoly in NYC, in addition to his own radio station, TV station, Magazine, and multi-billion dollar business.
Of course, the "liberal" white people of NYC re-elected this dictator three times- people of color all voted for Thompson, while the majority of city teachers all live on Long Island.
What a nightmare!