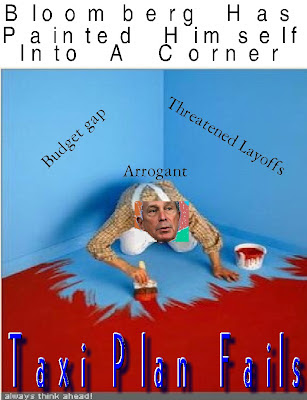 The Mayor experienced a major setback when a judge ruled that the City's plan to sell taxi medallions for fare pickups in the outer boroughs and north of 96th street in Manhattan was unconstitutional since it did not get the City Council's approval. (Damn, if he really was the Emperor, no lousy judge could ever stop his decrees).  The halting of the "green cab" program has blasted a $625 million dollar hole in the budget and a possible $1.4 billion dollars for the next three years.  What is the Mayor's response?  He has proposed layoffs of City workers and more efficiencies in the government.  Of course don't look for reductions in high-priced consultants or technology projects, instead there will be less resources available and of course, a continuation of a salary freeze.  While I do not have the knowledge of how to close the entire budget gap, I do know how he can put a significant dent into it and that is placing ATRs into the many vacancies that are available,

Starting the 2012-13 school year, there will be approximately 2,000 ATRS, despite the DOE's claim of less.  That means that even if some of them get hired provisionally, you can still expect over 1,000 ATRs floating around for the year.  That means that $165 million dollars, not including fringe benefits,  will be wasted by the City in paying those ATRs when vacancies are being covered by long and short term substitute teachers. Therefore, if the Mayor is truly serious about saving money and close the budget gap, he should start by ordering the DOE to start placing ATRs in the vacancies.

I do wonder why our union has not brought this up publicly as a cost-saving method to close the City budget gap?  It would seem obvious to me that this proposal is a public relations win for the union and puts the Mayor on the defensive but then again our union's actions or inaction are sometimes part of the problem and not the solution.  In any case, if the Mayor is looking for "efficiency" the effective use of ATRs by placing them in the vacancies is as efficient as it gets.

Bloomberg has lost again and is looking like a huge fool. It seems to me his plan is to create as much of a mess and ruin as much as he can before he leaves office. And the unions and the public are standing by allowing this lunatic ruin our city! He is worrying about who is drinking big sodas while the city is unraveling as orange bus lanes are being installed to create more traffic and havoc!

Good point Chaz. When the public gets to read that they are paying teachers not to teach - lets just say $65,000. While they are paying another $35,000 for a rookie teacher -they are in effect paying $100,000 for what? An inexperienced teacher in the classroom and the experienced teacher in the lunchroom. Crazy!
We in the ATR need to get in front of this because if we let THEM characterize us, we lose half the battle.

Not to mention that the city just lifted the hiring freeze in many certification areas all over the city.

I have a feeling they will be lifting the freeze in more districts soon.

Once again, Chaz, you are mentioning a plan that is contingent on the DOE using common sense(this does not and never will occur).

Of course I know the DOE will not do it, except if the Mayor tells them to. However, it is up to the union to put pressure on the Mayor to do it by going to the media.

the media and general public hate us so much that it will not make a difference. and the city has the public in the palm of their hands. once they say,'we are looking out for your children' it's all over. the general public hates teachers. it is unfortunate, but true. especially in this city. also, sadly, most people don't even understand excessing and a good portion of teachers feel atrs should go. the city has turned this union's members against each other . now that the freeze is up, it will be even worse

What the UFT needs to do is pick a candidate to get behind in the 2013 mayoral election who is pro-labor. I do not care if it is a Democrat or a Republican. Get behind a candidate who has a background in city politics and who understands just how badly Bloomberg messed this city up

And let's not forget the 4% state increase that the NYCDOE is going to lose next year because he insists on not agreeing to the new evals.

I personally think that he's looking forward to this budget crisis. He's coming up to his last budget year and there is other way he will matter unless he's threatening every player in the city with large budget cuts.