What Will The New School Year Bring? Probably A Continuation Of The Problems That Ended Last Year's School Year. 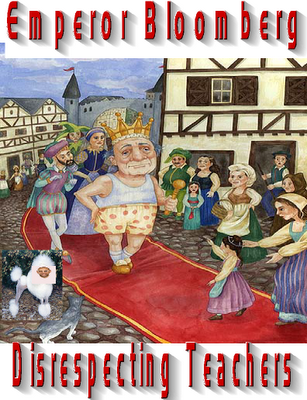 The major question on everybody's mind is what will be the changes in the upcoming 2012-13 school year from the end of the 2011-12 school year?  Not much if you ask me.  Look for a continuation of the Bloomberg attacks on the classroom  True the Emperor lost the "Turnaround schools" battle and blew $58 million dollars in the process but he is still waging war on the public schools.  Moreover, the Emperor's war with the Teachers' union remains in full force as he refuses to agree to a fair teacher evaluation process and will not negotiate a contract that will have retroactive raises even if he "City pattern" requires it.

The only major change will be a weakening of the student discipline code that will make teachers even more powerless to control their classrooms.  The result will be that a few disruptive students will make learning difficult for the rest of the students. No longer can teachers suspend students who are insubordinate, disruptive, or curse at the teacher.  Instead it's parent conferences, assuming the parent bothers to show up or follow up in disciplining their child. My fellow blogger South Bronx School has an interesting article on the weakening of the student discipline code by the DOE.

It's possible, but not likely that the DOE will finally offer a buyout for long-term ATRs but I wouldn't hold my breath on that happening despite the persistent rumors.  It is also likely that class sizes will continue to increase.as the already tight school budgets are required to pay for more non-classroom programs and CFN personnel.

The bottom line, look for the 2012-13 school year to be very similar to the terrible 2011-12 school year as the Bloomberg Administration's war on the teachers' union and the classroom teacher continues as the Emperor tries to close more schools and advocate Charters and wastes a billion or more dollars on technology, consultants, and programs that have little or no positive impact in the classroom. . It is and remains "children last"....Always. under Bloomberg and his pet poodle, Chancellor Dennis Walcott for the 2012-13 school year..
Posted by Chaz at 5:54 PM

The Washington Post's Valerie Strauss knocked it out of the park with her critique, "Why Rahm Emanuel and The New York Times are Wrong about Teacher Evaluation."