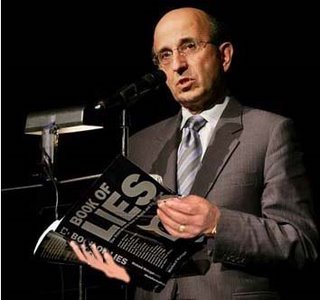 Former New York City Chancellor Joel Klein wrote an autobiography on his life and it turns out that much of what he wrote appears to be a severe distortion of reality.  A journalist and author Richard Rothstein actually researched the facts about Joel Klein's public school days and found out that the ex-Chancellor's claim that he was an indifferent student, lived in public housing for low income people, and was a street kid was far from the truth.  Instead the Chancellor grew up in a two family household, with the father having a federal civil service postal job, and his mother a bookkeeper which placed him in a solidly middle class family situation. He was a high achieving student as early as sixth grade as he was in an accelerated program that squeezed three years of learning into two and was called the Special Progress class, starting in the seventh grade that only the highest achieving students were accepted in. Joel Klein was an Indifferent student? Yeah right, another lie. Moreover, Joel Klein grew up in a middle class 87% white public housing development not a low income minority project like he leads one to believe.  In fact the Woodside Houses applicant needed to meet very stringent conditions.  Here are just some of the 21 factors that can disqualify an applicant at the Woodside Housing Complex.
Obviously, this is almost the exact opposite of what we think of public housing today.  Is it little wonder that the ex Chancellor had an excellent environment to blossom as a child?  His claim that he lived in poverty and was a street kid is a sick joke at best.

Why would he exaggerate his childhood experience in New York City?  The answer is that he wants to show that children growing up in the low income, minority projects of the present can succeed just like him and therefore if they only had better teachers to guide and help these children, then they can overcome poverty and be a leader too Furthermore, it makes a good story, even if it is a fairy tale, and his lies have convinced various politicians like Mayor Michael Bloomberg,  Education Secretary Arnie Duncan, and President Obama himself.  No wonder the education reformers look to him to debunk the poverty argument with their "no excuses" slogan.

It is one thing for Joel Klein to falsely claim that he improved New York City Public School education when he was the Chancellor but it is another thing to mislead the public on his childhood upbringing as if he has anything in common with the single family childern that are growing up in a crime-ridden low income minority housing project and lives in poverty.  To me ex Chancellor Joel Klein is a fraud.
Posted by Chaz at 5:02 PM

Yup - he's a liar and a charlatan and a fraud.

Nothing personal about it.

To critique that fabricated autobiography and point out how full of shit Klein is, that's totally appropriate.

The thing that's truly shocking is how long it's taken for the media to catch on. Of course, now that he's whoring himself out to Murdoch, I'm sure someone will write great reviews of this disingenuous trash anyway.

Anytime I attack Klein or Bloomberg, they say, "Anti-Semite!", as if that's got anything to do with it?
Nobody says a word about those two guys. This City is so afraid of wealth and power, that the last election went straight down the middle- White people and almost the whole of "Liberal" Manhattan voted for Bloomie.
Blacks voted for the black candidate, and NYC teachers didn't vote at all, because they've got to live on LI, where it's safe...

DONT VOTE FOR CHRISTINE QUINN OR ELSE YOU WILL GET MORE OF BLOOMBERG....CHAZ WE NEED TO START PROMOTING THIS... I HEAR QUINN IS THE EARLY LEADER...DONT VOTE FOR HER