Principal Alison Coviello's Motto. "Do As I Say Not What I Do". 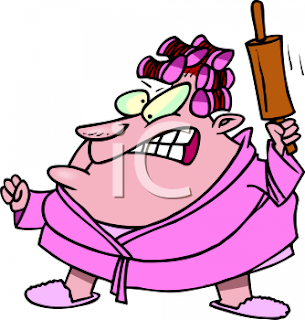 I have been reading South Bronx's running account of his problems with the Principal at P.S. 154, Dr. Alison Coviello.  According to South Bronx Ms. Coviello is an "elitist" who believes in perfection from her staff.  That in itself is not a problem.  However, when it comes to Dr. Coviello actions, perfection is not necessary. She doesn't see a problem breaking the rules for her favorites or for herself for that matter and embellish problems against teachers she doesn't like or want in her school.  If she doesn't like your tone of voice, that's insubordination but of course she can use the same tone of voice on the staff and that's acceptable in her world.

In addition, she practices desperate treatment against staff members that she doesn't like.  Just read South Bronx's running account here, here, here, here. here, and here.  If you demand perfection then you must be the role model for that perfection and not just demand it.  That means when a teacher asks you to "model the lesson" you do it!   Obviously, the  Principal does not "practice what she preaches".

She also apparently broke the rules by not hiring an ATR for a common branch position.  Instead she hired a teacher from the outside the DOE that did not have a common branch license.  Listed below is the advertisement to the Teacher's college newspaper. 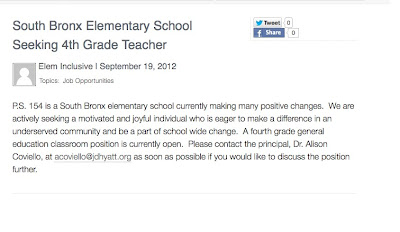 Yes, she apparently broke the rules and ignored the DOE/UFT ATR agreement by hiring a teacher outside the DOE!  Was she punished for this?  Of course not.  Moreover, as a graduate from the infamous "Leadership Academy" she believes she can do as she pleases and if that means harassing senior staff, or ignoring the hiring rules, so be it. Having a hostile work environment seems to be a recurring problem for all these "Leadership Academy principals" and Dr. Coviello appears to be no exception to that view.

It's just another case of the old "double standard" practiced by the DOE.
Posted by Chaz at 6:14 PM

Who would want to work for someone like this. Unfortunately to many of these leadership academy people are in power Recently I went for a job interview. The principal could not have been more than 30 years old. He and the AP laid out there vision of what they expected from me. To me it sounded like they wanted me to be a teacher, guidance counselor and parent coordinator all rolled into one. You could tell they were trained in the leadership academy. I politely declined the position. Good luck to any one who accepts that position.

She sounds like a typical Leadership Academy hack for sure. However, I hear that the "hiring freeze" is now over so she can hire whoever she wants. (Including candidates outside the DOE) I am correct in this point?

This was last year when there was a hiring freeze.

Why did a principal just tell me there's a hiring freeze on common branch licenses if I currently work for the DOE? This sounds crazy!

Note the resume that Jersey Jazzman gave for the kid, sorry, man-- 10 months moonlighting at Newark Public Schools while having another chief position at the NYC DOE --both jobs were as "Chiefs," so probably both full-time. You imagine that he must have really long lunch breaks to go in between both spots or maybe flex agreements to split days between the cities. Now, what, pray-tell, would the DOE if you or I held a simultaneous job or moonlighted at another full-time job?

Of course, the other scandal is that this "school leader" had a mere 2 years teaching, as a TFA recruit, before bailing to Wall St. Here's his $40K/year high school alma mater; sheesh-- imagine those class sizes in your school.