Randi Weingarten's Legacy That Has Made Teaching In The NYC Classroom A Minefield.

There is little doubt that teaching in the New York City classroom has become an increasingly hostile experience under Mayor Michael Bloomberg and Chancellors Joel Klein, Cathie Black, and Dennis Walcott.  However, much of the blame must be laid on the doorstep of our ex UFT President, Randi Weingarten.  The great appeaser.  Under her destructive tenure as head of the UFT she eroded the rights of her members and allowed the DOE to impose programs that were damaging to the classroom teacher.

Let's start with the erosion of teacher "due process rights" under 3020-a  for teachers accused of
incompetence.  Until 2000, a teacher accursed of incompetence would go before a three member arbitration panel to determine the penalty.  The result was the teacher would usually get a compromise verdict and keep their job.  However, Randi Weingarten negotiated with the DOE and agreed to have only one Arbitrator review the incompetence charge and many teachers found themselves terminated. Moreover, in the same 2000 agreement the teacher had no choice in the assignment of an Arbitrator while teachers in the rest of the State have the right to refuse the first Arbitrator offered to them.  In 2002 she allowed the Bloomberg Administration to have Mayoral control of the schools that has resulted in a "rubber stamp" PEP that echos the Mayor's  policy. 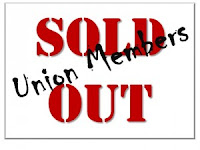 Then there was the terrible 2005 contract that further reduced teacher "due process rights" and caused the ATR crises. Rather than describe the problems associated with the 2005 contract.  Included,  is a legacy of the awful "givebacks" that Randi negotiated for us:  Here, here, here, here, and here!  This contract was an unmitigated disaster and was considered a "sellout" by many of the rank and file.

In 2006 the Bloomberg/Klein Administration imposed a "fair student funding formula" on the NYC public schools.  Had Randi sued or brought the issue to PERB, she would have won.  Instead she remained silent and combined with the elimination of seniority transfer rights have resulted in older and more experienced teachers not being able to get a permanent position. Hence the ATR crises. She also allowed the co-location of charter schools, which was a shock to Joel Klein she since she could have stopped it in its tracks but failed to do so.

Even in the 2007 contract she allowed the voluntary but union endorsed, PIP+, the termination program for incompetent teachers and expanded the list of actions that fell under serious misconduct and ending up with a 90-day suspension without pay or health benefits.  It was during this time that the "rubber rooms" exploded with a maximum of 744 reassigned teachers awaiting their fate.

In 2009 Randi remained silent as Mayor Bloomberg and Christine Quinn overturned term limits that resulted in the disastrous third term and an increase in vilifying teachers that result in the Bloomberg "last in, first out" bill.

Now Randi works on destroying member rights in other school systems.  Washington D.C., Baltimore Maryland, and now Newark New Jersey.   Interestingly, the Chicago teachers told Randi Weingarten to "butt out" and won.  Who can forget she invited Bill Gates as a keynote speaker at her AFT conference who's main idea is high stakes testing and video surveillance of the classroom. Goodbye and good riddance Randi, you have done enough damage to your members in New York City.

Excellent article as always coming from you. What you could have mentioned was that Randi Weingarten also endorsed renewal of mayoral control in 2009. With all of these givebacks plus the new evaluation system in the fall teaching is almost an at will employment. Why is the culture of the union all about givebacks even when they leverage?

You wrote an excellent article. From my memory Randi also supported renewal of mayoral control in 2009. Would you know what was Randi's rationale in each giveback? Randi also started two UFT charter schools. If I am wrong about this please correct me. Why is there a union culture of selling out their members?

Good thing Randi is gone but the damage she has caused has not been forgotten.

I agree she is a sellout and a collaborator with the likes of Gates and Broad.

But, we do need a better system to weed out incompetent teachers. They are the ones who give us a bad name. The district and union in Montgomery, Maryland came up with a plan that doesn't include test scores and does keep due process. It's called PAR because the ruling is not in the hands of just the principal. It includes teachers and an outside principal who many times will disagree with the principal. The results have been good with teachers either receiving an additional year with support, teachers leaving on their own or flat out being fired. In fact the program was so popular, the district refused RTTT funding because they didn't want to tie VAM to evaluations. It's called PAR. I first learned about it when Michael Winerip did an article. There have been follow up articles as well since the program is both fair and balanced and teachers have input. Teachers know their school better than some principals. And we know when a principal has an agenda against a good teacher. We also know our weak links.
Randi instead supported VAM which is an invalid statistical method.

Do you believe the next mayor and the UFT will agree to put a time limit on the ATR's (one year or so)? If an ATR does not obtain a placement during the school year would they S or U for the year? Would they get the one the four tiers (highly effective, effective, developing or ineffective?

I agree with you. I also have heard of good results and satisfaction with this "fair evaluation program". Of course, the DOE just wants to fire teachers and not improve them.

There will not be an ATR time limit. I do believe this is a non-negotiable issue.

I do believe that the current system is unsupportable and the next Mayor will not allow a wasting of 160 million dollars so that either the ATRs will be placed in their district and that they will bring back the November 2009 aqgreement where the schools could pick up the ATR at a "newbie salary".

I cannot see how ATRs can be rated under the new teacher evaluation program. There is no VAM and many are not teaching in their content specialty area.

How can any ATR be rated when so many have covered one class!! But the DoE should be rated for such actions against these students who deserved a full-time teacher. However, the DoE has been having them observed which is also unfair.

What do you mean by ATR getting a newbie salary?? Their salary step wouldn't travel with them?? That would effect their pension.

The ATR's newbie salary would only count toward the school. The rest would be picked up by Central.

It does not affect the ATR's pay.

What is going to happen with the lesson plan part of the new evaluation system? The union filed a grievance with regard to this and would like to know how you think this is going to play out?