The Real Story On What An ATR Costs A School's Budget, Assuming The Fair Student Funding Program Is Not Fully Implemented. 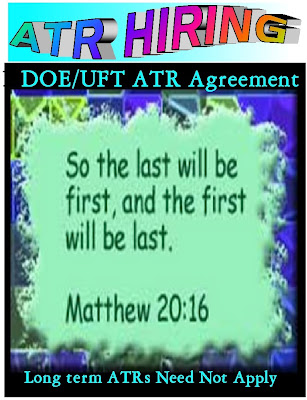 In my last post I received a comment from a high union official who claimed that I was not being factual on how much a higher paid ATR would cost a school.  In my post I stated that a school would be responsible for picking up the difference between the school's average salary and the salary of the ATR.  Well, the union official is correct to a point.  At present, the DOE has not fully implemented the "fair student funding formula" and has a "hold harmless provision so that schools with experienced staff do not lose funding.  Therefore, a school picking up a senior ATR will not be charged any more money for that year and only show a small increase in the "average teacher salary" next year if the ATR remains at the school.   I previously wrote an article that showed how it works in a school budget here.   However, this is the "average teacher salary" so taking the small school example in my post the "average teacher salary" goes up $2,000.  That means the school must pay $40,000 extra for the total teacher salaries. For the large schools in comes out to $25,000 extra. This may not seem significant but don't tell that to the principals who are stuck with very stringent budgets and must pay their CFN's out of their budget. Unfortunately, even this is a temporary measure and compounding the money problem is the UFT agreeing with the DOE that recently excessed ATRs have first crack at any vacancies that further makes it nearly impossible for long-term ATRs to fill a vacancy despite having seniority.  Is it any wonder that many senior teachers have been ATRs for five or six years?

As you can see, from my post back in October of 2011 even in a small school with an untenured teaching staff, a higher paid ATR would cost only $2,000! However, when the "fair student funding program" is fully implemented and teacher salaries will count for 100% of the school's teacher budget.  There will be no more "average teacher salary" calculations, the "fair student funding formula" will be based upon actual teacher salaries and no Principal can trust the DOE from sticking them with a budget that reflects the actual salaries retroactively.  In fact, the DOE has stated their intention of doing so in the future.


While our union leaders reassure us that this will not be the case.  The principals either do not trust the DOE or use this potential uncertainty as one of their reason for not picking up senior ATRs.  Therefore, the result is that ATRs who are higher salaried are left without a job, even when they are excellent teachers and proved it during a long term assignment at a school.

The question is why won't principals pick up ATRs?  The answer is that almost all principals are afraid that Tweed will eventually implement the full "fair student funding formula" going back to the 2008-09 baseline and leave the principals holdiing the bag.

If the union wants to help ATRs they should make it a priority to eliminate the "fair student funding formula"  that penalizes senior teachers and require all excessed teachers to be placed in their district before any teachers can be hired from outside the DOE.
Posted by Chaz at 3:48 PM

Compare some school budgets that have a bunch of newbies compared to a large group of veterans. The principal with the new staff is paying around $30,000 less per teacher on the budget. You can look it up.

Why would any principal, particularly in a small school, want to mess with that by bringing in any veterans? Hiring experienced teachers increases the average salary. Joel Klein knew this when he started the ATR pool and created Unfair Student Funding.

It may not be as high as you say but it's significant I agree with you and so do the union leaders but they won't admit it.

excellent post. Thanks for clearing up how a school's budget works. Whan I asked my DR, he told me that it costs the school only a couple of hundred dollars. I thought he was wrong and now I know now that he was talking about the average salary not the total budget.