Why Teacher Tenure Is Important. 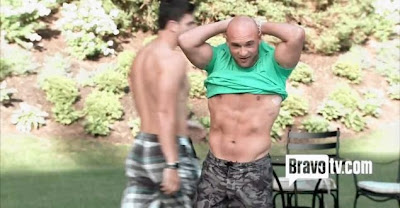 In today's New York Daily News there is a sympathetic piece about a teacher who was pressured to resign from his $75,000 per year teaching position because he was seen with his shirt off.  The article shows a very ripped Stefan Serie who explained that he was an extra on a Bravo show Jewish-American Princesses and at a "pool party" he was seen with his shirt off.  According to Mr. Serie he was summoned a week later and told that his pending tenure will be revoked and told to resign, which is what he did.

What gets me is that many after school sports activities on school grounds will have male athletes practicing without their shirts.  This is called "shirts and skins".  Even female athletes will go with "sports bras" in real hot weather.  Yet this suburban school district decided to terminate Mr. Sire for simply not having his shirt on at a televised "pool party".  Unbelievable.

Interestingly, Mr. Sire is an eight year teaching veteran and untenured which is a major problem when  it comes to Long Island schools.  These school districts are notorious for hiring teachers for a year or two and not give them tenure.  Therefore, the teacher probably had been teaching in other school districts and finally found one willing to give him tenure.

Why did the School District deny tenure to Mr. Sire on such an innocence action by him?  It's because they can!  Tenure is important because it protects teacher from frivolous actions by school administration and false  accusations by vindictive students.  This disgusting action is just another example why tenure is important for teachers.,  In this case one person saw a problem with it and the poor guy now has no job.

That is why teachers cannot allow one person who does not know the facts to decide the fate of a teacher.  Like giving the clueless Dennis Walcott the right to terminate teachers accused of "sexual misconduct" without real evidence and the equally clueless Campbell Brown that cannot even get her facts straight when it comes to how independent arbitration and "due process" works.

See nyc educator blog for another take about this story.

It will be very interesting to see the number of NYC teachers who were denied tenure/had probation extended at the end of this summer. I bet that Bloomie put out the word to superintendents to deny tenure in massive numbers as this is his last chance to screw as many teachers as possible. Lastly, this article does show that tenure is still very important even in the era of VAM/junk science which will screw more teachers than tenure related events such as in this story.

What is your take on what Randi said the other day about bad teachers? Isn't this hypocritical of her to say this when she was barely a classroom teacher herself?