Ed Deformer Cami Anderson's "One Newark Plan" Is A Way To Dismantle The Public School System. 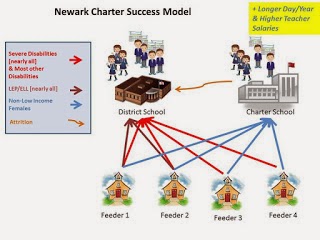 Ex-Tweedie and District 79 teacher destroyer, Cami Anderson, the State appointed Superintendent who now heads the Newark Public Schools (NPS) has proposed a plan to dismantle the City's Public School System.  She calls this the "One Newark Plan".  The proposed plan closes schools, lays off teachers, adds charter schools, and sell off school property.  No where in her "One Newark Plan" does it talk about concrete strategies to improve student outcomes but of course, the idea is to save money not improve student academic achievement.

Ms. Anderson's "One Newark Plan" would allow NPS to lay off 700 teachers, many of the "quality teachers" while adding up to 300 Teach For America (TFA) "newbies" to  replace them.  You think money is an issue here?  Interestingly, in the "One Newark Plan" it talks about having more "quality teachers" in the classroom.  However TFA "newbies" are not considered "highly qualified teachers" as defined by No Child Left Behind (NCLB).  Yes, its about the money! The only thing standing in the way is that Ms. Anderson needs a State waiver to layoff the 700 teachers.  Unfortunately, the State Commissioner is another ex-Tweedie and fellow ed deformer Christopher Cerf.  Therefore, there is a strong chance that the State will approve the waiver and seniority based layoffs will be overridden by the waiver.

The "One Newark Plan" is simply an "education on the cheap" policy that will do nothing to improve student academic outcomes and with "unqualified newbie teachers" can actually hurt student academic.  achievement. When ed deformers take charge of a school system they implement policies that don't improve classroom instruction but try to impose questionable programs that don't seem to work.  When this happens they blame teachers,school administrators, and union rules while never being held accountable for their own failures.

Children first?  Not when ed deformers like Cami Anderson are put in charge of school systems since their primary concern is to run the school system as a business and ignore the very real social-economic factors, like poverty,  The result are lean school budgets, "unqualified teachers", and programs that don't work in the classroom.  Does anyone really think that improves student academic achievement?  I don't, how about you?

For more information on the Newark Schools go to the Bob Braum's Ledger blog.  Another Blog of interest about the Newark schools is Jersey Jazzman
Posted by Chaz at 4:42 PM

Totally disgusting on many levels. The UFT should help as much as possible (don't laugh- I know it's pathetic). The Walton family is involved in this also; I guess billionaires always know best.

This whole public school teacher demonizing and union smashing thing is why it is crucial that our new mayor succeeds in every possible way imaginable. He is a known friend to unions. The cynic in me and others here will say we will see how much of a "friend" he is to us in the coming months when we probably get our contract by June. BDB's mayoralty will be an experiment in progressive government that will be studied and analyzed closely on a national scale. If he is successful and the city is flourishing in four years, and he takes care of the workers and the middle class, public school teacher destroyers like Cami Anderson would be neutered and rendered powerless, since she and others like her will have no anti union, anti teacher, anti public servant soap box to stand on. This is why everybody needs to support BDB, and cut him some slack as he tries to get his agendas off this ground. THat non-snow day needs to be a hiccup in his ascension as a great NYC mayor. It can be argued that all unions have a vested interest in his success and legacy in order to hold Anderson, the Waltons, the Koch Bros. and other evil union enemies at bay.

Hey Chaz ~~ a great read HOWEVER, time for you and everyone else to get a grip and face reality. You can write blogs for the next several months and years but it doesn't matter because ........ NO ONE GIVES A SHIT MAN!!! You would think that your blog informs people and shines a light on Cami but it just doesn't matter. No one cares. Not much matters. These posts and write ups are so sad and makes you wanna scream BooHooHoo, but we all know the truth pal, no changes ever. Even DeBlasio is making room for co-locations. Everyone's full of SHIT!!! You take things to serious. I learned a while back to just laugh. I don't read much anymore because it's all nonsense. No one knows nuthin'. Everyday there's this story and that story. I guess people have to write about something. If Cami was doing something so trajic, don't you think it wouldn't be allowed?

I did not realize that Ms. Anderson & "Reformy John" King were related. Great contract the AFT negotiated there in Newark. I guess we need to see more facts before we pass judgement on this, huh, Ms. Weingarten?

Cami was thrown out last night at parent meeting in NJ by the parents. This dame is just another one of the people who seem to "care" about education like fat ass chris christy cares about traffic at the gw bridge. Remember, people will do anything and believe in anything for the all mighty dollar and cami is just another dame trying to make a buck. Christy probably goes to the toilet several times a day has anyone seen the size of his butt?? uhhh.

Watch out for the success academy whatever charter school buses headed toward albany to see who ms. moskowitch can bribe into giving her school space inside nyc schools. The sorry word for ms moskowitch however is that her ole friends mikey bloomshits and the devil himself klein are no longer around. Lets keep an watchful eye for those buses which will surely be covered by the rags post and dn. The cavalry will return with their tails between their legs.

Yes, I saw that moskowitch is planning a trip to albany. Word is that moskowitch has a bag full of money and is looking for anyone who will accept the money for space inside of our precious nyc school buildings. Hey Eva, give Mikey a call and have him build you a few schools - why not? He gave you the store when he was mayor of nyc using the tax payers money lets see how much of a buddy mikey blooms is when you ask him for favors with his money

Can someone go over to the ny post and bump slap that idiot out of touch antiquated writer michael goodwin. This clown is still writing articles claiming that deblasio will "give in" to the teachers union:
"de Blasio will never make a dent improving student performance if he caves into union demands for more pay without major concessions".
What major concessions is this rag reporter referring to?? (Goodwin is Such a smuck because you can tell that his journalism is strictly to please the editorial freaks at the post) What concessions will lead to improving student performance?? I hope he is not referring to the raise that is due teachers...this clown writer at the trash post is so out of touch and his political jargon is always one way and so what happens is that most readers start to tune out a writer who seems to write about the same things for the same people - we saw much of this during the bloomshit reign of terror.

Cami anderson has a forehead the size of a wide screen movie theatre. This is one butch of a woman who really looks like a guy with the huge forehead it appears as though she has a receding forehead but this looks bizarre as she is a woman - supposedly. She is the scapegoat and the one selected to do the dirty work but can she do it? Is she butch enough to kill the lives of so many dedicated education professionals and hire scabs? This cannot go down. Get a wig!