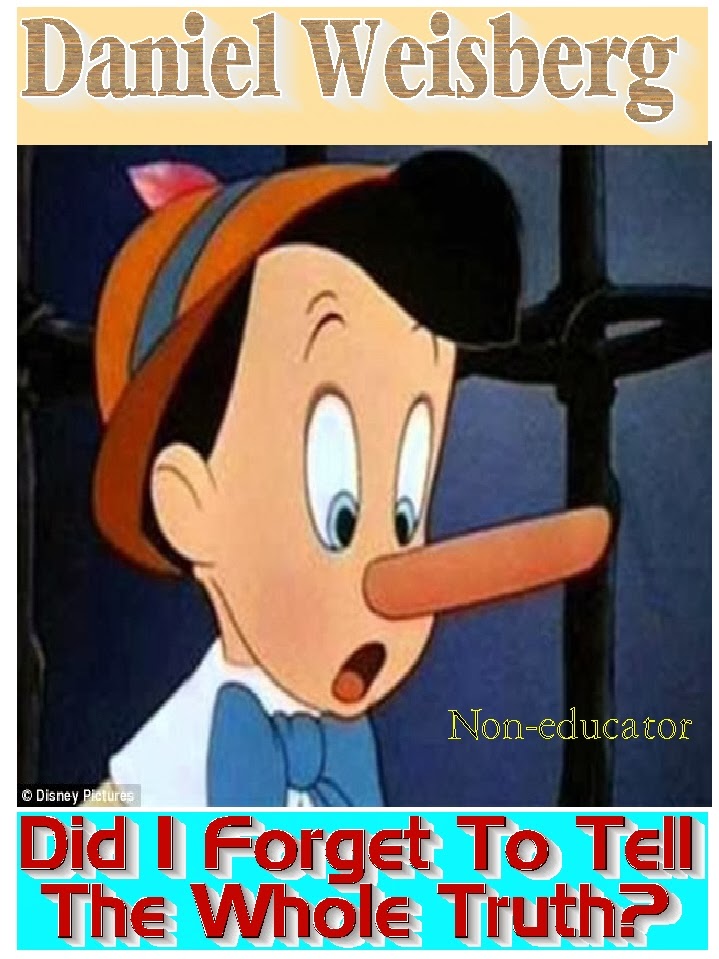 It seems the education media offensive continues against the ATRs as the New York Post published an opinion piece from non educator and ex flunky of Joel Klein and former Tweed lawyer Daniel Weisberg.  Mr. Weisberg is now Executive Vice President and General Counsel for The New Teacher Project (TNTP) which places "newbie teachers" in high poverty schools.   In his article, Mr. Weisberg made no bones about that ATR teachers are "bad teachers" as the heading to his column states.  Mr Weisberg explains how proud he is to have negotiated the ATR pool into existence by his "mutual consent"  agreement that allows principals to decide who to hire.

Mr. Weisberg falsely claims that many of the teachers in the ATR pool are not looking for a position.  In fact he claims 60% don't want a position because they haven't bothered to apply on the Open Market Transfer System. Of course he failed to mention the Open Market Transfer System is a joke and iis only good for lower paid untenured teachers who want to escape high poverty schools as highly experienced teachers never even get an interview!  I wonder why that seemed to have slipped his mind?  While Mr Weisberg doesn't say the ATRs are undesirable,  however, if you read between the lines he does insinuate it by saying principals rather not hire them.  His solution is a six month to one year ATR time limit and then be terminated if they fail to land a position. Just like all other education reformer proposals which ignores the real cause of the ATRs not being able to obtain a classroom position. Of course, Mr. Weisberg conveniently left out why there is an ATR pool and why principals are not hiring them.  Why would he print the truth since it would show what a hypocrite he is?  Here is what Mr. Weisberg decided to leave out in his article.

First, there is no mention of the "fair student funding formula" that discourages principals from hiring the "best teachers" just the "cheapest".  Combine that with a 14% reduction in school budgets and no Principal will be willing to hire a senior teacher no matter how "qualified" that teacher is.

Finally, he knows quite well, since he negotiated the contract with the union, that the union can't reasonably put a time limit on the ATRs since it may violate Civil Service Law and start a "slippery slope" and a reduction of Municipal employee rights throughout the City.  The result would be a Municipal union lawsuit that would put a halt to any such action.

Mr. Weisberg is just like all the other non-educator pseudo-reformers who ignores the truth just to publish his flawed point of view and despite his claims it's not what's best for the students of the New York City Schools but what's best for his organization..

Weisberg is a piece of shit. My buddy Michael Best used to tell me the funniest stories about him. He's a real miserable dirtbag who is clueless about the truth of how hard it is for an ATR to land a real teaching job. Best would tell me how he'd try to hit on the younger girls right out of college at Tweed. They all would crack jokes about him and his ugly wife behind his back. A true degenerate scumbag. He's perfect for a fake group like the new teacher project, another non needed group that does nothing and will never account for increasing kids scores, etc. He's a waste along with TNTP. Weisberg, you're a pathetic bastard.

I agree wholeheartedly. I found that editorial to be the most offensive of all the recent trash. I went on a middle school/ high school tour for my child in Yonkers recently. The school was large, needed alot of repair, and looked like they could use computers and books; but the kids (who are mostly poor) were on task, respectful and disciplined. I asked the ap how it's done. She responded that 80% of the staff have 20 plus years of experience. I was in a similar school (middle/high) in the South Bronx. Beautiful building, laptops, new equipment, etc.; but the kids are completely out of control, have their cell phones and iPods out, and constantly curse out their teachers. I went to the principal there to complain about some of the outrageous stuff I witnessed ; he said it wasn't the kids fault; 85% of his staff have less than 5 years experience. I'm a highly qualified teacher with 23 years of experience who has to go to a new school weekly to babysit, while the students are left with inexperienced,
well intentioned individuals.
There in lies the gist of everything that is wrong with the current state of mis-education in NYC.

Chaz,
I gotta tell ya, I'm beginning to feel like Fariña is not the person I thought she could be. I know it's early but she's really not given any statements on defending veteran teachers. This is odd since she's a veteran. The issue with that principal Sils was a bit shocking too. The "networks" are a disaster and are choking principals, not releasing $$$ as districts used to. They keep the $$$ all to themselves. Fariña is really not indicating the "change" that was mentioned. Maybe they're waiting until September for a fresh school year start? Maybe the "big changes" are being worked on now? There's no indication on anything. It's really bad. Just seems that she's selecting people from Brooklyn for her team. She's really not off to the best start.

It is obvious that Weisberg is a total tool. Why does he use the word "hire" when he refers to ATR's? The fact is that ATR's are already employee's of NYC. They were "hired" by the BOE (Now the DOE) long before Weisberg was even a speck of dirt in the educational world. ATR's are no different from police officers or firefighters who work for this city. If a firehouse or precinct gets ever gets closed down, those cops or firefighters get placed according to seniority. They do not need to get "hired" by anyone. And I whole hardly agree with the commenter that asked where Farina is in all of this. Many teachers have gave her the benefit of the doubt by waiting a few weeks before she cleaned house at the DOE but the fact is we have not hear a PEEP from her about what she actually intends to do to get teacher morale back on track.

I really don't know that what you say is true but its non-educators like him who made Tweed a gotcha group that looks to demonize and terminate teachers.

I totally agree with your comments. That's why I believe if the union agreed to a time limit, the other unions will sue as a violation of Civil Service Law.

Thursday, snow day. No teachers at my school. Bunch all the students in the cafeteria. Put in Shrek. Great idea. What a waste. At least I didn't take sick day. Yeah!!!

DeBozo, "Everyone stay home and off the roads, its dangerous". Schools are open; teachers and students must not count, except when marking them absent.

I'm beginning to feel DeBlasio is out of his element, which is ok, if he has common sense. I don't feel he does however. He's being overly cautious in hedging his bets and thus making serious mistakes. I hope today is not an indicator of the next four years.

Today is so much fun. I'm still at my school. One room was used for chess tournaments. The next was board games. Another room was the movie room. Kids chose a room then rotated all day. What a blast. This is so awesome. My principal called out too. It's a shit show.

Both DeBlasio and Farina came off as fools. Good start!