The Contract, Teacher Retention, And The Upcominig Teacher Shortage. 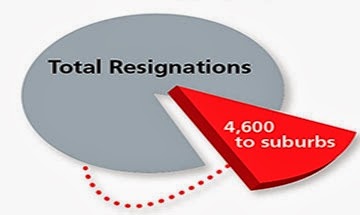 Lost in the million dollar propaganda blitz by Eva Moskowitz and her allies in the Senate and Governor Andrew Cuomo is the coming shortage of teachers as many veteran teachers are expected to retire in the next five years and the new State requirements to be a teacher will discourage many would be teachers from joining the profession.  It certainly doesn't help when the ed deformers continue to demonize teachers and want teaching to be a stopgap job as it is in the charter schools. Presently NYC teachers are subject to an evaluation system that can lead to "ineffective ratings" and eventual termination based upon "junk science", where too many teachers leave the system, and as the recession continues to wane, fewer people will be interested in going through the increasingly difficult requirements to be certified by the State.While the New York City school system continues to have a teacher attrition rate of close to 5,000 annually, the new contract, whatever it will be, will probably increase the attrition rate as many veteran teachers take the money or service credits and leave the system for good. To stem the ever increasing teacher attrition rate the City realizes they must not only raise teacher salaries to competitive levels but reduce the hostile classroom environment that existed under the Bloomberg/Klein/Walcott administration and still exists now.  Only a combination of factors that includes significant pay hikes, classroom improvements, and teach respect will keep the veteran teachers from leaving the system.  A real balancing act to say the least.

That brings me to the contract being negotiated by the City and our union.  The New York Times reported that the De Blasio Administration has suggested a 9 year contract with the retroactive raises spread out for the nine years of the contract.  The good news is that we get our full "retroactive raises", the bad news its in drips and drabs and a few of us will be dead before we see it in our pension.  I prefer the City proposal to the PBA and exchange retroactive pay for service credit.  The problem giving service credit to teachers is the difficulty to hire enough certified teachers to replace them and the City would probably rely on Teach For America and Teaching Fellows to fill the gap. Having an influx of these untested and poorly trained "newbie teachers" is not conducive for improved student academic achievement.  Retaining veteran teachers not pushing them out should be the main objective for the City. Therefore, the contract being negotiated will probably be what the New York Times reported.  However, I do hold out some hope that the "retroactive raises" are only stretched out three years not nine.  Also maybe a limited "buyout option" that gives a person an extra two years of pension credit if they retire within a given time period.

I don't believe there will be an ATR pool next year as both the City and union needs the teachers back in the classroom to reduce class size and to provide the ever increasing ICT classes a second teacher in the classroom.  Furthermore, the ideological reason to waste 160 million dollars annually left with Bloomberg. To achieve this it will require the elimination of the "fair student funding" formula and an immediate hiring freeze until all the excessed teachers in a district is placed. Finally, I do believe the City and union will agree to a more reasonable teacher evaluation system that will make it less time consuming and appropriate for both the teacher and the administrator.

Chaz, I think this nine years includes the five we are already behind.

Teachmyclass, you're exactly right. The nine year contract would cover the years 2009 to 2018. Chances are, we'd probably see the retroactive payments over three years, beginning with the first payment later this year. What will be interesting however, is what pattern will we set set for the years 2011 and going forward to 2018 in terms of increases. I can't see any year giving us more than 2% starting from 2011. Also, will they pay us retroactively not only for the 4% and 4% from '09 and '10, but also for '11,'12, '13? This contract will be interesting, as well as very confusing.

The problem with the service credit years and TFA's filling in as the new teachers (to replace those leaving) is not their inexperience but the fact that too much money will be being paid out in pensions and not enough will be replaced by the new teacher's low salaries. This is the problem that was discussed in the police blog's comments...

Anyway, it should be interesting. Definitely the end of ATR's and I also agree that the teaching shortage will return again once the economy picks up. It's been a strange past few years...

Many years ago on he wonderful Seventies, the UFT negotiated a deal with the city. The agreeent was to pay teachers a bonus 9f $700 but with the money deferred because of the fiscal crisis.
We eventually got the money - $200 a year for three years and a one hundred dollar payment in year four. The money came taxed. I remember getting a check for two hundred dollars and couldn't remember what it was for!
When it comes to paying out back wages the city gets very creative.

How about getting rid of lunch duty!!!!!!

Look for a longer school day or year. Look for paying for part of your health care. Service credit will be offered. The ATR pool will be back, albeit much smaller and staffed with CTE teachers and those that are hard to place. Look for an unprecedented mass exodus of veteran teachers, as the teaching profession continues to decline (into something resembling a peace corp stint in a third world country). New teachers will rarely make 5 years, which is the plan, ( as proposed by Arne Duncan). Also technology will be increasingly used to displace large numbers of teachers in the coming years. Privatization of schools will continue, with an almost complete erosion of rights to those teachers who find themselves there, with Eva Moskowitz taking credit for being a pioneer in NYC. If you're a teacher get out as soon as possible; if you want to become a teacher seek psychiatric help.

Don't count on the economy picking up any time soon...as in at least 5 years.

I agree MIGHTY EVA'S SALARY WILL DOUBLE AS SHE IS THE NEW PRINCESS OF EDUCATIONAL REFORM ...Media tycoons and almost all political parties will jump on the Eva bandwagon and continue to attack our failing public education. The teachers will get the blame and the backlash of a deteriorating society. Am I really saying anything new?? writing is on the wall ..Even if DeBlasio is for us ..there are so many that are against us..and I am an optimist..When the charter schools fail they will then blame the charter school teachers..cant blame the families that fail their children Just pass the buck

Just give me so damn service credit. I have become so ineured by the doe over the years.

Carmen Fariña cannot restore the values to the teaching profession. It's a mess. I'd like to take the opportunity to thank my family who helped me purchase a home in westchester. My kids attend scream school district with actual respect for the teachers and community. There are no bullshit networks, no fake ass pretend coaches, no morons parading in and out of schools for no reason, no collocations, and most of all, no credit recovery bullcrap. There's actual teachers here who are treated right!! I can't believe what I see, a different world. I drive home to paradise from my day in the jungle. F the DOE and seriously, this new administration is putrid!! Hey, let's put 15 schools in 1 building and have 15 principals and 40 AP's. Let's try that Carmen. You can keep feeding and feeding these networks. My BS networks headquarters in in a separate borough. The parents ask me what's a network? I shake my head in disbelief. Sad. Very very sad.

I want the service credit- and badly. This would also be a way for the city to eliminate a good number of ATRs, who are probably just trying to hang in until the can retire- for them, it would be a blessing.

The sooner I can get out, the better.

. A lot of teachers will quit if the school day is longer. Many teachers live on Long Island and will not deal with sitting in traffic any longer than they already do. Many teachers are at the breaking point so the raise needs to be significant.

I do not want the UFT to be the union to set the "next pattern". I prefer it be the cops and firemen. I want to hear someone call them greedy and lazy.

4 years of service credit sounds great...but you would still need to hit 30/55 to collect a decent pension?

De blasio is not for us if we're not getting placed. No change from Bloomberg administration.
Fair student funding has to go or else principals will not want to hire us.
They'll take newbies regardless of their lack of experience.