How The DOE Budgeting Process Forces Principals To Cut Corners At The Expense Of Their Students. 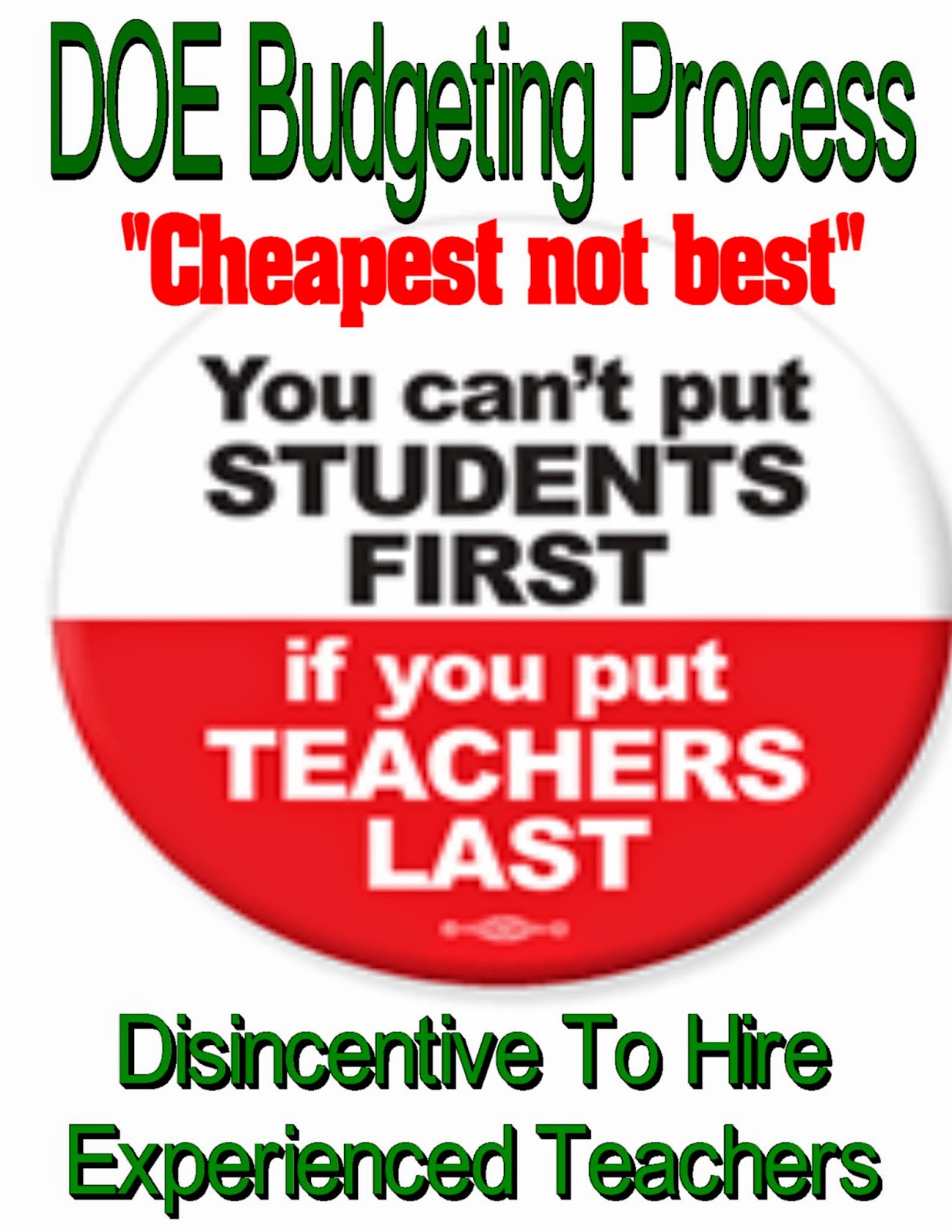 Under the Bloomberg Administration there were many changes to the decades old Board of Education. Most of them bad. First it became the Department of Education, then the Superintendent staff was replaced by the useless and money sucking "Children First Networks" (CFN) effectively excluding parents since many of the CFN's were located in different Boroughs than their child's school. The administrative quality of school leadership saw a sharp decline as the Bloomberg administration tried to use a "corporate model" that saw non-educators take charge of the DOE at Tweed.  The DOE experienced large increases in hiring accountability managers, lawyers and no-bid high priced consultant contracts.  All this took away money that could have went to the schools and the students.   Additionally, under Michael Bloomberg's tenure approximately 163 schools closed, including most of the large comprehensive high schools and the DOE, through the "Leadership Academy" was giving principal positions to people with little or no classroom experience for the newly created small schools. However, the worst was the new DOE budgeting process that dumped the salaries of staff on the schools and combined with the "fair student funding" forced principals to seriously consider salary when hiring teachers.  The result was a younger, cheaper, and inexperienced staff which is what Mayor Bloomberg was hoping for but didn't result in better academic outcomes for the students but then it never was about he students.

In the last term of Michael Bloomberg's tenure class sizes rose, schools closed, and veteran teachers found themselves out of  their classrooms with little hope of landing a new one because of age and salary.  Combine that with the "Leadership Academy Principals" who are encouraged by their CFN's to hire "newbie teachers", and the demonetization of veteran teachers the ATR pool exploded and is 2,000+ strong. Has this helped student academic achievement?  The answer is no.  In fact the income/racial academic achievement gap actually widened over the Bloomberg years.

First, the principals are hiring the "cheapest" and not the "best teachers" for their students due to DOE budget restrictions.

Second, class sizes are getting larger as principals are "packing students in" to save on teacher salaries.

Fourth, Advanced Placement courses are being reduced from double periods to single periods.  How many students will get college credit with that handicap?

What is the solution for Principals to do "the right thing" for their students?  Simple, eliminate the "fair student funding" and make teacher salaries as units and coming from DOE Central.  This will eliminate many of the "shortcuts" that Principals must do to save on their budget and help improve student academic achievement.  Its "children first"...right?

Great piece Chaz. Speaking of high priced ridiculous consultants, have you heard of the Aussie group? A consultant group who had been making 10 million plus each year. In 2012/2013 the Aussie group was given a 15 million dollar contract for the year. What a waste!!! These pathetic Aussie's still come to my school, standing before me and colleagues, telling us methods on teaching. I can't believe they think we are listening. They are the laughing stock at every school. Imagine if these Aussie's ACTUALLY TAUGHT 5 periods a day like me with 32-34 kids in each class, day after day after day? It's disgusting that these Aussie's are still allowed to pretend like they know what they're talking about and actually lead a PD. What the F##K is Fariña doing?????? Dump these freakin Aussie's already and give back the 15 million to the kids. They also get out up for free in Manhattan on the West side, 42nd street. All free and guess whose paying?
I had a conversation with one of these Aussie's. He was so clueless and asking me about how this works, that works, the students, etc. This SHMUCK is making big bucks and lives in Manhattan (on the house) while dingbats like me are working 5 periods a day, week after week, year after year while Aussieshmuck and his group (Murdoch's Austrailians friends) are making 15 million a year thanks to pal Bloomberg. Does Fariña even know these Aussie's? Get the F##K outta here!!!!!!

To 227,
Completely true! They're very nice people who are clueless. They are completely oblivious about the ghetto (non) culture of the Bronx. Owned vis a vie Murdoch. It can't be audited because it's held outside the USA, in Australia. There's a lot of unethical, perhaps illegal manipulation of educational funds going to Bloomy's friends. It needs to be investigated- bet it won't be done by the NY Pox!

(And it's a lot more than 15 million- that wouldn't cover the airline tickets and hotel costs.) But they're not the worse- Pearson has got that title. Ridiculous books, staff development and tremendous amounts of money siphoned away from schools. Then you have technology that isn't being utilized because it's broken or no one has been trained to use it. I was in school recently where every Smartboard was broken and where a laptop is stolen almost daily. The teachers can't even get a photocopy and the Pearson books are used as doorstops and window projectiles.

The Aussie's come to my campus in the Bronx. They are the nicest people BUT the biggest waste. They absolutely are 100% USELESS. They are purely defined as USELESS. Nice people to hang out with at a picnic or lounge but to actually see their 15 million $$ contract is disturbing. I mean how much more wasteful can you get? Chaz you shd try to do a story on these Austrailians who come here to nyc and make a fortune for no returns. Do you think the kids are getting smarter due to them? Do you think scores are going up because of Aussie's? They are a WASTE!!!!!

"All this took away money that could have went to the schools and the students."

Call me a grammar cop but I am mandated to ask what's wrong with this sentence?

End the Leadership Academy since these principals never taught. Beef up discipline in the schools. Go back to the 600 school concept for chronically disruptive, unruly pupils. You can't teach without discipline.
Get ATR's back in the classroom. Lower class sizes.

Instead of worrying about a phony grammar issue, how about adding something constructive?

The Aussie have been in the NYC public schools since the late 1990's. I would rather have them any day over Pearson. At least the PD is somewhat helpful and is gear to the student's grade level. The one thing that I don't like about the Aussies is that they don't hire any of us Americans. Why? Because they pay is just too good to share! $1500 a day and a free apartment in midtown is hard to pass up rather than living in the Outback!

Agree with chaz Do we need the grammar police on these blogs ...try to look at the big picture people and add something usefull

An Aussie and I got close last year. We would do drinks on Fridays sometimes. On one occasion, we were in Manhattan and he had to get his wallet as he forgot it home. He brought me to the suite on the west side of 42nd street. Beautiful complex, doorman, top notch. Told me the city puts them up for free and they make a hefty salary. He told me they just make copies and handouts. They are told to keep the principals happy and look good. They are also partnered with New Visions. They're all making a fortune for no reason. It's really insane that it's just allowed. It's like no big deal, actually ok that this is going on and no one knows about it, until now.

Hey Phil,
Wings Academy in the Bronx is looking for an English teacher. I'm sure they'd love to have you!

Phil, you're such a dork for even writing this. Get a life dork boy.

Reading your blog is like waiting for the next episode of Game of Thrones. I can't wait for what happens next! Your analysis and insight is cool calm and collected. Your statements regarding the ATR situation is accurate but is only the tip of the iceberg in regards to the abuses ATRs endure. Not all schools are abusive or disrespectful.Some are inclusive warm and offer collegiality. However there is evidence abound on how age, race and expertise discrimination is rampant. As you very wel know the segment in the MOU agreement of 2014(aka contract proposal)segregates and targets the ATR teaching force and from the looks of it violates federal tenure laws. I wait your next blog and thank you!