In This School Its Technology Over Quality Teachers. 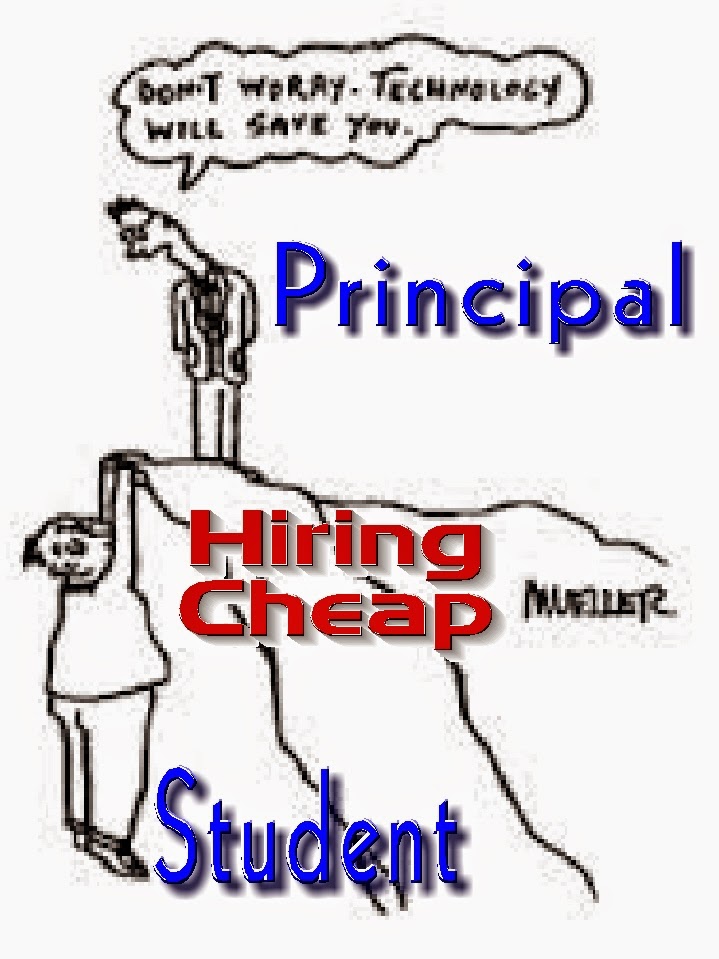 In a highly regarded large comprehensive high school in Northeastern Queens, a Principal is practicing his own version of "education on the cheap".  In my opinion he is using precious school funds to upgrade technology while paying for it by scrimping on teacher quality in a school known for having highly experienced teachers.  In the long run this can only hurt the academic outcomes of his school's students.

The Principal is a big fan of technology, the more technology, the better.  He is installing all his classrooms with expensive state of the art technology.  That might be all fine and good if there were dedicated funds for such a project.  However, under "fair student funding" all the funds supplied to the school can be spent in any way the Principal pleases.  Therefore, many principals "rob Peter to pay Paul" to fund their pet projects and this Principal is no exception.  How is the Principal paying foir this lavish upgrade of technology at the school?  You guessed it, its at the expense of hiring quality teachers for his school's students.

Since he took over as Principal two years ago, his hiring pattern is to select "newbie teachers", right out of college to fill most of the positions in his schools.  Few experienced teachers were hired and none of them could be considered highly experienced.  As for ATRs?  They need not apply since he has let it be known that ATRs are not appropriate for his school.  Moreover, to limit the amount of teachers the school needs to hire, he encourages teachers to pick up a "sixth period" and if its in a shortage area better yet since DOE Central actually picks up the tab for the extra class.  Interestingly, he has told at least two people that he only wants to hire the best teachers not just good teachers.  Somehow his deeds don't seem to match his words.

For example, this year his Science department was in need of a Chemistry teacher to fill in as a leave replacement.  Instead of interviewing the Chemistry teachers in the ATR pool, the school hired an unknown  substitute teacher to fill the leave replacement.  Unfortunately for the students, this teacher proved to be terrible and the students complained about him.  Now almost two months later the teacher finally decided he didn't want to be at the school and resigned before he could do any more damage to his Regents Chemistry classes.  The result is that these students are behind their peers academically and all the Chemistry teachers were forced to pick up an extra Chemistry class, whether they wanted to or not.

The DOE must be proud of this Principal as he follows their "education on the cheap" policies of Tweed at the expense of his school's student academic achievement.

My principal is replacing the library with a computer lab. No word yet as to the fate of the books.

How was this school successful all the years before they had technology? Experienced teachers.

Bayside? I have a few horror stories with that place.

Most places I go, I have no idea who the principal is. Many payroll secretaries are demanding that ATRs punch in, and do menial clerical work. This type of behavior has increased greatly this year. This never happened to me last year. If you refuse you're met with extreme hostility and a potential call to your ATR supervisor. If you call the union they ethier tell you to do it or don't return your call or email. So exactly what's the reason the UFT is dead set against us having our own chapter?

No, Anon 8:34 PM, this is Francis Lewis' story and I am there to know. The Title I money is all going to these new toys and not to lower class sizes.

There are many extremely dangerous high schools in the Bronx. Extremely dangerous because there are no metal detectors and the students are armed to the teeth. New Explorers HS (concourse village), Bronxwood (aka Thugwood), Wings are the worst. Bring a bullet proof vest with your generic lesson plans.

It is such a contradiction question and the definition “good teacher” is quite vague. I can argue for a long time because a teacher with a great experience is not always the best ones as such professionals don’t always have a desire to improve their skills, thinking that they are perfect, while specialists who were students only yesterday are eager to gain professional success. However, I should admit there are some graduates who seem to be talented only at writing students' uk essays and despite their perfect grades cannot be efficient.