The DOE Bureaucratic Machine Is Broken And Only A Complete Overhaul Will Fix It. 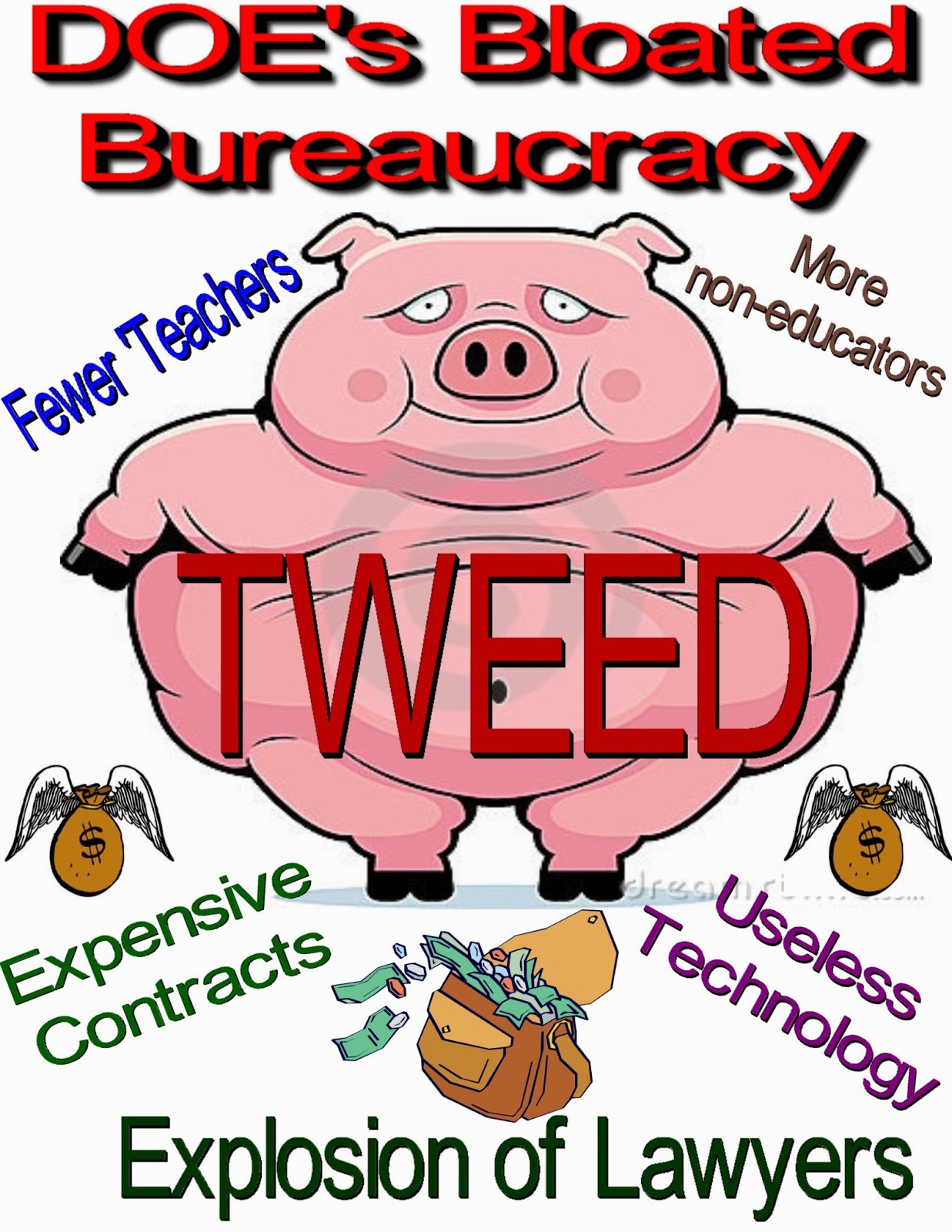 Educators have known for years that the DOE is dysfunctional and broken and is need of a complete overhaul.  There was a momentary hope that the new De Blasio administration would appoint a Chancellor who would sweep out the Bloomberg era policy makers.  However, the new Mayor appointed Carmen Farina who has been a major disappointment, to say the least.  She has retained the Bloomberg 300 and even promoted Bloomberg era holdovers such as Kathleen Grimm, known as the "Grim Reaper". for her part in closing many of the large comprehensive high schools in the city.

To many of the schools, little has changed, with frozen budgets, the continuation oi the useless and

money sucking "Children First Networks", and the top down management from the bloated bureaucracy, full of high salaried managers and high priced consultants.  The disappointing Chancellor has not reduced the obscene number of people in the accountability and legal departments that exploded during the Bloomberg years   Moreover, her failure to eliminate the perverse "fair student funding": formula that has resulted in principals having to hire the "cheapest and not the best teachers" for their school and to allow for the continuation of the ATR pool have added to her disappointing tenure as Chancellor.  Finally, in an effort to squeeze every dollar out of an already tight school budget, she has failed to reduce class sizes or hire the proper amount of school staff, be it teachers, guidance counselors, and librarians at the expense of their students' academic achievement.

Unfortunately, Chancellor Carmen Farina's tenure has resulted in little change from the Bloomberg years and the DOE remains bloated, dysfunctional, and lacks transparency.  Furthermore, the excessive paperwork required by the DOE for their mindless data mining projects continues and the hostile classroom environment still exists to this day. Until the DOE's bloated bureaucracy is  completely overhauled, don't expect any real change in the classroom and student academic achievement.

update:  The DOE has finally taken its first steps in eliminating the useless technology called ARIS.  A $95 million dollar failure in which only 16% of teachers and 3% of the parents actually bothered to use the system.  This was Joel Klein's baby and the DOE kept it despite its obvious  failure.  An added bonus is that Joel Klein's company Amplify, will also lose their contract to service ARIS that has cost over $10 million dollars since 2012.  The Daily News article is Here.

The Union is also broken. Where is the union when members are being trampled and abused? We all know the union is a dues collection agency. It takes two and the union should also be held accountable for the mess we are in. As you said before Chaz it was our union leadership that went along with mayoral control, co-locations and the fair funding formula. The formation of a new caucus is a step in the right direction and hopefully can make an impact.

Until the DOE rids itself of the HUNDREDS of attorneys it employs to "get" the teachers, NOTHING WILL CHANGE...

Many years ago, I proposed getting rid of the BOE's central authority in favor of 5 smaller, borough boards for the same reasons Chaz lists in his article. Localization aids in the familiarization and the taking care of an areas own schools and problems. Bourough boards can handle school issues relevant to their own areas. Makes life simpler.

Guess what? When Carmen goes back into retirement again, nothing is going to change...and the public doesn't care. So what then....highlighting the dysfunction is not going to change it. And also bear in mind that everything that is in place is being allowed and approved by people who are above her. Yeah, she has a great deal of power and influence, but not as much as you might think. So blaming her solely is a little shortsighted.

A good way to start is to close that 'Klein Palace' at Tweed and eliminate as many wasteful bureaucratic positions as possible. Although most principals surveyed during the spring-say they feel more comfortable with Farina compared to the Klein/Walcott years--they still mistrust with the DOE and they want an end to the impractical and non-geographical CFN system.

Retirees need to get paid before the year is over. We won't get interest on this money. If deBlasio got rid of CFN,they would find $50 million for the retirees.

If there is going to be any constructive change to the DOE waste of taxpayer money it would have to happen through an outside office. The most suitable would be through the Office of the Public Advocate, currently Letitia James.


The job of the Public Advocate is, most fundamentally, that of a watchdog, ensuring that all New Yorkers receive the City services they deserve and have a voice in shaping the policies of their government.

The Public Advocate is a non-voting member of the New York City Council with the right to introduce and co-sponsor legislation. The Public Advocate also serves as an ombudsman for city government, providing oversight for city agencies, investigating citizens' complaints about city services and making proposals to address perceived shortcomings or failures of those services. These duties are laid out in Section 24 of the City Charter.

They're going to need that 50 million to pay for all the lawsuits once DiBlasio allows cell phones in (and metal detectors out of) all the warehouses (high schools) in the Bronx.

The cost of the obsolete ARIS is just a drop in the bucket of wasted spending. I wouldn't be surprised if the DOE is spending double or triple that money with the implementation of ADVANCE and all the other wasted bureaucratic initiatives such as School Progress Reports, Environmental Parent Surveys, School Quality Reviews--- which is being revised for about the 5th time in the past 6 years.

How is Kline making 10 million annually from a useless service not stealing from NYC taxpayers!? Bloomberg should be brought up on charges. The Aussies, Pearson, Eva's bullshit charter company and the other pseudo ed businesses should be investigated by the attorney general. I'd love to see Bloomberg get what he deserves. Move to London, the British can have you!!

The DOE is wasting insane amounts of money. Teachers have 34 kids in class, many kids aren't getting mandated services, it's 95 degrees in every building, no textbooks, no supplies, no copy machines, teachers just out of college (with experienced teachers, ATRs, babysitting), no suspensions, no arrests, no metal detectors in many schools, no SAVE rooms, cell phones coming to a class near you soon--well you get the idea. The DOE has nothing to with education. It's all the teachers' fault!!! Don't agree? Just ask Weingarten or Mulgrew.

Chaz you're article has perfect timing. Just today it has been reported that the DOE is scrapping (finally) the awful ARIS program which we have been screaming now for several years that the program is a complete waste. NOW, we find out that the program is a complete sham as well.....JOel Klein aka former chancellor (or devil in disguise) has been billing the DOE for 10 MIllion $$ annually (working for Rupert Murdoch's company amplify) for the maintenance of this money sucking scam initiated by bloomberg and klein. Most computer scientists say any computer science major could have designed the same program for peanuts yet bloomberg paid 100 million back in 07 AND the DOE has been paying 10 million a year to maintain a program that nobody uses!! People like Klein are sham shady crooks who have taken away millions from our nyc schools and students. Next on the agenda SESIS. Bloomberg and klein's time spent here are slowly coming into focus and more and more we are seeing how evil of a money sucking tic they really were.

A - Another scam by bloomberg and klein
R - Reap as much money as possible from NYC
I - I I I I as bloomberg and klein believe its about IIIII
S - Shit heads can run a NYC schools system just look at bloomy and klein, walcott and don't forget ah ah black that would be k black

FARINA will never change anything. She was part of the Bloomberg/Klein regime and left when she got passed over.

She's a hack pushing the privatization agenda like Klein and Walcott before her.

Joel Klein should be under investigation for theft of services and intellectual property. His appointed cronies on the conflict of interest board found no fault with him stealing the DoE commissioned computer software he instituted. He then set up a contract with the DoE to lease the program back to them. It high time that Preet Bharara (NYS Attorney General) opens an investigation. Right now, the charter school juggernaut is being driven by Cuomo who is funding his campaigns with buckets of cash from the Charter School

Totally agree. Our "union" should be pushing for an investigation. If more charter schools get in, the union may be come even less relevant than it is now. Education has half transformed into a business, its time to stop Mr. Hyde (Bloomy).

Racketeering and absolute corruption....that would be the UFT and the DOE. DeBlasio will never get my vote again unless little Eva (Moskowitz) is running against him