Winners Of The 2014 Golden Turkey Award. 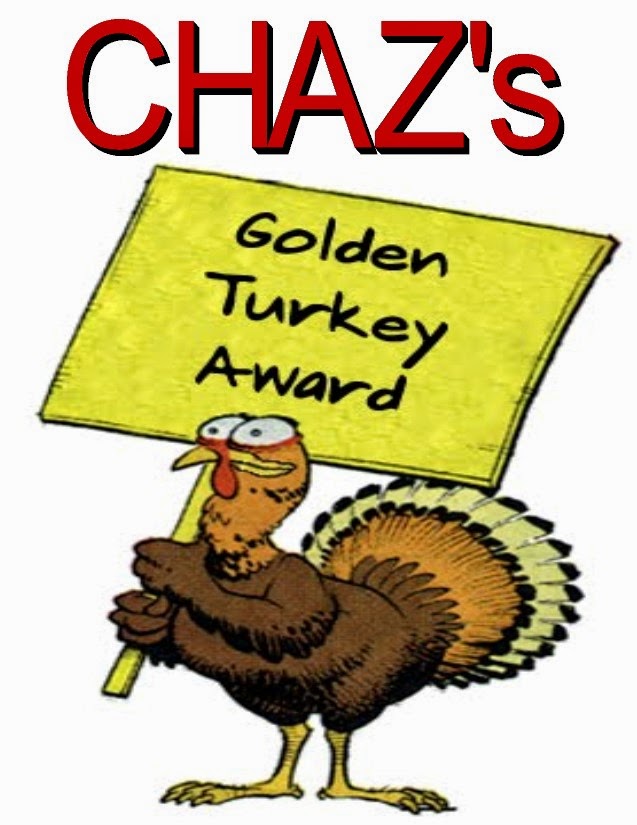 This year saw tremendous competition for the Golden Turkey Award.  There's  State Education commissioner John T. King, a past winner, who rolled out the Common Core and teacher evaluation requirements in a confusing and unworkable way that even Governor Andrew Cuomo backed away from it.  Then there's the Board of Regents that approved a charter school in Rochester proposed by a 22 year old who was home schooled and received dubious online degrees,  only to resign when it was exposed.  Then there's Campbell Brown, always a contender as well as the Governor. However, these two individuals won, head over heels, the Golden Turkey Award for 2014.   They are UFT President Michael (don't call me mike) Mulgrew and Chancellor Carmen Farina.

Michael Mulgrew gets the Golden Turkey Award for two disgraceful actions he has taken in 2014. the The first was a vastly inferior contract that has split his members into two groups, winners and the losers.  In addition, the ATRs were given second class citizenship and reduced "due process" rights.  Worse, was his defense of the Common Core standards where he claimed he will "punch anyone in the face" if they attack his Common Core which many of his members and many parents oppose.   Finally, under his leadership, the union has become increasingly disconnected with the members as his political philosophy is more important than what is best for the members as he required the union to co-sponsor and fund the divisive Al; Sharpton lead march in Staten Island.

Carmen Farina became Chancellor amid great hopes that she would change the political philosophy that resulted in antagonism between the DOE and the schools.  Instead, she has only made some minor changes and retained the Bloomberg 300 in policy making positions.  Who can forget during the worst snowstorm of the year she unwisely kept schools open and had her Cathie Black moment when she said this infamous statement.  "its a beautiful day" when it was snowing, and sleeting.  Moreover, she has failed to reduce class sizes, eliminate the useless and money sucking Children First Networks, or reduce the obscene amount of paperwork required by Tweed.  Finally, she has not improved the hostile classroom environment or "gotcha mentality" that exists at Tweed.  To say the least, Carmen Farina gas been a major disappointment.

Past winners of my golden turkey award are here.
Posted by Chaz at 9:18 AM

Something I didn't have time to share in my two minute speaking time at PEP the other night was the hand holding skipping of your two winners.

The golden turkey award should be given to all members who voted yes for this contract. Now as the city is plucking off our feathers and putting our necks on the chopping blocks, the turkeys are squaking. The turkeys outside the slaughter house are still waiting for their extra corn and are in a huff over it! Happy Thanksgiving!

How about a Turkey for atrnyc, the most embarrassing ed blog on the web. Is it okay to say that, or are all ATR efforts beyond criticism?