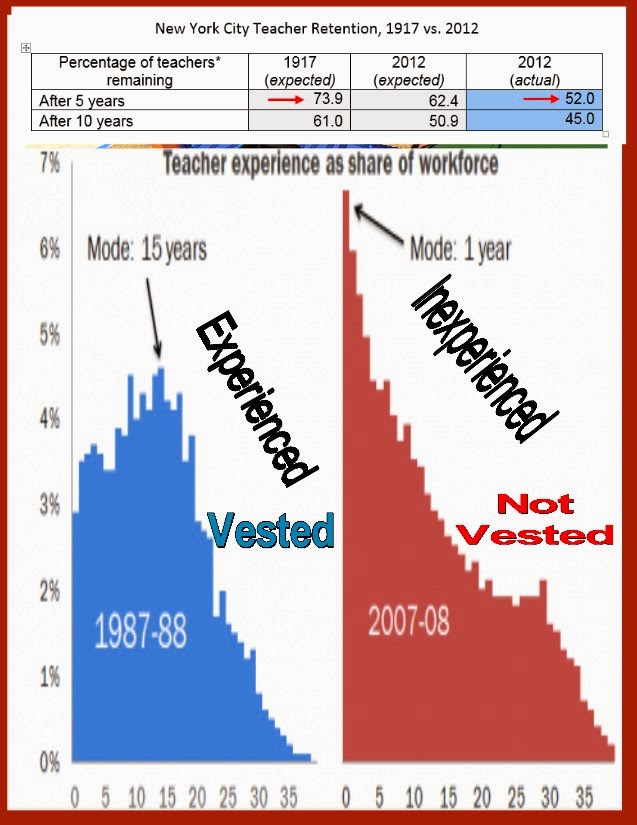 In 2008, the nation suffered an extremely deep recession, the worst since the great depression of 1929.  College graduates found few jobs awaiting them and many turned to the more stable but relatively low paying teaching profession as a stopgap.  Alternative programs such as "Teach For America" (TFA) and for laid off professionals there were the "Teaching Fellows" (TF) programs that funneled them into the teaching profession. Many school districts offered retirement incentives to encourage higher salaried teachers to retire.  The result was that school districts across the country saw a turnover of their teaching staff. However, the teacher turnover had a big downside, the constant teacher turnover hurt student outcomes.

The picture above shows how unstable the teaching profession became, starting in the mid 2000s.  In the 1980s, most teachers viewed teaching as a life-long profession and most teachers had fifteen years of experience, were vested, and looked forward to receiving a pension. However, by the 2000s that changed dramatically, the largest group of teachers only has one year in the profession, not vested, and the majority will not be teaching before they are even vested!  For New York City teachers, 55% of the teachers have left the profession before they actually make it to ten years in 2012 and in 2013, as the recession started to ease, the number of teachers leaving the profession are increasing.

The constant teacher turnover, with inexperienced teachers, many of them not fully certified and subject to a steep learning curve themselves, destabilizes the schools and hurt student academic achievement. Why the media and politicians chose to ignore this just shows that its not what's best for the students but what is best for their ideological allies that counts.
Posted by Chaz at 8:54 AM

Mikey Bloomberg crap head said he could have 80 kids in the classroom standing and it would not matter if the teacher is a good teacher. Also, bloomberg said they could all be standing!!! Hysterical. Lets put this midget in south bronx high school with a class of 80 kids and let him smell the shit

TENURE CASE FILED IN STATEN ISLAND - A NICE CONVENIENT WAY TO STAY AWAY FROM THE REST OF THE NYC BOROUGHS AND KEEP THIS SICK AGENDA A SECRET
People we are dealing with some slick low life people who are dangerous and deserve nothing but shit slung into their face. Notice they filed the tenure law suit in Staten Island of all places and use this campbell brown character as a spokeswoman - this is a group of sick demented individuals trying to ruin the livelihoods of hard working teachers. Go UFT law, you guys need to knock these slime balls out of the park

Notice how that chart resembles a cliff? That's us at the bottom- thrown over by friend and foe for the almighty dollar. No one gives a thought to the students and their education. Imagine if all schools were required to give (and have students pass) a random college entrance test as a requirement to graduate. If there wasn't widespread cheating by the schools, the grad rate would drop to about 30% (which is highly generous, more accurate number of what should be the graduate rate). Why the push to get rid of LIFO when experienced teachers aren't in front of a class? That alone should should throw the Staten Island case into the dump, where it belongs.


Hey! The argument is "tenure only provides due process" from assorted assholes. It has never been a "job for life".

Ah, due process. The DOE just fired an ATR for missing 2 interviews after going to 10 in a row. And how can the UFT allow for 2 different types of due process for members? Separate is not equal. Every school gets a chapter leader, but 1800 ATRs get 1 person. Even the DOE assigns 1 ATR supervisor for every 60 ATRs. Exactly why won't the UFT represent ATRs fairly? We pay the same dues and went through the same horses-hit as everyone else.