What The Union Forgot To Tell You About The ATR Agreement. 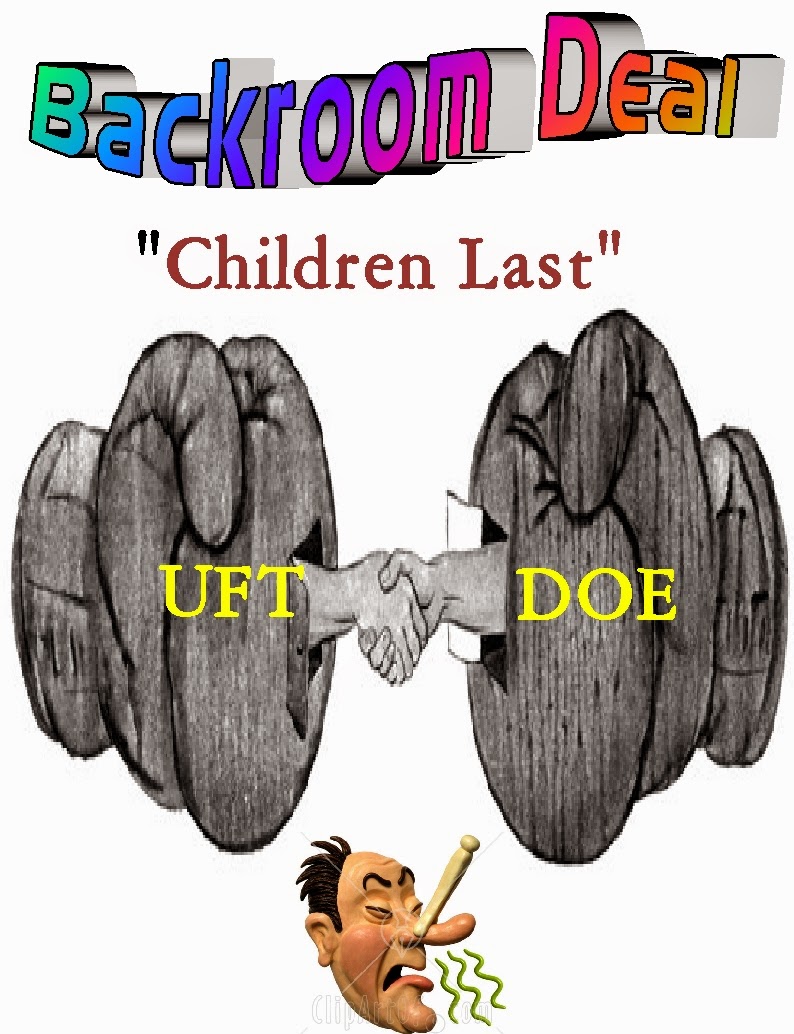 In the new contract the union allowed the DOE to impose special provisions on the ATRs, making them "second class citizens".  Moreover, the union has quietly allowed the DOE to keep the immoral "problem codes" attached to an ATR's file if they had a substantiated OSI or SCI investigation. even when an independent arbitrator finds the charges not to be true. Now it seems that the UFT and DOE have had some side agreements that circumvent the recently enacted ATR agreement.

Second, just like all other ATR agreements, the DOE is violating the conditions as the union has no power to enforce it.  I know of a case where a Bronx elementary school Principal is hiring an external candidate for a long-term leave replacement, in direct violation of the ATR Agreement.  How many other principals are violating the ATR Agreement?  I'm sure quite a few.

Finally, the UFT has failed to protect ATR rights from vindictive field supervisors.  How can rotating ATRs, who have no ownership or even knowledge of the students,. expect to meet the unreasonable requirements imposed by these field supervisors.  Most importantly, they demand "rigor" and "higher level thinking skills".  However, if you have no knowledge of the students, how can one determine their ability in one class session?   What is "rigor" anyway? Despite numerous complaints, the UFT has failed to stop this abusive practice by the field supervisors.

To summarize,  it appears the DOE has decided that violating or circumventing the contract terms of the ATR Agreement is part of their game and the UFT does nothing about it, like usual.

It's hard to put into words the anger, disgust and gut wrenching feeling of betrayal I have toward the union. A union I have supported for over 20 years. Now, at the end of my career, when I need some help, they are enabling those that would see senior staff stereotyped, marginalized, targeted and removed. I shake my head when I hear the UFTs heart felt cries for equality and fairness, for those in society who don't have it. Shouldn't the union straighten out their own cases of discrimination before they throw stones at society? Perhaps, it is a ploy to draw attention away from their own collusion and publicly appear unbiased, fair and tolerant. The UFT needs to be publicly exposed and reminded of their moral and legal obligations to their members.

Chaz,
There's much bigger news today buddy. The networks are officially done this coming July 1st. Took a bit longer but kudos to Fariña on this one. See link below.
http://nypost.com/2015/01/10/de-blasio-and-farina-plan-to-shift-power-from-principals-to-superintendents/

Oooops, sorry for above post as I worded it that today's news was bigger than ATR news. Didn't mean it like that. ATR issues are a terrible problem BUT today's news of waste networks is a pleasure to read.

Chaz,
Whatever happened to the ATR advisory committee? Any news on James's campaign for a functional chapter? It is not time to jack up the I AM AN ATR spirit of resistance against our union Judases like she who said she was "Gestapo" for ATR rights?

" I shake my head when I hear the UFTs heart felt cries for equality and fairness". Yes, it is a public ploy. Like all public and private institutions today, the UFT speaks from both sides of the mouth. They will promise to do one thing, yet do another (usually for self-serving purposes). Like politicians, Mulgrew and company are in this game for survival - the continuance of a nice salary and benefits without having to bust their asses the way we do.

The Unity caucus of the UFT are complicit in the fascism/privatizing that is enveloping public education!

M Mulgrew is not our friend!

Apparently there is no plans by the UFT to have an ATR committee since the leadership does not seem to care about hearing from us.

The end of the CFNs is a welcomed event, if true, but since its not been announced, I'll hold my comments.

Chaz. It's in today's NY Post. These CFN's are Lame Ducks till July 1st. It was announced indeed.

Some of those CFN Teacher Assigned A's-are in danger of becoming ATR's with the end of networks-although they could positions as part of new geographical networks/district teams that will be under the control of the superindendents.

The CFN was really the principal rubber room. Exhibit A is the principal of a large, struggling Queens school. She started out as the AP of this large struggling Queens school. Then she became principal of her own school, where she ran into lots of problems. She moved to CFN, where she worked to "mentor" a number of large struggling Queens schools. What she really did was work behind the scenes to close those schools and remove the principals so she could get back in, so to speak. She got her wish -- the schools didn't close but she returned to her old Queens school. And lo and behold, less than three years later the school is again on the official DOE shitlist. The popular, beloved AP of Organization (who used to stay till midnight sorting out the school's myriad problems) picked up and left the week before school was over last year after some reported problems with this "awesome" leader.

I have two questions and hope someone can help.
First, I am an ATR in an elementary school. I met my field supervisor in December. Last week, she did an informal observation. She stated she would be doing the formal observation this week. I don't know the actual day. Does anyone know if the ATR should know the actual day of the Formal Observation? (I always plan for any grade at this school. I have formal plans ready for any class she may visit “whenever”…)

Second, what happens if an ATR receives a U rating for the year? Do we need two years in a row of U ratings to be terminated? Please help. Thanks.

Consider this blog 1 for the contract and ATR's

We are well on our pace for taking the over

http://nypost.com/2015/01/11/doe-names-accused-racist-to-school-improvement-post/
SEE ABOVE LINK CHAZ
REALLY?????
What the hell is Fariña doing? She hired superintendents from failing schools who can't read/write English and now hires a lunatic to a big DOE position who was found to be a racist and her victim was awarded $110K in the court system as she was called a "nigger". What the hell is going on here? DeBlasio admin is OUT OF CONTROL!

Are you talking about Selenikas or Vittor? They have almost the same exact strategy…as does DeSanctis and Zhang and about 10 other principals--to--network--back to principals I can think of. You're right about the CFNs being the rubber room for these people- just that nobody told them so they think they got promoted upwards

Chaz, does the news about the dismantling of the networks possibly mean the end of the fair funding bullshit from bloomberg? Will school funding change and be taken out of the principals hands now - this would make so much sense as many principals are such poor keepers of their budgets - especially their budget for hiring and thats is why they opted for cheap labor instead of quality

Hi Chaz,
Last week a Substitute teacher was beaten severely by a student in Gorton HS in Yonkers. It was filmed. This morning the Aunt of the student was on News12 saying that it was justified. We are now considered to be subject to beatings by students for any perceived slight! This is an outrage for all teachers!

Bronx ATR, the reason for the fight (rather student attack on teacher) was because student wanted to go to bathroom and teacher declined request. So, of course the ill fated non educated parent says her son has to go to the bathroom so if he is denied this he can beat the teacher....This is new world order and we can all that our brilliant, gender confused politicians for creating this environment

This is symptomatic of today's blameless society. He whaled on that teacher because, according to the aunt, the teacher choked him and bit his finger...oh, and that the Easter Bunny really exists.

De Blasio/Fariña to Shift Power from Principals to Crossing Guards