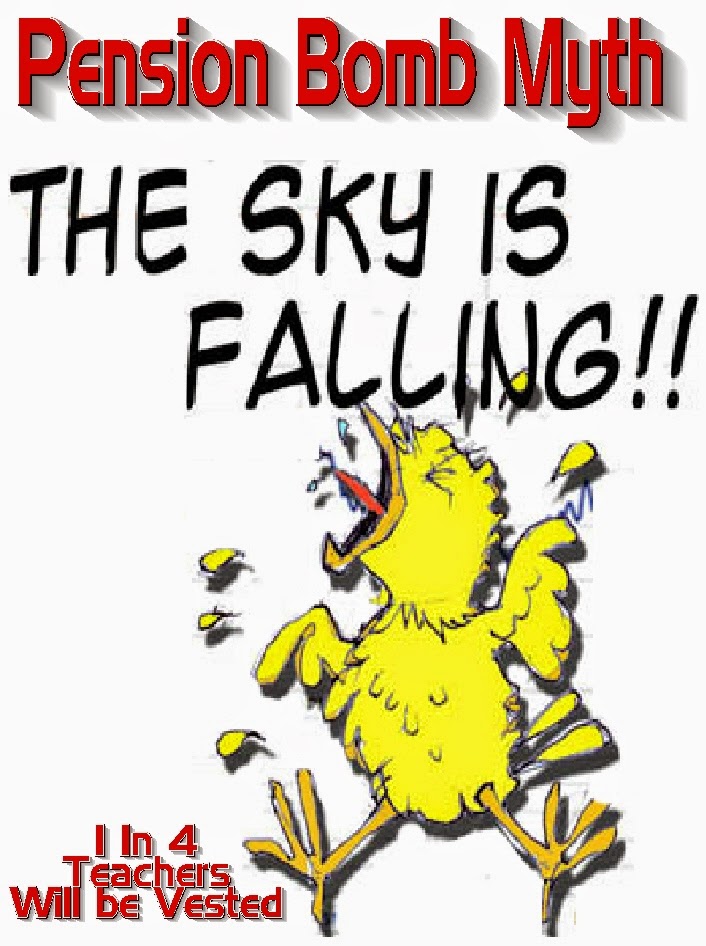 Lately the newspaper are increasingly complaining about the upcoming pension bomb that will bankrupt the City when the next recession comes around and if the current conditions stayed the same, they might have a point.  However,  they are falsely assuming that most of the teachers will last long enough to be vested.  The truth is as of 2013-14 school year, only 40.3% of all New York State teachers lasted long enough to be vested and receive any sort of pension.  This figure is still dominated by Tier 4 teachers who only need five years to be vested/  However as we look into the future, we find that New York State has imposed a new Tier V and Tier VI pension plans on all public employees who were hired as of January 1, 2010. Since both Tier V and Tier VI pension plans require employees to have ten years of service before they get vested, the 40.3% figure is bound to drop significantly in the next decade.

I strongly suspect if only large urban areas like New York City, Buffalo, and Rochester were broken down, the teachers who survive long enough to be vested will be much lower than the New York State average.  Moreover, as the economy continues to recover, many new teachers will probably leave the teaching profession for jobs with more money, respect, and less stress before they are vested  This is especially true in New York City where high paying office jobs are becoming increasingly available and will attract the "newbie teacher".  Finally, the more punitive teacher evaluation system will discourage teachers who have other options to leave the teaching profession, particularly in the struggling urban schools.

The bottom line is this, the "pension bomb" that the media and politicians loudly complain about, is really chicken little saying "the sky s falling".  Under our present pension system and the demonizing of the teaching profession, New York State will not experience any teacher "pension bomb".  In fact, its quite possible that with teachers not lasting long enough to be vested and eligible for a pension, the pension will be fully funded as three out of four new teachers will never be able to draw from it.

Chaz should be on CNN!

The most interesting stat that you stated was Hawaii's teacher 10 year pension vesting percent (26%). Collecting a teachers pension is a real long shot due to the high cost of living that drives too many teachers out of Hawaii. I think public school teacher pay range from $43,000 to $82,000. You can probably earn more money going into the tourism trade. There are also growing complaints with their new teacher evaluations, the teach to the test philosophy (just like many other states) and there are issues with their local colleges preparing teachers for the profession. You just have to wonder how such a beautiful and peaceful place-can be so ugly and stressful when it comes to teaching.

As a NYC teacher of many years, I can attest to the fact that the only thing that is keeping many veteran teachers in the classrooms is the fact that we have a decent pension to look forward to.

What a surprise! NYC has plenty of money for everything, except those things that will benefit education. Bill openly lied to Mike and he's still kissing his ass. Mike has become Farina's lap dog. Who the hell, in their right mind, would become a teacher?!

Anon 7:44 - People who assume the usual stereotypes about teaching will give it a shot...and I do mean shot...like a year or less. This is what a teaching "career" will become in the near future. The powers that be want this kind of turnaround anyway to keep from paying out pensions.

It's always been about the pensions , all these "reforms".

They want to declare a "crisis" so Wall Street can manage teachers retirement money then turn around and steal it all.

The less teacher collecting pensions the better for them.

Yep, I am vested and I am one of those holding out for the pension. I also agree that the newbie teachers are gonna jump ship asap. As an atr traveling to various schools, I listen to them relay feelings of unhappiness and dissatisfaction working for the NYC DOE.

Funny to hear new teachers talking about working 20 or 30 years!!

Anyone studying to be a teacher is either too stupid and doesn't read a newspaper or wants to play the game to advance their career.

Either way THEY'RE IDIOTS.

http://wdhaverstock.blogspot.com/
A must read for all of us. This blogger really gives us all some great insight to the incompetence, corruption, ignorance and hysterical system we all work in

...and by the way, how come we haven't received the little white contracts books we used to receive after every new contract was agreed to? What's to hide?