It Appears Cuomo's Education Budget Is Dead On Arrrival. 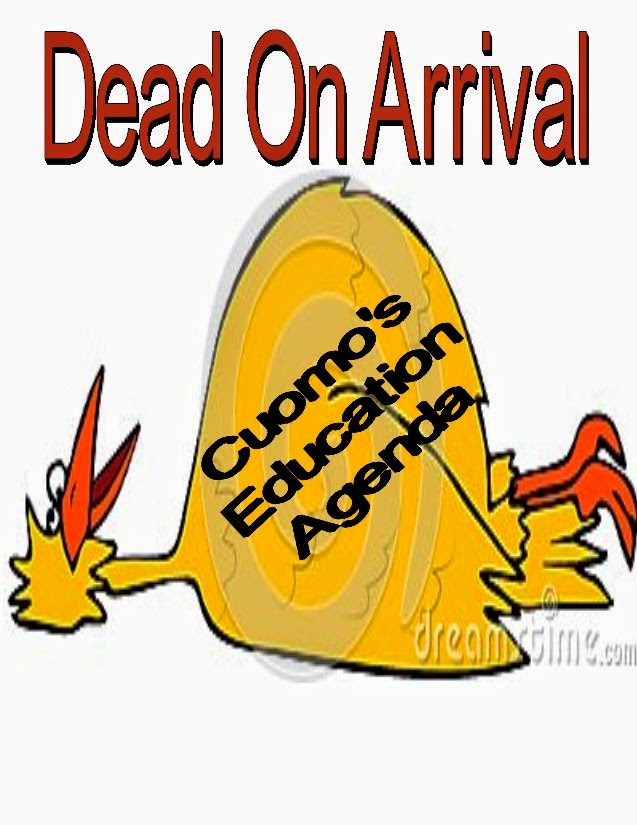 Senate Republican education chair, John Flanagan, told an audience of Long Island school district superintendents and board members yesterday that the Governor's proposed increase of $370 million dollars (1.7% increase) is inadequate.   That the State legislature will reject his proposal to link funding to his education agenda that includes a more draconian teacher evaluation system, increased charter schools, and taking over struggling public schools.

Senator Flanagan told the audience that the increase of $1.1 billion dollars (4.8% increase) is the floor and not the ceiling for increased State funding to the schools.  Moreover, he also stated that he will push for the State to restore 50% of the money taken by the Gap Elimination Adjustment  in next year's budget and that would release an additional $550 million dollars to the school districts.

If John Flanagan is a man of his word, it appears that the Governor's education agenda and budget is dead on arrival.
Posted by Chaz at 10:32 AM

Wow! This is the best news I have heard in a LONG time. I hope that these legislators follow through with their statements.

Skelos does the negotiating and hopefully he will be indicted too.

My understanding is that the governor can override the assembly's decision. So how is this a triumph?

Not true. He does have a line item veto but he can't override the State legislature.

Mr. Cuomo will going through his own 3020a hearing very soon. Karma, baby.

Jasmine Santiago another Bloomberg leadership academy principal found to have her own private gym up on the 4th floor of her school. She paid for the gym with students money. Many teachers have come out and said she is just another scum leadership academy drone of bloomberg who was despised by most of the staff, she was excessing senior teachers but finally a teacher rose to the occasion and reported this slime ball principal to the DOE - She has a nice bod though I have to admit...wonder what else was going on in her "private" gym

jasmine Santiago is the lowest
there is. A young heartless individual who emotionally abused most of the teachers who were at that school for many years.

http://nycpublicschoolparents.blogspot.com/2015/02/cuomo-needs-to-support-public-schools.html
READ THIS LISTING
The link will bring you to a listing of Cuomos charter school donors. The interesting thing is that most of his donors are from the "sucess"academy charters of moskowitch and company. Amazing how many "executives" they have on staff and amazing how they all donated to cuomo with 10 thousand, 20, 30 and even up to 55 thousand from moskowitch herself.
Notice how coke bottle Klein even donated 10 grand to cuomo. So, he really did sell his soul to the devil eh? Wow, cuomo gets 10s of thousands of dollars and all of a sudden he becomes the charter school guru!!! You fregen cant make this up people...What a piece of crap and it is so clEAR he was bought $$$$$$ OMG

As reported on page 2 of the Feb. 10, 2015 New York Post, N.Y. Gov. Andrew Cuomo’s latest attempt to shield himself from the same sort of scrutiny that recently brought down powerful Albany colleague Sheldon Silver is to resort to the Weiner defense.

Yet Governor Cuomo wants the performance of teachers to be based at least 50% on the performance of these students, many of whom acquire the designation “LTA” - long term absence. You can’t even lead the horse to the water if the horse is at home asleep … or worse, out roaming the wild range.
Yet this same Governor Cuomo, who thinks he should not be held responsible for the behavior of his legislators, thinks that teachers should be held at least 50% responsible for the irresponsible behavior of their students. Gov. Cuomo thinks that Obama shouldn’t be held accountable for the impulsive behavior of Anthony Weiner and prays that no one holds him accountable for the behavior of Sheldon Silver. This my friends is hypocrisy at its highest form

I don’t get it: If it is dead on arrival, why did he even choose it in the first place? Education of the USA is no joke. You just can’t say something out loud and then realize that you don’t even have money for this. Despite the fact that we are pretty much used to this, it is still not good. This Cuomo’s education is all over the internet now. So, what is he going to say now? Something like: I am sorry, things aren’t going to chance. Children will be as low-educated as they were ( I am not saying that each is using EssayServicesReview,I am saying that the majority of kids’ education is very low).