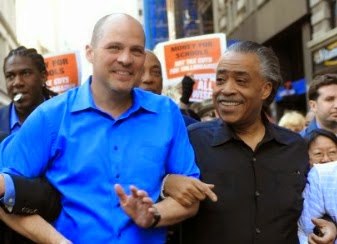 It is with little surprise that at last night's Executive Board meeting UFT President, Michael Mulgrew, defended the union's position not to take a stand against the basely flawed Common Core high-stakes testing.  That's right, our disconnected union leadership has defied the will of its members and supports the Common Core based State tests.  It seems to matter little that the vast majority of teachers oppose the "junk science" used to evaluate them and bring fear and loathing to the students. For its all about Michael Mulgrew's vision and not what's best for his members or the school children of the City.

Let's look at all the issues that Michael Mulgrew supports that's against the wishes of his teachers.

Support and funding for Al Sharpton's race baiting demonstrations at the expense of our fellow union members in the police department. Here.

Defending the high-stakes Common Core tests by claiming he will punch anyone in the face if they attack his Common Core.

Negotiated an inferior contract and threw the ATRs under the bus by making them second class citizens.

Refused to support Zepher Teachout by forcing the Working Family Party to support Cuomo for Governor.  How did that work out Mikey?

Hugged Carmen Farina and claimed there's a new tone at the DOE.  I guess we are all tone deaf since we don't hear it.

How can he declare victory when the reality is Governor Cuomo got almost all he asked for in the new budget.  Remember this?


Dear Teacher,
In a rebuke to the anti-public-school agenda of hedge-fund billionaires, the state Legislature tonight reached agreement on a new budget and a package of education proposals that will immediately increase aid to public schools, ensure that teacher evaluations do not hinge on state test scores and ensure local oversight of struggling schools.
Just two months ago, Gov. Cuomo proposed a series of education proposals that amounted to a declaration of war on public schools. His plan was to use the incredible leverage he holds in the state budget process to ram through his plan.  And now all of our hard work is paying dividends. The governor’s Draconian agenda has, in large part, been turned back. We want to thank the Assembly and the Senate for standing up for our schools and school communities.

Finally, he not only refused to support the "opt out" movement but defined the badly flawed high-stakes Common Core tests. by saying the following at the executive board meeting when it was brought up.
.
At last night’s Executive Board Regina Gori (New Action), Chapter Leader of the Brooklyn New School (with a 90% opt out rate) asked how the union was planning to help teachers of conscience who did not administer state tests. The response was sharp.

Yes, it seems that Michael Mulgrew is more interested in protecting his friend's political interests than his teachers and the public school students.  I really would like to know what drugs Michael Mulgrew is on since his views are warped and his perception does not reflect the reality of the situation.  In other words, I believe he is living in a fantasy world of his own making.

Maybe loosing some jobs would be just what teachers need to get the rank and file to realize that they NEED TO VOTE IN UFT ELECTIONS. Mulgrew is in place due to the fact that the majority of teachers either did not vote or in fact actually voted for him. If some teachers get laid off due to loosing federal funds then maybe the majority will realize just how serious our predicament is. (By the way, teachers are going to get canned anyway in two years due to the new evaluations. Maybe then the rank and file will wake up but who knows?)

Sorry to digress from topic, but found out today that my old school, Lehman HS and some other Bronx high schools were placed on the state's "out of time" list and everyone will have to reapply for their jobs (again) (same thing happened during the turnaround a couple of years ago where it was a bloodbath with mass excessing of mostly veteran teachers). That time we were saved by the union arbitration. This time I read in Chalkbeat that our union and the DOE have an agreement to allow the forced reinterviewing of teachers for their jobs. We know what is going to happen. What is not known is will the teachers become Atrs or will they be fired. Either way their jobs are gone. At Lehman only teachers with 13 years and up are left due to downsizing. I was excessed last June with 9 years and I am now an ATR too. Does anyone know what will happen to the staff who are not rehired?

Here's how my testing went today:

1) One student (with horrible anxiety) had to sit near the door. She ultimately had a meltdown and had to leave the room.
2) A puker (sadly, he hit the floor and not his test; I would have liked to send a vomit-soaked test back to Pearson).
3) A kid that arrived straight from JFK (from an extended spring break, of course) because her flight from Central America was delayed. I asked if she got any sleep on the plane and she said "A little". A couple of times she started to nod off during the test.

And this is what a teacher's career should hinge on.....

Our union should be on strike, i know Taylor law and all, but this is getting out of hand. 6 new schools will have all teachers reapply for their jobs. There is no contract for us anymore.

So much of what Mulgrew has done has been so awful that I almost forgot his dalliance with Sharpton during the bogus "Hands up Don't Shoot" protests.
Was the anyone in the free would who did NOT know siding with a notorious race-baiter over a false narrative was a bad idea?

Mulgrew doesn't give a crap!! His job is to look the other way as the bloodbath continues.
The bigger asses are the Loyalists at the DA who keep going along with Mulgrew.
Will they still support him when they are on the unemployment line?

My favorite piece of evidence re Mulgrew's fraudulent leadership, as if more evidence were needed, was his ardent call for a Truth Commission at the '13 Spring Education Conference.

“Let’s get out the facts. Let’s tell everybody the truth,” Mulgrew declared. “Let’s get on with it so we can make our city’s school system the best it can be.”

For weeks, I've been asking my Brooklyn DR and other UFT higher-ups if and/or when the Truth Commission will get its boots on.
But nobody will say.

Mulgrew and the Truth, it seems, go together like VAM and Science.

Today an ATR supervisor told a colleague of mine that Farinas'fixed idea is to have all ATR's assigned to one school for the year starting this September and that these assignments would be in license. This raises far more questions than can be addressed in a blog response, however, for starters,how can anyone know how many ATRs there are or will be in Sept.,adding in all the 'out of time school'new additions,what will be done with teachers whose license areas are virtually defunct by way of budget cuts-music,art,speech,business, etc,and if your're assigned to a building does that mean you are on the TO and no longer an ATR

To 1:54,
ATRs can be placed at the minimum of 1 school per semester contractually. The ATR agreement ends June 2016.

There is no way Mulgrew gets another term as UFT leader. Can anyone tell me how much longer we have with MUlgrew?? He really needs to get out of office. Enough is enough. How much longer can the members continue to bash their supposedly leader?? Its not a good situation for anyone. So, how much longer does mulgrew have to go. We need to get the word out so that members can make sure they vote this time and we elect a true leader who supports their members.

To those who think you can get Mulgrew/Unity out: You're living in a dream - or nightmare. There is absolutely no way to get Mulgrew out of power - especially when you add the New Action votes which go to him. So last time 2 out of the 3 slates were for Mulgrew -- and then there is the 23,000 retiree votes. There are less than 70,000 teachers in the classrooms. The 40,000 non classroom people are also often higher votes for Unity. And the nurses. And the home day care workers. So the people most affected - teachers - are pretty much a minority. The only thing an opposition could do is win some seats on the Exec Bd and even then they would be a minority. I'm inclined to urge a boycott of the entire farce.