The NYSED Is Running Scared With Threats If Parents "Opt Out" Their Children From The State Tests. 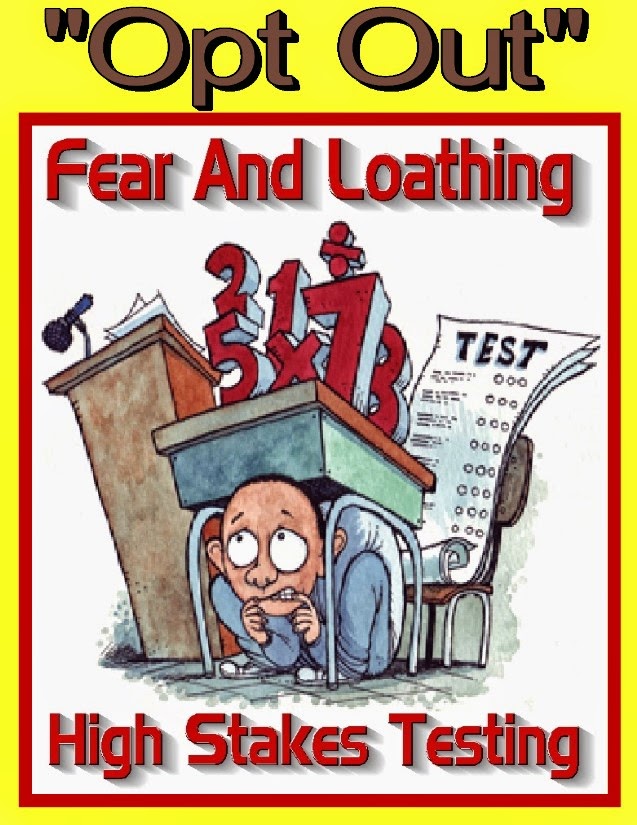 Reading the newspapers, the statements coming out of the Cuomo Administration , the NYSED, and Regents Chancellor Meryl Tisch, its obvious their running scared about the percentage of children who will "opt out" of the badly flawed high-stakes tests next week.

First the NYSED has informed rebellious school districts and boards that they may suffer financial consequences if they encourage their parents to "opt out" of the State tests.  Moreover, they threatened to fire school board members if they encourage the "opt out" movement. The letter sent to the President of the Kenmore-Tonawanda School Board is Here.

Second, Regents Chancellor Meryl Tisch told the media that parents are doing a disservice to their children by "opting out" and harm their educational ability.  Further, she claimed that if enough children did not take the test, it could result in federal sanctions and reduced funding, Here.

Third, the Governor's administration in the form of the Lieutenant Governor, Kathy Huchi claimed that parents are doing a disservice to their children by "opting out".

Finally, in today's Newsday, three education deformer groups who support the Governor's agenda  wrote a piece supporting the badly flawed high-stakes tests and criticized the "opt out" movement. Here.  Also the Buffalo News had an editorial that also slammed the "opt our" movement.

Why are they running scared?   Here's why!  That's right, in one school district an astounding 56% of the students are "opting out"!  Many schools in New York City will experience significant "opt out" rates and in some elementary schools the majority of students will "opt out".


This is only the beginning of the push back on the punitive education agenda that punishes teachers and ends up hurting the students of the State.
Posted by Chaz at 5:41 PM

Let's keep this going. I know full well here on the North Shore of Long Island, there has been a dramatic push for opting our students out; the rates should be significantly higher this year. Wish the UFT can get on this bandwagon already Chaz!

Google Ms. Sheri Lederman of Great Neck Schools, NY. She received an ineffective because all her students were A's, and she could not move them forward!

You can't make this up!