You Get What You Pay For. 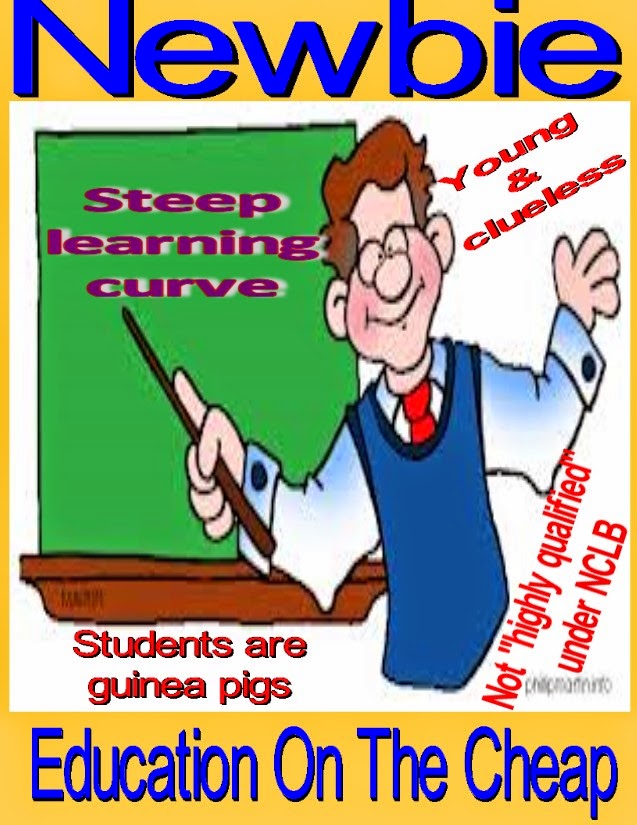 The prime evidence of the DOE's "children last" policy is their continuation of the "fair student funding" that penalizes schools for hiring highly experienced teachers.  Last year due to retirements and the end of a hiring freeze that was always a joke to savvy principals who knew how to circumvent the restrictions or were secretly given exemptions, 6,000 vacancies had to be filled.  However, few of those vacancies went to experienced and tenured teachers, most hires were "newbies" with no track record and principals closed their collective eyes to the potential damage some of these teachers could and did to their students.  This situation was especially true in schools with "Leadership Academy Principals", many with little classroom experience and were afraid that a highly experienced teacher would question the dubious decisions by these administrators.  The result was that combined with the "fair student funding", encouraged principals to hire the "cheapest and not the best" teachers for their students.

A prime example of the DOE's short-sighted approach was the travesty that transpired at Hillside Arts And Letters Academy, one of the small schools that replaced Jamaica High School.  The Leadership Academy Principal who was the founding Principal of the school needed to hire an Earth Science teacher in their second year.  After going through a phoney interview process, he hired a "newbie teacher" who apparently had poor pedagogy, according to an ATR who was placed at the school.  This deficiency showed up in the school's snapshot where Science did poorly compared to the other tested subjects.

Worse, it turned out that this teacher was caught trying to arrange a meeting with a 14 year old girl who ended up to be a NYPD Detective and was arrested.  He subsequently pleaded guilty and gave up his teaching license and registered as a sex offender.  When the Earth Science teacher was removed in March of 2014 after being arrested, the Principal instead of bringing in one of the 5 excessed Earth Science teachers to finish the course, instead had a Living Environment teacher complete the year.  As a result, the Earth Science Regents passing percentage dropped drastically over an already poor outcome from the year before. In other words, the students suffered for the unwise decision making by the Principal both in his hiring and replacing the teacher.

I'm sure there are hundreds of similar horror stories in the NYCDOE's 'education on the cheap" policy.  Therefore when the Chancellor claims that she only wants the best for the students of NYC, just take a look at her actions and you see its all about the DOE's budget priorities and not what's best for the children.
Posted by Chaz at 2:09 PM

In the Bronx its much of the same thing Chaz. Newbie teachers walking around like deer in the headlights...This inferior work force would not be tolerated in the suburbs including westchester and long island. So many students are not being trained and the classrooms have no discipline what so ever - In my life time I have never seen such hypocrisy in that the DOE is truly a dysfunctional organization when they claim "students first" when indeed they know dam well that the kids are not the priority its the money. It is so blatantly obvious that more experienced teachers are shunned simply because of $$$$$ money at the kids expense!!!1 This is the sad truth of NYC schools.

Dwarka from W.C. Bryant re getting the worse results ever, she keeps pushing out and discriminating experienced staff. She keeps targeting veteran math teachers, and her results keep going down. She has destroyed W.C. Bryant High School but the Chancellor still protects her.

Fair student funding and children first are propaganda terms meant to deceive the masses. There's a sucker born every minute. That's what the super rich count on. These are the tactics of the super rich. Just look up the Robin Hood Foundation for example. It was created and funded by hedge fund managers yet their mission statement says that they want to help the poor inner city kids get a better education. Same tactic. You're being directed to look to your left while the stealing goes on to the right. Most people never know what hit them. It's a shell game.

Why is the DOE of NYC letting these Leadership Principals engage in age discrimination tactics?

peggysally said...
This comment has been removed by the author.
4:39 PM

Because there's no punishment. Everyday we teach the kids to follow the rules. But the super rich and their government partners don't follow any rules, neither are they punished for violating the law. There is no place to complain. You have to file a lawsuit to get help and even then it's not guaranteed because the judges are in on it too. We live in a lawless society with a rich ruling class. This us why they started the Occupy Wallstreet Group. They are trying fight back against the ruling class. They are taking everything. They are taking all the land too.

bloomberg trained so called principals at the principals academy better known as "the leadership academy" excuse me while I take a gasp of air......
bloomberg and klein trained these neophyte bozos to go into the schools and act like a mad dog on the loose. Forget about the kids and their education. bloomberg is such a devilish gool in that this man truly hates humanity. he plays it off like he is a man for humanity but this lizard looking midget of a man wanted to accomplish just this....create a school system that pits people against one another..this practice is performed at bloomberg llp the company this jerk owns....ask any employee currently there or who has worked their in the past how much bloomberg hates humanity and the "masses"...and so what we are left with is the remnants of leadership academy drones who come from all areas of business....these were people who were displaced during the 2008 recession and forced out of their jobs....so now they came over to the education field and were brainwashed to believe they can become principal!!!!!!!! even though they never worked in a school or for that never been in a classroom....so today the few so called principals that remain are still going after experienced teachers because they earn $80,000 per year and in mikey bllombergs world - and fat christy as well that is just too much money.

The DOE closed Columbus HS and opened 2 small shit schools in its place. Bronxdale high school and Language and Innovation high school. Both are receiving their first grad rates as they complete their 4th year this June. Unfortunately for them, they will not be able to hide anymore as the "data" will be clear. The grad rates will be putrid for both fake schools. Pathetic to close Columbus and open 2 farse schools like these. Disgusting and ridiculous. Both schools will close or combine with bigger schools within 3 years. Can never last like this.