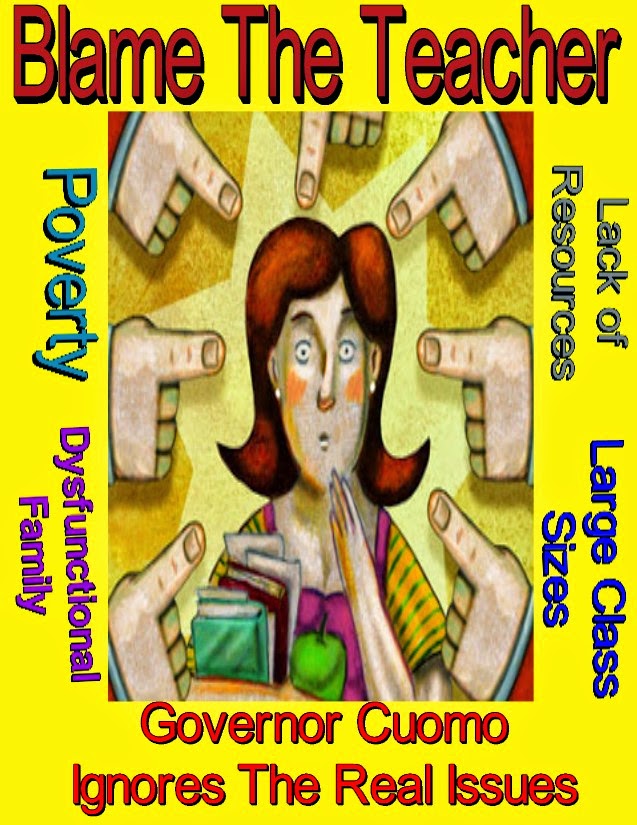 Its very interesting how Governor Cuomo has blamed teachers for his punitive education agenda that will hasten teacher retirements, bring about a teacher shortage, and hurt struggling schools in districts in high poverty communities who cannot attract or retain quality teachers due to the fear of the new teacher evaluation system.  Some bloggers like DOENUTS believe that the Governor overreached and when the general public realize that the new requirements not only hurt teacher quality but resulted in disappointing student academic outcomes, the blowback on the Governor will be intense.  His reputation and poll numbers will suffer and his Presidential ambition will be a pipe dream. While I agree with that assessment, the problem is until the Governor's education agenda blows up in his face, the collateral damage done to the teaching profession and to the students will be devastating.

The Governor claimed that he could not understand how only 1% of the teachers in the State can be considered "ineffective" while only 30% of the students met the State testing standards.  This flawed comparison placed the blame on the student academic outcomes squarely on the teachers, despite studies that showed that the teacher has little effect on the student's academic ability.  Its like a person who has stage three or four cancer who finally shows up for treatment and the doctor who is newly assigned to the patent is rated on how many of these late stage cancer patients he or she can save.

The Governor does what all education deformers do, that is to ignore the effects of poverty, family, inequality, and community, that contributes to over 80% of a student's academic development. Add that to the lack of accountability by politicians who starve the schools of resources, and cause large class sizes and you have a recipe for poor academic outcomes.  Better to blame the teachers than to tackle the social-economic factors that are primarily responsible for a student's academic ability.  That and the failure of politicians to be held accountable for approving badly flawed high-stakes tests, and using "junk Science" in calculating the VAM that have resulted in the poor student outcomes.

In the Governor's blame game, its easier to blame the teachers than to admit that the problem lies beyond a school's ability to control.

A few years ago, one of my students was killed in a car accident. Testing was a couple of days later. Any number of the test booklets had "RIP" written inside. For many of the kids, it was their first experience with losing somebody close to them.

So, by Cuomo's reasoning, I should receive an ineffective rating because the kids were too upset to focus on the test. That's logical.

Cuomo Jr. is such a BITCH.

You're no Mario, bitch!

The only way this system will change is if parents are held accountable. Parents who do not send their students to school or show a pattern of excessive lateness should be jailed. Acs does nothing.

The problem is that most inner city parents do not make their child's education a priority. This has to change in order for children to start acheiving gains.

There are good and bad teachers, administrators, superattendants, etc. but the one fact that has always determined a succesful student is an active parent.

Until parents are held accountable the rest will not matter

All elementary school kids have to be able to read and analyze Charles Dickens, Shakespeare, etc. regardless of their aptitude, whether their parents have abandoned them are in jail or on drugs, whether they were put in front of a television since they were born and started school with a forty-word vocabulary, lack of role models, starting out in life as crack babies, born to alcoholics, and so many other deficiencies found in households across the spectrum. This all can be ignored because it doesn't help to progress the hidden agenda: to get rid of quality, experienced, dedicated and hard-working teachers.

Here is a great article about the illegal attempts to privatize public education by the billionaire boys club.I hope you'll take the time to read it. It's very well-written. Knowledge is Power

His (teacher) mother must hate the sight of his face.