Is This Another Regents Cheating Scandal Involving A School Under Superintendent Amiee Horowitz? 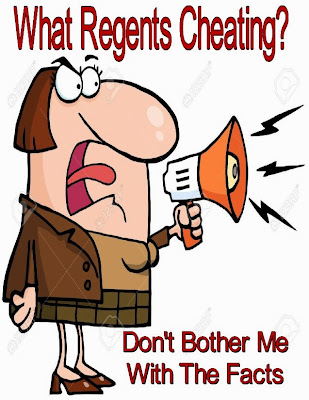 In the New York Post today an article by Susan Edelman has exposed a potential Regents cheating scandal that involved Automotive High School.  According to the article students who failed the Living Environment and Algebra Regents in January, were allowed to appeal their grades and 5 of the 9 students were found to have passed one or the other Regents.  While I'm sure that Regents grade appeals are very common throughout the City, the question is who where the educators that re-graded the Regents test papers?

My understanding is that any appeal of a Regents grade is done by outside educators who have no affiliation with the school or subject to pressure from the District Superintendent.  However, according to the New York Post article an insider claimed the re-grading was done by a select group of teachers at Automotive High School appointed by the embattled Principal Caterina Lafergola.  The article included the following:

Automotive insiders said Lafergola instructed several teachers to go into a room and re-score the January exams in March.

Of course, the DOE disputed the claim and said that no Automotive High School teachers were involved in the re-grading.  Maybe the DOE should supply the names of the re-graders and their school affiliation to put the accusation to rest.  However, the DOE has not done so further fueling speculation of another Regents cheating scandal.

While there is no proof that Superintendent Amiee Horowitz condones Regents cheating but if these new charges prove to be true, her failure again to take appropriate action against school administrators who have been implicated in the Regents cheating is very troubling and makes me wonder if she is competent to be a Superintendent.  Then again under the disappointing Chancellor, Carmen Farina. its cronyism over competence, when selecting who should be a Superintendent under her administration.
Posted by Chaz at 10:43 AM

Why can't New York be like Atlanta and treat cheating like a crime? Because nobody in power, especially Farina, dares poke this hornets nest, knowing that too many people at the top would be stung. What the city needs is a Knapp Commission to investigate (a) the culture of administrator/teacher cheating and (b) the corruption of government agencies that cover up grade fixing.

Exhibit # 1: Official Misconduct by Special Commissioner of Investigation Richard Condon--This Bloomberg holdover was so biased against OSI's substantiated report of Regents tampering at Cobble Hill that he refused to audit the disputed exams for telltale erasures despite solid gold evidence of hanky-panky like a NYSED letter stating that the scores in the 60s went "beyond any dispersion, magnitude or directionality that is likely to be attributable to chance." Specifically, 59 students passed U.S. History between 65-69, but only 1 failed between 60-64.

without examining the best evidence of cheating--the exam booklets themselves--

The facade is crumbling. This has been going on for years almost everywhere. The Post does not like Farina or Deblasio; none of this was reported on when Bloomberg was mayor. Good old Miser Murdoch will report about this now, because he and Bloomberg want her out to make way for Moskowitch's charter schools. No schools were taking cell phones during the regents. The kids just went to the restrooms and looked up the answers. No one was going into the stalls with them, obviously. DeBlasio is a complete imbecile to allow cell phones in schools.

Cheating is a prerequisite for boosting graduation rates.

This same thing was dove at Richmond Hill!

How long will Farina last? A scapegoat is needed and she will be it. I actually think Walcott was better. At least we knew what we were dealing with. I'm just wondering who the mayor will bring in next?

Dear Chaz,
Since we're talking about bogus superintendents, here's some inside info. On the last day of school, Friday, Bronx newly appointed superintendent Maria Lopez was relieved of her duties. She was given a lower ridiculous made up title. She is no longer a superintendent in Da Bronx. Another mistake by Carmen.

I met Lopez at an event in Bx. She couldn't speak English that well and there was a big joke that her resumè contained multiple errors. Everyone was talking about it. She'll make big money doing a pretend, unnecessary job. Kudos to her!

Maria Lopez was the best superintendent District 11 ever had or ever will have. The best of the best! She had an uncanny sixth sense about her, very street smart, very diplomatic, great problem solver. A true leader.