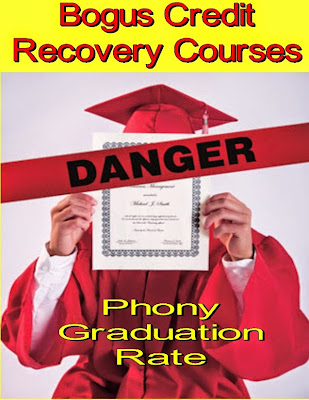 After a year and a half OSI investigation of grade fixing and phony credit recovery courses at John Dewey High School in Brooklyn.  The investigation is still ongoing which is very puzzling to me.  In fact, according to the Daily News, Chancellor Carmen Farina claims that the OSI investigation has failed to substantiate many of the allegations logged against Principal Kathleen Elvin and her administration but that the investigation is still ongoing.  I guess the ten teachers who cooperated in the OSI investigation exposing the grade fixing and phony credit recovery is not proof enough that academic fraud is being perpetrated to artificially increase the school's graduation rate at the expense of the student's education.

It seems that the school's "easy pass" system is geared to give struggling seniors essentially free credits so to graduate them despite being academically unprepared.  Juan Gonzalez of the Daily News exposed this in his article back in April and showed massive fraud when it came to awarding credits.  I also summarized the problems at John Dewey High School in my May post as well.  Since then the local CBS affiliate has reported that the DOE has decided to "circle the wagons" and protect the school's administration while allowing their highly questionable credit recovery system called "easy pass" by critics to artificially inflate the graduation rate. In fact, the local CBS affiliate has claimed that the Chancellor refuses to talk about why she has failed to remove the school's Principal and has now employed a personal bodyguard to shoo away their reporters who wanted her to explain her decision to leave the school administration in place.

It seems that the Principal Kathleen Elvin is very vindictive and according to the New York Post retaliated against staff by giving half the school's teachers failing grades.  Of the 101 teachers on staff, 16 were rated "ineffective" and 35 were rated "developing".  By contrast, only 8% of the teachers citywide were rated "ineffective or developing".  Interestingly the school was rated "effective" on the State tests but the terrible observation reports lowered the teacher evaluation grades.  One teacher was quoted that "She has a personal vendetta against the teachers and is using the observations as a weapon against the teachers to force them to leave or retire".  Interestingly, in the school snapshot a majority of teachers do not believe that the Principal is an effective manager and the union grievance director called the poor rating a "red flag".

This is just another case of a bad Principal being protected by the DOE and a Chancellor that can't see the forest for the trees as the OSI investigation drags on with no report of the alleged educational fraud at John Dewey High School in Brooklyn..
Posted by Chaz at 4:09 PM

Perhaps she will be replaced and become an ATR Chancellor! Any newbie could do a better job at a tenth of the salary.

This shit is going on all over. At Bryant, Dwarka has her puppets oversee a whole class of kids taking different subjects and googling the answers on their phones. The teachers don't even know what is going on cause they are too busy texting themselves when they are supposed to be working. To see the trash that got diplomas today would make a person sick. At least 50 were at least 2 years behind at the beginning of the year and magically became scholars overnight. Dwarka truly is a warlock with great powers. Bryant was once a great school and has now become a cesspool filled with vile, criminal students, incompetent administrators and stepford wives for a faculty. Congratulations Bloomberg, Klein, Farina and Mulgrew - you scumbags won on this one.

All HSs do this. Suprised no one ever questioned how kids with 70 IQs suddenly pass regents exams like they do in my former school. I watched an AP do credit recovery for a student and saw a teacher bring her entire class to a lab to do recovery while getting seat time for subject she taught.

The Chancellor should work under one of those Abusive Principals, so she can get a sense of reality. She can be targeted because she is expensive, she can call an investigator who does investigate anything and actually exonerates the Principal, she can call the UFT who thinks that a 3020A is an opportunity, or that is ok if the Principal forces APs to go after teachers. The Chancellor is either in a bubble, or she is giving all the Abusive Principals like Dwarka and others a free pass to continue to destroy careers and retaliate against staff members

Under Dwarka everybody that is part of the corruption scheme, that participated under fraudulent credit recovery programs is rewarded with per session and immunity from adverse ratings.. But if you report wrong doing, harassment, discrimination, hazardous conditions or you have standards you will be humiliated, harassed and rated ineffective. So if you do not have students and do not care about the students, you should work there because she will love you

I recently had the pleasure of telling the Chancellor to her face that she was the Beverly Hall of the DOE, referring to her dirty hands in the city's sordid history of Regents cheating when she was Region 8 Superintendent and Deputy Chancellor in the Klein regime and to her current corruption in the malodorous John Dewey grade-fixing fiasco.

Not only has Farina failed to act on smoking gun evidence delivered to her cops at OSI proving that Principal Kathleen Elvin masterminded a vast criminal scheme to falsify grades, she has stonewalled the media just like Klein and Bloomberg after the Wall Street Journal exposed the 65 bulge in the city's Regents scores in 2011. (“Students’ Regents Test Scores Bulge at 65,” February 2). But in the wake of the Atlanta scandal, a replay of the DOE's Regents scrubbing sprees, you would you think that the Chancellor would be out in front of the Dewey debacle. But that's not her m.o., never was.

Last March 23, when the Dewey story was leaked, Farina clumsily dodged Channel 2's Marcia Kramer, saying merely that the DOE was investigating. Her office quickly issued a robotic release pledging cooperation and noting, none too credibly, that “any findings of wrongdoing are taken very seriously and those responsible held swiftly accountable.”

Really? When Farina was running Region 8 in Brooklyn in 2002-2004, she became mixed up in a Regent cheating mess at the Cobble Hill School of American Studies. Although her office was fully aware of the alleged lawbreaking, neither she nor her Local Instructional Superintendent Kathy Pelles bothered to alert SCI as mandated by Mayoral Executive Order 16 and SCI's own Reporting Obligations. When interrogated by OSI, which headed the inquiry, she developed sudden onset amnesia. She could not remember anything about the case, and therefore it was hard to nail her on cover-up. But what about Pelles, her rogue LIS, who claimed to have kept everybody, including her boss, in the dark? How seriously did Farina, then elevated to Deputy Chancellor, take Pelles's admitted wrongdoing and how swiftly did she hold Pelles accountable? Let's go to OSI's report:

Of course, as Deputy Chancellor for Teaching and Learning, Farina was every administrators superior. I believe that she whitewashed Pelles's sleazy cover-up because Pelles provided her with an alibi. Simply put: what Farina did not know, thanks to her LIS,she could not be accused of covering up.

If Farina's past is prologue, then Principal Elvin is home free.

Phony grades are the least of our problems. This whole system doesn't care about people( kids or us) it cares about statistics. Everything done is done for a number just like a business. Bloomberg must sleep well at night.

These Abusive Leadership School Principals are targeting teachers that have integrity, yet the vicious DOE lawyers together with the NYSUT lawyers and the UFT would make sure you are pushed out the system.