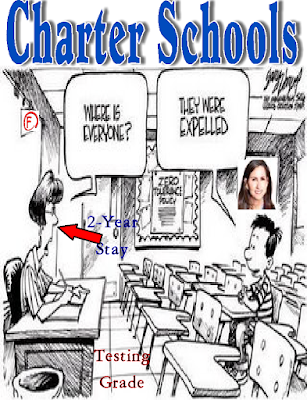 Last week was not a good week for Eva Moscowitz and her Harlem Success Academy Schools.  First. there was the PBS story about the student expulsions and then the New York Times wrote a damming article on the Success Academy discipline policy that pushes out misbehaving and academically struggling students.  In fact, one of her schools, the Fort Greene Success Academy had a "got to go" list of 16 students the school wanted to push out.  Was the Principal fired for having such a list?  Of course not since this is the standard operating procedure for the Success Academy Network.  The only difference was the Fort Greene Principal was stupid enough to write the "got to go" list and gave it to staff.

If that wasn't bad enough, Eva Moscowitz has refused to allow for the New York City vetting process for opening a pre-k program.  Of the 277 applications, including other charter operators, only the Success Academy Network has refused to be vetted and has threatened to file a lawsuit claiming they are exempt from New York City requirements and wants public money while not being held accountable.

Obviously, Eva Moscowitz thinks she still has Mayor Bloomberg and Chancellor Joel Klein in charge who allowed her to ignore DOE and NYC regulations, requirements, and rules.and open up new schools with public funding but no oversight and do as she pleased.  Even when it meant pushing out traditional public schools or forcing special education services to be given in hallways or book rooms.  Yes, she has Governor Andrew Cuomo on her side but as his poll numbers slide and his disastrous and punitive education policy is proving to be a rock tied to a drowning man, he has decided to downplay his support of her.  Therefore, the newly empowered Bill de Blasio has flexed his muscles and put the screws to Eva Moscowitz and has refused to allow her space in existing public schools.

The miracle at Eva Moscowitz's Success Academy of high test scores hides the very dark side of these scores, that is the constant test prep, the pushing out of "high need students" and the increasingly smaller class sizes as the network refuses to backfill leaving students.  The lack of  scrutiny by t5he Bloomberg Administration is a thing of the past and its about time that the Success Charter School Network be subject to the same oversight that all New York City schools should be whether they are public or charter.
Posted by Chaz at 4:58 PM

News flash for Eva: If you claim you run a "public charter school" that means ya' gotta play by the rules. And sorry to bust your bubble but rules are not just for the little people.

Eva is an extension of Bloomberg, as are all of the leadership academy principals left in place, as are all the lawyers and the many staff personnel. If he really wanted to do something he should clean house and then take her to court for everything. All Bloomberg's people are telling her everything he's planning and doing. DeBlasio needs some political savvy, fast. I'd get rid of Farina also, she thinks like Klien.

News Flash for all of us- there are 430 public high schools and 70 charter high schools. Very quietly these charter people are now running almost 15% of high schools in NYC.

I'm waiting for the day when we can rid ourselves from this moskowitch jerk who is so blatantly brazen it is quite astonishing to witness. This woman has the balls of bloomberg thinking that they are above the rest of the human race - My only hope now is that somehow the press will begin to torch this wicked witch who is oh so self serving with her inflated salary of $500K. When the microscope is focused one can tell the real story of success and all other charter schools on how they use smoke and mirrors to create a bull shit environment and present it to the public like some sort of utopia school system. This old witch really needs to get out of nyc education go get her press people you will sell lots of papers when you expose the witch.

News Flash- Any parent of a district 75 student can now, on a whim, simply write a note, on a napkin, McDonalald's receipt, with a crayon,with their press-on nails, and Voila! Their child will immediately be admitted to a regular Ed program-no questions asked, least of all the opinions of the teachers at the new school that have to deal. Don't forget to differentiate!