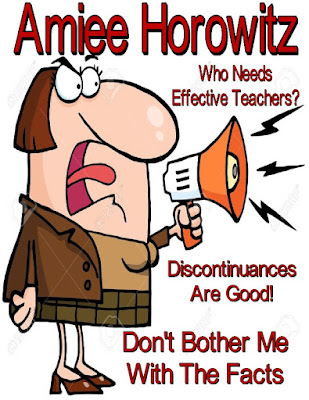 Here will go again!  Another scandal has been exposed under renewal Superintendent Amiee Horowitz as she allowed a removed Principal, due to her alleged sexual misconduct with school personnel and a child's parent. to teach English at the nearly all male Automotive High School.  Yes, the very same Automotive High School that the DOE falsely promised to hire a top quality teaching staff only to fill the vacant positions with "newbie teachers" with no classroom experience and it seems a teacher who should not have any contact with students due to her alleged sexual misconduct.

The story starts with the then Leadership Academy Principal of Robert Wagner High School,  Annie Schmutz Selfullah being removed from her position as various allegations of sexual misconduct surfaced between her and a student's parent as well as other people inside the school. While you can say that they are all adults except that sex in the school is considered extreme misconduct and should have resulted in her firing, especially in the DOE's alleged zero tolerance policy that is not enforced for administrators. Moreover, her affair with a student's parent is unseemly.  The DOE removed the Principal but did not file 3020-a charges and said that she will never be put in a position that exposes her to children.  Yeah, right?

Now it appears the DOE quietly allowed Superintendent Amiee Horowitz and the embittered Principal of Automotive High School to quietly hire the ex-Principal as an English teacher.  Unfortunately, for the troubled school the students checked on her and found the sex scandal.   Ms. Selfullah left the classroom and ran out of the building when confronted with her past by her students.  The DOE claimed it was a mistake that Ms. Selfullah was assigned as a teacher.  However, one must think that a competent Superintendent and Principal would have done some checking and realized that Ms. Selfullah should not be with students.  Therefore, the blame lies with the renewal Superintendent Amiee Horowitz and the Principal of Automotive High School, Lafergola who did not do their "due diligence" or just ignored Ms, Selfullah's alleged sexual misconduct.  Either way, they are both culpable for the disgraceful action of putting, as the New York Post states "a cougar in a den of cubs".

Just another poor decision made by renewal Superintendent  Amiee Horowitz but then we all have learned that seems to be the a recurring pattern in her inept administration.
Posted by Chaz at 1:09 PM

Where is Campbell Brown when we need her?

Simply disgusting.
Hey Chaz. Do you know why the New Visions network is so powerful? They were my schools network for years. When the DOE under Farina wiped out all the networks, why did she allow a few to hang on? New Visions is one of these hangers.
If you google their Board of Directors, do you know who some names are that stick out?
Randi Weingarten
Michael Mulgrew
How can these two be on New Visions' Board? How?

Didn't Mulgrew do the same thing as a teacher and now he's the head of the UFT? Let those without blame cast the first stone. Seems like she's paid enough for her indiscretions. Being sent to Automotive High seems like cruel and unusual punishment.

Leaving one's charges unattended is unacceptable. Unfortunately, the Leadership Academy promoted the "rules-don't-apply-to-me," and erratic behavior that this person demonstrates.

Many administrators exhibited the same behavior and went on to much higher office; all of them men however. One of them was a friend of mine. He used to bang his secretary on his desk every morning at 6:30 AM and then a guidance counselor in his private restroom at noon. He was a great principal!

Awwww cmon, drop the school & the name. Let's have a party.

Sorry dude, the guy's a respected friend. Look around, it's going on everywhere.

Chaz, in all likelihood, NYSED has been made aware of this.

However, people can file Part 83 complaints:

live from the bronx yes again the school is a zoo with kids running the asylum and all the newbie teachers looking like deer in the headlight. meanwhile, all the good experienced teachers sit in the teachers lounge because the doe likes to keep the atr pool and not use its most effective teachers...instead, as i roam through the halls there are teachers with no classroom management experience but remember the doe motto...if you can get two for the price of one.....lol....the insanity continues

This stuff is going on in most schools. Social media is a danger to everyone and of course it's best to stay away from parents, staff, and ex students. I got rid of my Facebook account years ago - no teacher in his/her right mind should have one. The city employees people to troll it looking for anything they can find to f--k you.

Isn't time for the Chancellor to face the press on these abuses?

By now the members should know the union's motto:http://sullio.blogspot.com/2015/11/memo-to-new-york-teachers-fck-you-pay-me.html?m=1

Newsflash, NYCDOE wants to hire 100 school health workers including guidance counselors and social workers but my question is this. In the ATR pool the NYCDOE has hundreds of guidance counselors and social workers on rotation meaning they are moved from school to school and each school does not utilize these school health workers because they know they are only at their school for a few weeks. So now the NYCDOE wants to spend millions hiring new ones?? Someone please tell me how to stay sane with the NYCDOE and their reckless management of people and students!! Please!

Chaz, what ever happened to that piece of garbage aka (Horowitz)?

I heard that she resigned (possibly under pressure) in recent weeks. Hopefully that is the case as the world of education is so much better without her. She is nothing more than a cancer to the already sinking ship of our educational system.

Hi MORM,
What is the MORM philosophy or MORM group?
As an ATR I think I've got the approach you're talking about-- say yes to the admins, ignore the scandalous laxity over kids' behavior, ignore the practices that lead to very low college ready numbers, and you get no heat from the admins or visits from the field supervisor. And every ends happy and stress free.
But in the long run, exactly how do the students benefit? Whatever. The media ignore this just as much as they did under Bloomberg. I'll survive, but I don't know about making it to 62.