Why The NYU Study On The Closed Schools, When Replaced By Small Schools, Is Fatally Flawed. 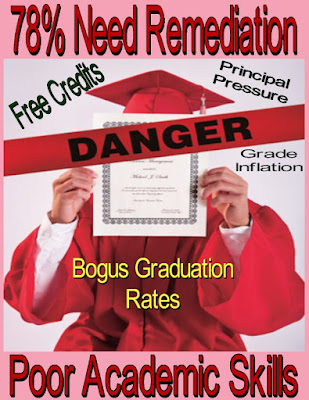 This week, NYU released a study showing that students fared better with the closing of the many large comprehensive high schools and replaced by the Bloomberg small schools. The basis for the study's conclusion was the increased graduation rate from the small schools when compared to the closed schools.  However, the study is fatally flawed since the graduation rate is a bogus parameter and easily manipulated by the school Principal to allow students to graduate academically unprepared for college and career.  Let's look at how schools manipulate the graduation rate.

First, a little history.  During the 2002-08 time period the study looked at 29 closed high schools and the results for future students who instead went to the Bloomberg small schools which showed a 15% increase in the graduation rate.  However, the study admits that students who fled these closing schools did worse then the ones who stayed and graduated,  Moreover, these students who fled were academically behind their peers in the new schools they transferred to.

Credit Recovery:
During the time period the study covered there was an explosion of credit recovery courses that artificially increased a struggling student's credit accumulation.  Even the State finally saw the abuse of the credit recovery system and required the City to put an end to it in 2012.  The primary beneficiaries were the Bloomberg small schools who needed to have a high graduation rate to show how successful they were.  Therefore, they gave struggling students loads of "credit recovery" courses, many of them were bogus.  You can read some of the stories, Here, Here, and Here.

Principal Pressure:
The Bloomberg small schools were notorious in hiring "newbie teachers"  and since these teachers lacked tenure, they were pressured to pass along the school's struggling students.  Teachers who failed too many of their students were discontinued due to scholarship issues and were banned from working at the DOE.  This message resonated loud and clear with the inexperienced staff and resulted in high graduation rates despite these students academically unable to succeed in college or careers.

Student Selection:
To ensure the Bloomberg small schools would succeed they opened with some very significant advantages like excluding many ELL;s and Special Education students the first few years of their operation.  Further, they limited "high needs" students (namely level 1's) and were given 110% of the resources allocated to the school of similar size and student demographics.   These significant advantages were, in contrast to the higher levels of "high needs" , ELL's, and Special Education students that were in the soon to be closed large comprehensive large schools.  Moreover, these soon to be closed schools were starved for resources and averaged 80% of what similar large comprehensive schools received.  The Bloomberg small school I am in for this year is a prime example as they were once a high achieving school in the mid 2000's, when it first opened.  and now they struggle to get even mediocre, students to go to the school as their funding advantage disappeared and they could no longer exclude students. The resulting influx of "high needs" students has destabilized the school environment.

When you put the three aspects together, the bogus "credit recovery" programs, Principal pressure to  graduate academically unprepared students, and the deliberate advantages that the Bloomberg administration bestowed on his newly created schools, you basically are getting a higher graduation rate at these small schools, when compared to the closed large comprehensive schools.  However, what's more telling is the low college and career readiness scores that show that many of the Bloomberg small school are graduating students who are unprepared for college or careers in the adult world. That's why the NYU report is fatally flawed.
Posted by Chaz at 8:04 PM

Speaking of bogus credits, let's not forget about the night school joke known as YABC.
19-20 year old "children" entering the program with 17 credits (the minimum required) are earning a whopping 12-15 credits per semester. The is truly the biggest scam in the DOE. I should know, I worked for the program several years. Phys Ed, a joke. Kids never enter a gym and simply complete packets. The "children" can earn up to 3 phys ed credits in one term. Electives, also a joke. Kids who have part time jobs simply turn in their pay stubs and are granted a "work experience" elective credit. Regents prep classes are formed in ATS and students are offered "independent study" elective credits. Short on global studies credits? No problem. ATS sheets are formed to offer students Global 1 and 2 for the same class! 2 for one. Can't beat it.

You think these "children" will survive BMCC or Kingsborough? Not a chance.

The "advocate counselors" who are employed by a CBO but work with these DOE students, sadly believe that "the children" can and will succeed in college. The advocate counselors push them to apply to college, apply for financial aid, etc.... What a waste of time. The DOE guidance counselor's simply "go along" with it and pretend to be on board. These kids won't last one month in any community college.

Dear Anon 7:47, please don't shout out the best gravy train going. I make 20K a year thanks to YABC. Thanks buddy.

Years ago, NYSED sent investigators masquerading as teacher candidates to apply for teaching jobs in an effort to explore the hiring practices of DOE. NYSED needs to conduct another investigation, but, this time, to find out what really takes place inside the schools.

DEAR 8:02 AM:
Gravy train is soooo true!! During the 4 years I worked with YABC, I averaged 15k-18K per year. Yep, more per session than a high school varsity coach. Sick per session, right?
Anyway, always nice to see another genius grabbing all the available $$$ YABC doles out.
Sorry about the shout out pal.

Credit recovery and principal pass quotas are not only educational frauds, but actual crimes. Atlanta put their lawbreaking administrators and teachers on trial. So why not NYC? Why does former Dewey High School Principal Kathleen Elvin, fired by Farina for falsifying grades wholesale, get to sail off into shotgun retirement without paying for her criminal acts? My theory: the DOE is so dirty in the cover-up of perennial widespread grade-fixing by any and all means possible that Elvin could claim selective prosecution. What do you think, Chaz? Why can't we follow Atlanta's path? Where is our ethical exemplar Chancellor Farina when we really need her? And where, too, is our President Mulgrew who quietly and cowardly dropped the best idea he ever had--a Truth Commission to expose the fakery behind Bloomberg's school improvement magic?

Credit Recovery one time at my previous school for a student whom the principal wanted to graduate consisted of giving the kid a small work packet. He didn't even do the packet but got credit in the subject for the WHOLE year, and he was chronically absent and never did work when he showed up anyway.

Not to mention the domino effect. When a large school closed, the new schools that replaced it serviced less than half the number of kids. Look at Stevenson in the Bronx. The building had 4500 and the new schools in the same building now have 2000. Where do the other kids go? Easy- the go to the large schools which then decline etc etc. Finally the DOE has to build or buy new space. Everybody makes money.

When a principal uses the implied threat of firing a teacher to 'influence' them to pass everybody, who is to blame? I have seen too many good teachers (untenured) get fired for doing the very 'hold them accountable" policy that our admins pay lip service to, only to stab said 'accountable-holders' guilty and eliminating them.

In the new era of diversity and 'social justice,' equality is an impossible dream, so we all live fictions and pass everyone to give the illusion that all are performing equally. Those who do not follow the program are eliminated. Who can blame the concentration camp guards for 'just following orders,' when we do the same?

To Anonymous 8:58:
You are so right about corrupt and criminal principals and APs who squeeze teachers (tenured and not)to pass failing students. If only Chaz's commentators named names.
Let me get the ball rolling: on April 29, 2002, my former Cobble Hill AP Theresa Capra sent me the following email message: "Well the bottom line is you cannot fail 90% of any class—even if you feel that they deserve it. You must try to bring up their grades…." I must try? How about the students trying?

That was long ago you say, but Capra is currently revenging my subsequent Regents cheating allegations in 2004. Next month I will go on trial for 4th degree criminal harassment in her New Jersey hometown for sending her (and 20 city and state education officials and colleagues at Mercer County Community College where she is now employed) an email last June 3 that concluded "... you are a liar, perjurer, coward, and unindicted criminal." Now I have Capra exactly where I've always wanted her--under oath. What fun.

Dr. Capra is now getting a wowing 4.5 rating from Ratemyprofessor for her scholarship at Mercer Community College. Philip, the Cobble kids were obviously scholars, because Dr. Capra developed a star staff with her 4.5 leadership.
If she's pulling a nice DOE pension after leaving Cobble Hill, she could give a p.d. in career survival.

What an irony! The DOE pushes credit recovery, with its dubious online learning. Well, it turns out that Dr. Capra's ground breaking dissertation findings are that students in online courses don't have as good a learning experience as they would have had, if they had taken courses with real live instructors.
What hypocrisy.

In my previous school, all the grades were rigged. The principal did not allow low Fs. What a joke! It was hard to find any kids on so called grade level.

They can last years. Seventy percent of the students in my community college start off in remedial classes. Some spend years in foundational classes. It was suggested that I could teach Math when I retire despite the lack of a Math background. The qualifying statement was, "You can do third grade Math, right?"

Capra and I have not been in the same room since she was suspended from Cobble Hill in 2004 after I turned over to OSI her self-incriminating email of May 29, 2002 premeditating Regents tampering: “Let’s try to focus on getting these kids a 65.… In a pinch they can get points from writing any old garbage down, you are going to love grading time.” Not as much as she did. For example, she and her cheating ring including her immunized boyfriend now husband passed 97 students between 65-69 but failed only 7 between 60-64 re the 2003 Social Studies Regents. This lopsided distribution was condemned by NYSED as not "likely to be attributable to chance."

And yet, despite our 11-year separation, using her psychic powers I would surmise, Capra concluded her June 5, 2015 criminal complaint with the following swipe: "I am afraid he is unpredictable and very unstable at this point deranged."

To be fair, I must point out that SCI did not substantiate Ms. Capra's involvement in the Cobble Hill Regents cheating scandal. The NY Times article is below:


I trust neither the two investigative agencies SCI or OSI and find both of their investigations tainted by politics and pressure from various offices.