The Winners Of The 2015 Golden Turkey Award. 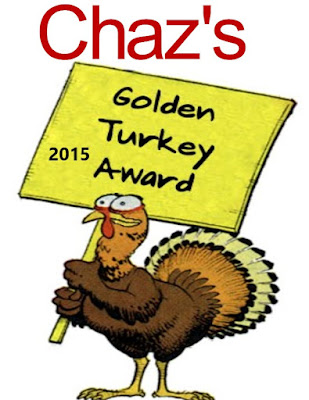 Today is Thanksgiving and its time for my annual turkey award for those leaders who have hurt education and made the classroom environment an unwelcome place to be. This year features a three time winner, an increasingly unpopular Governor, and a Mayor who can't seem to live up to his promises.

UFT President Michael Mulgrew:
Michael Mulgrew has done little to  gain member confidence and his arrogance when it comes to member complaints by trashing their e-mails has made him and his Unity caucus increasingly unaccountable for their actions.  Under Mulgrew the "Unity oath" is more important than member concerns and his support of Common Core and the APPR while refusing to support the growing "opt out" movement is at odds with teachers, the majority of the UFT.  Moreover, his cozy relationship with Carmen Farina and the failure to get the Chancellor to significantly change the DOE's "gotcha system" is proof positive of Mr. Mulgrew's uncaring attitude toward his membership.  Finally, his treatment of the ATRs by not only agreeing to make them second class citizens but has allowed the DOE to unleash the ATR field assassins on the ATRs to get them to resign or retire is unacceptable to many.  When was the last time Michael Mulgrew took the bull by the horns?  Instead he sits back and watches his members get gored.  This makes Michael Mulgrew a three time winner of the golden turkey award. A more complete analysis of Michael Mulgrew can be found in my series Here.

Governor Andrew Cuomo:
The Governor's onslaught on the teaching profession ended with the most punitive teacher evaluation system in the nation which allowed the "junk science" in the form of the "Value Added  Method" to account for 50% of a teachers grade. The result was an increased "opt out" movement and an erosion of the Governor's status in polls.  The fact that these high-stakes Common Core based tests did not count for the students.but only for teachers was a red flag for concerned parents who realized that teachers would forgo total education instruction in favor of the "drill and kill" test preparation for English and Math.  The result was an ever growing "opt out" movement and dissatisfaction with the Governor. Now the Governor is quickly backtracking and may eliminate his teacher evaluation tie-in  using VAM entirely.

Mayor Bill de Blasio:
To say the Mayor has been a disappointment is an understatement.  His failure to reduce class size and overcrowding is a glaring example of his inept administration.  Furthermore, the Mayor has lost the public relations war with the Charter schools and was made impotent by the pro-charter Governor. Under Bill de Blasio's handpicked Chancellor the Bloomberg era policies remain intact and the policymakers that gave us "fair student funding" and the "gotcha" system that's still in force.  Finally, the vastly inferior contract that he and Michael Mulgrew agreed to has allowed the City to have a $6 billion dollar surplus while resources remain scarce and school budgets frozen from the recession years as the Bloomberg education on the cheap policy continues under Bill de Blasio.
Posted by Chaz at 9:47 AM

Justin Stark is a twat

So is Diane L a frosted flake