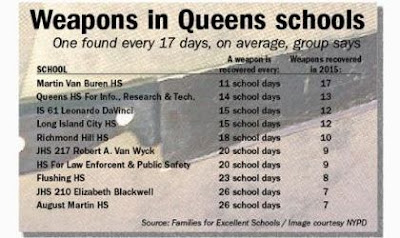 A charter school organization published a report on how dangerous public schools are in New York City since Bill de Blasio became Mayor and changed the student discipline code.  Interestingly, the report left out data from charter schools I wonder why?  While I believe the report is politically motivated and made to show how dangerous our public school are becoming, the data presented is concerning to say the least.  The report was summarized in an article Here

Topping the list of Queens schools was the once great Martin Van Buren High School in Eastern Queens where a weapon was found on a student every 11 days.  You would think that the students would be more wise.  However, Martin Van Buren has become the "dumping ground" for unwanted "over-the-counter" students" with Jamaica and Springfield Gardens High Schools closed and the small Bloomberg schools were able to exclude self contained students and English Language Learners, claiming they do not have the resources or wraparound services to accommodate them.  The result is that the large comprehensive high schools like Martin Van Buren are over-represented by "high needs" students, many with discipline issues.  Joining the list are Long Island City, Richmond Hill, Flushing, and August Martin High Schools.


The Bloomberg schools were not exempt from the list as the second highest weapon possession was Far Rockaway Campus Queens High School for Information, Research, and Technology (QIRT) with a weapon recovered every 14 days. What's more concerning is that some of the middle schools were found to be on the top ten list with the worst being IS 61, the Leonardo DaVinci school in Jamaica at number three with a weapon possession found every 15 days.

Why did the report exclude charter schools?  Well its probably because the rise in weapon possession and drugs would be greater for the charter schools according to Councilman Danny Dromm (D-Jackson Heights), chairman of the Council’s Education Committee, as for the Families for Excellent Schools, he blasted the report  for putting out negative reports about public schools, but failing to show an increase in violence at charter schools.

“They’ve had a much bigger increase,” Dromm said in a Tuesday interview.

While the exclusion of the charter schools from the report is politically motivated, the data presented for the Queens public schools is very disturbing and the weapon issue shows how potentially dangerous some school are and the blame lies squarely on the De Blasio Administrations lax student discipline policy.

Drumm is a former school teacher. He has previously defended public education against the deform movement.

As the warm weather approaches and NYC schools descend further into chaos as evinced by the events of March 29th at three Bronx schools ( One knifing, one bullet brought to school, one brandishing a gun), there's no crystal ball training needed for me to predict here and now that a staff member will be injured/involved in a school violence incident before this school year is out. If our union has half a Cojone, the response would be an immediate strike, which would be justified and upheld in court w/o Taylor Law sanctions since Di Blasio has clearly created and sustained unsafe workplace conditions through his relentless policy of relaxing school safety and security. Incredible that there is no response from Tweed or City Hall on the escalating weapons and serious brawls happening almost daily.

Martin Van Buren is a hellhole. Teacher morale is poor, students are out of control, and the administration is uncaring. I couldn't wait to be rotated away from that snake-pit.

I don't know where this info comes from but QIRT is very safe. Our new principal, Carl Manalo, has created a very warm and inviting culture. Zero teachers left last year and only two will leave this year and that has to do with the commute from the Bronx to south Queens. I think an unsafe school would have a higher teacher turnover rate. Graduation rates will be up this year and Regents results are improving. QIRT is a school on the rise.

It comes from DOE statistics and as for your school? I have two friends who work there and if they could find another school, they would leave in a moment.

As for QIRT being on the rise? It couldn't have gotten any worse. Remember, your school had 105 student vacancies this year and to fill those slots, your school had to take level 1 over the counter students, many with IEP's. Not a recipe for success.
Moreover, your school had a 55% graduation rate and only a 7% college readiness rate.
The third worst in all of Queens.

I hope the light at the end of the tunnel is not an oncoming train.

actually Chaz the school now has a 70% grad rate and things are getting better. Look at our stats again. The stats you have are old. We are proud of our school. Teachers are working real hard in this school. He is the 4th Principal and he is making sure things are good. The school now has over 450 students - what slots that needed freed up? Your stats are after one year with a new admin and new teachers.