The Real Problem In Schools Is The Poor Leadership Exibited By Principals. 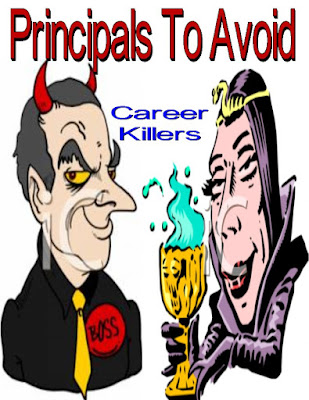 If you read the newspaper editorials or the education reformer organizations, the key to successful student achievement is a quality teacher.  All other factors are ignored being social-economic conditions, family dysfunction, or peer pressure.  Additionally, except for Susan Edelman of the New York Post, the news media focuses on the teachers and nobody else.  Yet, the school tone and success is lead by one person and one person only, the Principal.  Even our disappointing Chancellor, Carmen Farina, stated that 400 principals should not be running their schools, yet few of these 400 principals have been removed and the few that have been removed happened only after intense media pressure.

The majority of these 400 principals who have no business running their schools are easy to identify.  They have the lowest trust rating from their staff, have a majority of untenured teachers due to high teacher turnover, and have poor student graduation to college ready ratios meaning that their students graduate unprepared for the adult world of college and business.

Who are these unqualified principals?  Most of them are Leadership Academy principals who have no tenure and can easily be removed by the Chancellor.  However, since Carmen Farina took over as Chancellor she has been very reluctant to remove principals.  Here is a list of ones she could have removed but didn't until intense media pressure forced her hand.

First, there was Principal Marcella Sills of PS 106 who was allowed to continue as Principal until the media onslaught put an end to her regime.

Then there was Principal Linda Hill who was found guilty of "double dipping" and was allowed to stay in her post until the end of the school year and it was reveled that her OSI report was completed almost two years previously and was not released by the Chancellor.

Who can forget the Chancellor defending Principal Kathleen Elvin of Dewey High School by falsely claiming her graduation scheme was unsubstantiated only to reverse course as the media presented the facts.

Finally, the Chancellor intially failed to remove Annie Schmutz Selfullah after reports of her sexual misconduct at the school surfaced.  When the Chancellor finally took action to stop the media circus and removed the Principal, the DOE tried to quietly slip her back in as a teacher at a renewal school.

How about other Principals that have retained their position under Chancellor Carmen Farina despite media attention.  Let's look as some of them.

Obviously, there are many more Principals that need to be removed but a good start in cleaning house would be the ones I identified above and my list of Queens high school principals that had the lowest staff trust ratings should have been history if you ask me.

Also there are district and network officials who get 0 scrutiny...they oversee building admins

Chaz, do you have any info on how anonymous the school teacher survey is? Our UFT chapter leader hands out the cards to teachers in a random fashion. What I am concerned about is can the DOE/Principals "find out" who is responding on the surveys by individual answers? (If I am the only teacher at my school with more than ten years experience and I write a lot of not satisfied answers will the principal be able to determine if it is me who wrote the not satisfied answers?)

Ann Schmutz was victim of vindictive boyfriend. Mostly vindicated at 3020a, except for using doe computer for personal as well as business, something many of us are guilty of.. If she was a teacher, you'd champion her cause. Theres no evidence she was a tyrant is there? Take her off ur list.

The Principal was found to have a sexy photo on her DOE computer as shown by the NY Post and was found to have committed "theft of service" by DOE investigators. Even if the sexual misconduct was unproven, the other issues would have resulted in a teacher being terminated.

The dude at Clinton had a shower in his office. Crazy stuff. If a teacher raises her voice she's brought up on corporal punishment charges. Kids are going hog wild with their drugs, sex and mobile phones. Consequences = none. It's impossible to teach anymore, I'm getting out at the end of the year. DeBlasio can rotate on his restorative justice schtick. He's an embarrassment to all New Yorkers and Mulgrew is a fucking joke.

Chaz, you wouldn't believe the situation at the New Visions affinity group. They have hired Mr. James Brown as a Deputy Superintendent. This is the type of "leadership" running the city. Brown was a principal who was sexually harassing staff and let go by a Long Island district. The city hired him as a principal but when the details came out, he was removed. Now he was picked up by New Visions. Edelman did a whole piece on him. Below is the piece. This guy is a Deputy Superintendent.
http://nypost.com/2013/09/22/principal-cost-old-district-1m-in-suits-but-city-still-hired-him/

never forget Jose Cruz biggest scum of the earth ever

Maybe you need to contact Susan Edelman at the NY Post. This would make an excellent story next Sunday.

Kwait and his many sex scandals. Gotta love working in the doe!!!!

Judy Henry from Gateway did every piece of dirt in the DOE book. Send 5 great tenure teachers packing. Ranked 3 worse principal in Queens. Still doing demage to the schools and staff. Her and crook supperintendent Mendez cover for each other. She manage to assemble a "hit squad"- piece of shit teachers and new chapter leader who snitch and attack the rest of the staff. Gateway is a real shit show.

Mendez is another crook who covers up for Dwarka.

DWARKA and her AP of Guidance and Science are evil. I've worked with them before.

Neil Ganesh at Richmond Hill and his puppet Christine Peterson are real pieces of crap!!

Judy "future humpback" Henry is a disgrace. She did a number on teachers and staff at Science Skills at well.

The AP in math cannot get more than 10 percent passing the regents, but she can carry out orders to get rid of experienced teachers.

No, Sanders and Clinton said it's systemic racism.

Throw is Iris Blige at fordham hs for the arts in the bronx...this woman principal is famous and was able to stay as principal even after she was found guilty of u rating teachers before she observed them!!!!1 Teachers from all ovoer the city came to fordham to protest with signs - google it to see video and yet she is still there...shame

Namita Dwarka was on a crime watch show that was nationally televised and has still somehow been allowed to keep her job. The DOE is a disgrace and should be shutdown for major FRAUD and cover-up.

Without a doubt, Dwarka is the most evil piece of crap that exists in the DOE today....downright evil. Her APs are scumbags too.

I regularly sit at your bullshit meetings, listening to you and your APs. Do you know the entire staff thinks you and yours are evil?

One of your inner circle

The principals at Campus Magnet need to go...especially Jose Cruz and Lynne Callender.

She has brought the school to the ground, 27 teachers left last year and not even ATRs want to work for her.The Chancellor thinks she is effective.

They are also incompetent and they lie to get rid of good teachers.

The DOE is in a destructive mode, while UFT Unity is protecting the'culture of fraud and corruption.