When Will Chancellor Carmen Farina Say Enough And Remove These Devil Principals? 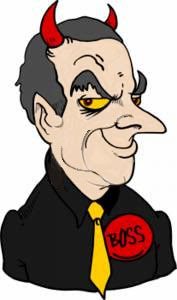 Once again the Principal of John Bowne High School, Howard Kwait, finds himself on the wrong side of an investigation, according to the New York Post.  This time its for grade changing and the Office of Special Investigations (OSI) is currently interviewing school staff to determine how widespread and blatant the grade changing is.  Like I said, Principal Howard Kwait has had some serious problems before such as harassing female Assistant Principals, wrongly had a female student arrested, and had an affair with a female subordinate who paid for his vacation with her that landed him in hot water with the City's Conflict of Interest Board and cost him a $4,500 fine  Finally, the Special Commissioner of Investigations (SCI) found that there were allegations by female employees of his sexually charged vulgar behavior toward them but the DOE, despite their professed zero tolerance policy for sexual misconduct, chose not to pursue the complaints.  You can find all the sordid details Here, Here,  Here and Here.

Obviously, Principal Howard Kwait is not only an embarrassment to the DOE but has cost the City more than $500,000 in settlements and yet Chancellor Carmen Farina has done nothing about it. Moreover, when the grade changing issue first came up, a couple of years ago, the DOE ignored it. Now the New York Post reports that the DOE has finally decided to look into the grade changing allegations and still Howard Kwait is Principal of John Browne High School, go figure.

Whether it was the Bloomberg or De Blasio administration it matters little as the DOE "double standard" continues with principals allowed to retain their position short of murder while school staff are removed from the school and subject to termination charges for minor or even imaginary offenses.  How are our schools going to improve with principals like Howard Kwait still in charge?

Look into all the teachers he has had removed from the school. Good teachers and good people have had careers ruined by this evil man. When will they get restutution? Many have become Atrs and he continues to rule. Fake grades are the tip of the iceberg with this guy.

Grade changing is the only thing that gets media attention. I'm at a school where much of the staff has been run out on a rail for being "incompetent" ( a word used to describe anyone who isn't related to her or doesn't kiss the principal's you know what). People are dropping like flies here with the principal totally supported by a likeminded superintendent and chancellor who replaced 80% of her staff when she took over a school. Every attempt at pushback from the parents students and staff members has been squashed. The UFT is a joke and they have given these demons carte Blanche. They are attempting to remake the profession by killing literally and figuratively all the older members

If you think Kwait is evil, check out his skanky/drunkard, 4'11, lover, Namita Dwarka.

That bitch smells from a mile away.

Chancellor Fariña likes these principals that are dishonest, incompetent and abusive.

The Queens UFT office likes abusive principals like Dwarka that destroys career of teachers with integrity.

Chancellor Fariña likes this principal because he is dishonest.

You forgot to add that he is fat and ugly. Howard Quake, more like.

There's always Part 83 of the Regulations of the Commissioner of Education:

Do people "in the know" ever bother to file Part 83 complaints about these "devil principals"?

Note well: One of the ways that the DOE and NYSED--with the full cooperation of the Attorney General--support and protect criminal grade fixing principals--is the failure to prosecute. Georgia had the nerve to indict the late Atlanta Superintendent Beverly Hall and scores of teachers for the same crimes committed in NYC.

Unfortunately, we teachers are also to blame. If we blew the whistle more often and dispensed with anonymous comments about unnamed schools, we might get the government to act. Remember our own Beverly Hall defended Dewey's corrupt fixer Kathleen Elvin until media exposure did the trick.

The UFT's hands are also dirty: neither Randi nor Mulgrew has ever encouraged reporting Regents scrubbing or credit recover fraud. Mulgrew advocated and then killed his proposal for a TRUTH COMMISSION and never spoke up for the brave rebellious teachers at Dewey.

Dwarka is trash that lost custody of her children. She is useless and couldn't manage a Burger King! She also use to Bonk Mr. Kwait from John Bowne.

Principals have all the power now. They wield Danielson's like an axe against the hapless staff that has no way to fight back. That 'rubric' is so easy to abuse. If you like the teacher you circle more in this column. If you don't like the teacher, you circle more towards that column. The teacher has little recourse to challenge it. Where I'm at, the teaching staff is largely cowed and broken. All the untenured teachers are scared out of their wits, and tenured teachers just keep their mouths shut.

Someone, somewhere, recognize that Dwarka's APs are just as guilty as she.....specifically her APO....he treats us like Stalin!

These people are there to destroy education, and careers of teachers with integrity.

So what if shes short.
What matter is how vindictive she is,

This is my last year at Bryant and maybe the doe

And I'm not leaving because I want to

Check out the term
Gas lighting

Yes we are all anonymous
Because we fear retaliation

If he evil it doesn't matter if he's beutiful

Is teaching the same everywhere
Like AT Bowne and bryant

Ive got to get out.

How are private school
What about community colleges?

I've heard of conversations with some young teachers say that the older teachers that are getting pushed out should be pushed out that they're lazy. This just goes to show some people actually drink the Kool-Aid. And these young teachers will be in line to become ap pretty soon