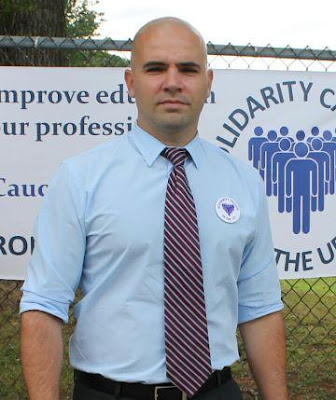 I have finally made my decision between MORE/NAC's Jia Lee and Solidarity's Francesco Portelos and after much deliberation, I have decided that Francesco Portelos would be the better candidate to represent members like me. I carefully decided on Franceso Portelos over Jia Lee for the following reasons:

First, Francesco has been through DOE hell, that is targeted by a vindictive Principal who was eventually forced to retire. and rather than cower and take a deal, went through with his open and public 3020-a hearing.  I went through a similar experience and have the up most respect for people who fight the DOE and win.  Moreover, he best understands what ATRs are going through with field assassins and impossible demands as he is one himself.

Second, Francesco offered the two other candidates an opportunity to debate the issues but was turned down by the arrogant Michael Mulgrew and Jia Lee.  That is a real negative with me when somebody wants my vote and fails to defend their positions on the issues.

Third, unlike the other two candidates, Francesco stands for teacher justice and not muddle the message with the "social justice" baloney.  In fact Jia Lee's caucus calls itself the "social justice caucus".  Just look at the restorative justice fiasco going on in schools that have resulted in 32% fewer suspensions but made far too many schools unsafe.

Fourth, the toolbox is an invaluable creation by Francesco Portelos and is used by many of us.

Finally, Francesco has been able to foil information that the DOE and UFT want to keep secret such as the amount of ATRs, the reemergence of the "rubber rooms", and the creation of the Administrator in need of improvement information on his Solidarity caucus blog.

Do I think Francesco is perfect?  No, he has his faults but don't we all?  In voting for Francesco, I will not be voting for any other Solidarity candidate since I do not know them and don't know what they actually stand for.  Therefore, for the UFT Leadership positions and Executive Board I will be voting for MORE/NAC and hopefully they win the high schools from the UNITY machine.  Once I get my ballot I will post my picks.

Great post! Consider the other Soldarity candidates as they have similar backgrounds to is, are fighters and you may know some of them.

You know, he had 40 people, maybe more, ready to run with him. He got himself on the ballot and let his followers fall on their faces.

Real union leaders who are supportive of democracy don't throw their union brothers and sisters under buses.

They also engage union brothers and sisters in a friendly discussion in a public forum. Seriously, you send your caucus followers to the debate but you don't show up to answer questions?

Not a leader in my book!

I agree. My name is Linda and I am on the ballot. Many of us have stories we would be glad to share with you. The truth is we are putting targets on our backs by running with Francesco in many places but yet we believe it's worth it. If you would like to learn about me get in touch with Francesco and ask him for my info. So much more can be accomplished if solidarity has a presence in each area of the Union. No matter how you vote, I wish you all the best. I read this blog all the time. Best wishes!

Portelos being in the race only gives Unity the advantage.
Bad move.

Agreed, he has been abused and he is a fighter.

Let's replace one ass hole with another. Makes no sense.

Thank you Chaz. Although, I have to say that I agree with Jonathan in that you reconsider...reconsider and vote for ALL SOLIDARITY. They may not have blogs or have been active as long as MORE/NAC candidates, but we've put a strong team together that fights and supports.

They play a very active role in putting a lot of the what you gave me credit for together. I wake up and check my phone to find these Solidarity members discussing member centered actions to the late hours. When someone emails help@uftsolidarity.org, they get a response from many Solidarity members.


Not sure what Jonathan is taking about. We had over 70 candidates, but only had 33 enough signatures.

So funny. Unity wins by landslide and the same ol people on this blog and others can go back and start planning for 2019, when they lose again. I mean it makes for great comedy Chaz. Less than 1 percent of the total UFT force (teachers, secretaries, paras) equaling what, 85,000 members even know there's separate caucuses. I mentioned More and Solidarity to some colleagues yesterday and they had no idea what I was talking about. We all know who is winning the election. More importantly, another year down.