Why You Should Not Be Voting For Michael Mulgrew For UFT President. 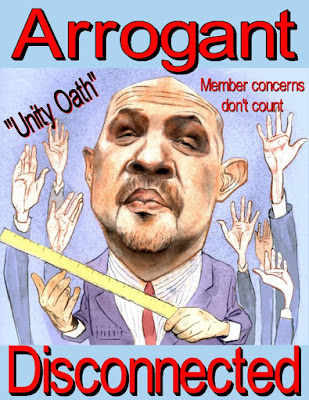 This week election ballots will be sent to all UFT members and retiree, yes retiree, households to vote for the next UFT President and all other elected positions.  While I am not supporting any one caucus, I will be voting for the people who I believe best serve the membership and that includes people from all the caucuses.   However, I most assuredly will not be voting for Michael Mulgrew for UFT President.  Michael Mulgrew has shown to be arrogant and disconnected to the members and has disregarded member complaints while having a love affair with Chancellor Carmen Farina and Bill de Blasio.  Since taking over from Randi Weingarten, Michael Mulgrew has worked against the interests of UFT members.  Let's discuss them at length.

Rather than heeding member wishes and oppose using the State's high-stakes tests that would be part of a teacher evaluation, he actually supported it.  Moreover, he agreed to one without getting a contract from Mayor Bloomberg as required by the State for the implementation of the new system.  In other words, he gave up our rights without any tangible benefit.   Finally, he agreed to the punitive rubric of Charlotte Danielson that required 22 components and claimed victory only to renegotiate with the DOE two years later and drop it to 8 components and claimed victory again when it was a total loss to the members.

Support of the Common Core Standards:

Despite widespread dissatisfaction by parents, students, and teachers with the Common Core standards, Michael Mulgrew is a strong supporter of the Common Core standards.  He even threatened to punch Common Core opponents in the face if they attacked his precious standards which he is not subject to.  What a hypocrite!  Moreover, he criticized the "opt out" movement and supported the State's inappropriate high stakes tests.

Michael Mulgrew showed he was a poor negotiator as he negotiated a vastly inferior contract with the City by using scare tactics he received approval of a 10% raise for seven years and two months or a 1.39% annual raise.  Yes he did get us the two 4% raises we should have received back in 2009 and 2010 but you first must not resign, get terminated, or die before you are made whole in 2020!  In addition, our contract was the only one where there were "givebacks".  The making of ATRs into second class citizens.  The entire Unity legacy on what they did to the ATRs can be found Here.

Who can forget how he agreed to pay and provide bus service for the racial arsonist Al Sharpton led march against fellow union members and how about the quail and booze incident in Albany by his lobbyist who is still there on the members dime!


Members subject to 3020-a termination hearings:

Michael Mulgrew claims there is a new tone at the DOE, I guess he is tone deaf since class sizes are as large as they ever have been.  Further, the obscene paperwork and online grading remains at unacceptably high levels. In addition, Michael Mulgrew refuses to go after vindictive administrators and allows principals like Dwarka to destroy teacher careers.

If you really care about our union and its ability to represent the active members do not reelect the unaccountable Michael Mulgrew to be President of the UFT.  To convince you further you may want to see the video that the Solidarity caucus put together of ex UFT insider James Callahan that is his version of what went on until his dismissal in 2011.  Here.
Posted by Chaz at 10:44 AM

Michael Mildew is an extremely sorry example of why "dynasties" were left behind in Europe. Just because an individual is being groomed as a successor by a present office holder, that certainly does not mean they are qualified for the job. It has always amazed me that teachers have voted in the groomed successor in the UFT rather than using their heads and the most common of common sense. If a shop teacher was having illicit sexual relations with a married woman, would that not be a red flag of his amoral character and poor judgment? Did anyone monitor any of Mildew's other actions (or lack thereof) before putting their X beside his name like a good little Unity lemming? Do retirees immediately lose their sense of solidarity with still-working colleagues and go, like a rising trout, for the money waved in front of them by Unity, heedless of the price paid by still-working colleagues in more onerous hours and conditions?

We are fortunate to have alternative choices this election. We are not married to Mildew (thank G-d; he'd probably be cheating on us). We can bring in some fresh talent, someone dedicated to TEACHERS' welfare, not their own and not their own choice of misguided "social justice". I'm not paying dear dues to foster someone else's idea of a social wrong which they feel they must right. I wanna do that, I'll join the social justice cause directly. No, I'm paying dear dues to have ME represented. That's the idea of a union. You certainly don't see any of the "social justice" clowns rising up to defend US, do you?

Wake up, lemmings. There's a hill right ahead of you. Those of you who want to tumble to your professional deaths, full steam ahead. Vote for FAILURE and DUPLICITY, vote for Mildew. For those of us who wish to get off THAT merry-go-round, who want to feel like valued professionals again (gee, what's THAT?), vote for Solidarity.

At this point voting for a donkey is a better choice than the corrupt Mulgrew.

MULGREW is in bed with the abudive leadership principals and Fariña. And they are all protecting corruption as good teachers get sacrificed.

I recently talked to several teachers about Mulgrew's lack of leadership. You know what they collectively said to me? We "didn't hear any complaints about him when we got this great contract,that's better than all the other unions." It took me a full minute to answer. These are all high school teachers and one of them is a chapter leader. I got into a heated debate with all of them simultaneously. They simply believe everything they are spoon fed by the UFT. They question nothing presented to them by the UFT. However, they wanted proof of everything I said. (Some of them thought ATRs were only teachers who came out of the rubberroom and that there were only a couple of hundred of them - no Jia wasn't one of them.) Mulgrew and the UFT is f--king teachers and they don't even know it. Teachers have to be the most naive group of people around - they can recite the Gettysburg Address or a geometry proof, but don't have basic common sense. It's time to WAKE UP. Put your support behind Solidarity.

Interestingly enough, Mulgrew will coast to victory. I'd say 71% for Unity caucus. There's nothing you or anyone can do about it. Chaz, put me down for 71%. Let's do a Vegas line on the vote. Unity is the heavy favorite.

There are Unity members aware of their caucus' corruption. See comment left at www.Mikemulgrew.com that shows how they steal elections.

Unity members should press the RESET button by voting Solidarity. Unity leadership is the problem.

Unity is the heavy favorite, 4:48 p.m., because my fellow educators are incredibly naive (especially the baby teachers), unwilling to do the intellectual work to research other caucuses, and an incredible amount lack the most minute amount of so-called "common" sense. In them, it ain't so common, apparently. They just vote over and over again for appallingly bad contracts and candidates, just 'cos it's got that big U on it. You would not believe how many "educators" admitted to me that they did not read the last contract, that they were "afraid to anger the Bored of Ed" by refusing it (nice propaganda work, U-nity), that it was the first contract in a long while (So that means you gotta sign it? Even if it's pure garbage?), that it meant a raise (even if the raise was swallowed up by the cost of living) and never thought about the retro pay being denied people who quit, retired or were terminated. They demonstrated about the same level of thinking as typical middle schoolers---none. No wonder people ridicule ed majors as having the lowest IQs on campus or foster slogans like "those who can't, teach". Turn your BRAINS on, people. Results in THIS test very much matter!

He likes the common core, the danielson rubrics, the ATR Pool, and he defends abusive principals like Ms. Dwarka. A complete fiasco.

If Solidarity gets 15%, that would be a major miracle. You really think there are a few thousand people that are going to wade through that ballot to find the solidarity candidates. If they do, that would be amazing. I see 5% for Portelos and a much higher number for Jia Lee running on MORE-New Action.

Mulgrew will try to stop that by any means.

Mulgrew likes the junk science of the rating system, the Danielson Rubrics, the humiliation of hundreds of veteran teachers made ATRs everuthing that is bad with the system.