What's The Difference Between Bloomberg And De Blasio? Not Much When It Comes To The Classroom. 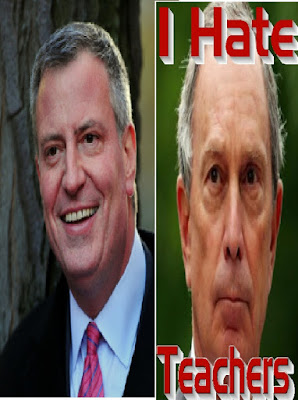 After twelve years of unremitting attacks on teachers and the union under Bloomberg, teachers were hopeful that things would turn for the better with Bill de Blasio.  Sure, he picked Carmen Farina as Chancellor and she had a checkered past when it came to teachers under her supervision. However, our union President Michael Mulgrew claimed there was a new tone at the DOE and everything would come out roses for the teachers in the trenches.  Unfortunately, it turned out to be wishful thinking on the part of out union.

Under Mayor Bill de Blasio, many of the Bloomberg policies remain in effect, be it "fair student funding", large class sizes, the ATR crisis, and the continuation of the punitive Charlotte Danielson framework.  School budgets remained essentially frozen and schools are funded at 86% of what "fair student funding" required.  While this is expected to go up to between 89-92%, its still less than 100%.  Moreover, Mayor de Blasio kept the "fair student funding" based upon a school rather than the District or City average which is what the rest of the country does.  This Bloomberg inspired program that forces schools to hire the cheapest and not the best teachers for their school remains intact under Mayor Bill de Blasio.  Finally, the Chancellor's emphasis in removing "bad teachers" outweighs what's best for the students as more tenured teachers are finding themselves removed from the classroom and given 3020-a termination charges.

Sure, there were some changes in the schools under Bill de Blasio, some good, some bad, but  overall little has changed.  The most negative change under Bill de Blasio was his ill-advised decision to rescind the cellphone ban in schools that has added to more distractions in the classroom.  In addition, he has pressured school leaders to reduce student suspensions that have resulted in increasingly unsafe schools.   Finally, Mayor de Blasio and Chancellor Carmen Farina has pushed for a watering down of the student discipline regulations by imposing a failed "restorative justice"  program and giving out "warning cards" for violent incidents.

Our clueless union leadership may be having a love affair with Mayor Bill de Blasio and Chancellor Carmen Farina but when it comes to the classroom there is little difference between the policies of Michael Bloomberg and Bill de Blasio.
Posted by Chaz at 4:11 PM

It's worse, and not just in the classroom. The union would at least fight Bloomberg, it now takes its direction from DeBlasio and Farina. Many teachers are being terminated or quitting. Mulgrew agreed to DeBlasio and Farina's request to diminish ATR rights, in order to purge the system of them. Let's hope DeBlasio's control of the schools end and that Mulgrew gets a wake up call. Any teacher that votes for Mulgrew is a fool.

They are engaging in systemic age discrimination.

Now there are more hypocritical