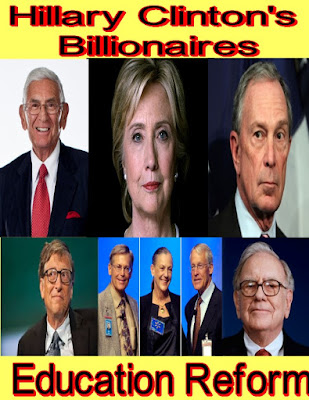 I have been getting some hate mail from my fellow teachers and I suspect from our union leadership on my previous post about who supports Hillary Clinton.  Their main complainant is that the only alternative is Donald Trump and he is pro charter school and school choice (vouchers).  While I agree that Donald Trump's education agenda is terrible for the public schools.  If he were to somehow win the presidency, the Democratic National Committee's (DNC) education agenda (not Hillary Clinton's) would deadlock Congress and the Donald would have no choice but to comprise his education agenda if he is to get things done.

By contrast, if Hillary Clinton wins the presidency, she will disregard the DNC education agenda and support the education reformers that have had Barack Obama's backing.  Besides the $48.5 million dollars she has received from hedge funds she also is supported by the education reform billionaires as well.  Already Eli Broad, Michael Bloomberg, Bill Gates, Warren Buffet, and the Walton clan has donated loads of money to Hillary's campaign.  Moreover, they have strongly and publicly support Hillary Clinton.  Does anybody really believe she would ignore their demands?

Hillary Clinton has said she would continue Barack Obama's policies and if that includes education then it will be a another 4 years of hurting public school education as the Republican agenda would be closer to what education reformers want and I can see Hillary Clinton and the Republicans having common cause when it comes to education policy.  I hope I'm wrong but I doubt it.
Posted by Chaz at 5:13 PM

Look at them f'n ears on the tool to the left.

They're both horrible. A raging asshole or a bought bureaucrat. What a choice!

You do realize a lot of teachers support Trump, but are afraid to say so in our Orwellian PC world of self-appointed gestapo agents, otherwise known as social justice warriors.

A lot of teachers support Trump. Look at it this way: If he wins, education is really not a huge part of his platform. Yes, he said he is for school choice. However, I think he really does not want to get too involved in education due to not really caring and not really knowing about how to implement educational reforms. Hillary on the other hand is already in the pockets of the ed reform movement and will continue the Gates funded BS that we have been dealing with for so long.

Hey Chaz-If Trump happens to win [God Forbid]. There will be a ton of problems in this country . Education will be the least of them.

Teachers For Trump...! Why are so many being silent about it...? We are afraid of being physically attacked by Leftist thugs, Black Lives Matter thugs, and not the least, being labeled as racist, bigoted, and worse. What more of an indictment against the Hillary (For Prison) crowd than that? These are uncivilized Brown Shirts! So, you will have QUITE an unknown bump on Election Eve reflecting this situation.

...and that's NOT including the Bernie Bump,,,,which I feel is an unknown,,,and will determine the race...

Annon 5:00 and 9:14 are right on target: If Trump becomes president, educational reform will be way at the bottom of his "to do" list. Hillary, however will probably have a pow wow with the heads of the ed-deform movement the day after she gets elected. (John King will also probably hold his spot as secretary of education)

Hillary is useless...Trump small chance of improvement ..Hillary no chance...

Chaz..I thought educators were not to be involved in politics around the children..God forbid they might influence some who are of voting age..yet I have seen Hillary supporters embraced at school while anyone who would dare to wear a MAKE AMERICA GREAT hat or tshirt simply trashed in front of children and staff your thoughts?

Whether he knows it or not, the Founders also agree. That's the point of the 10th Amendment.

Hillary? It recently came out that George Soros made a substantial contribution to her Clinton Foundation. That's not a good sign for her education agenda.

By the way, Chaz, I have never, ever, been hugged while wearing my Great hat.