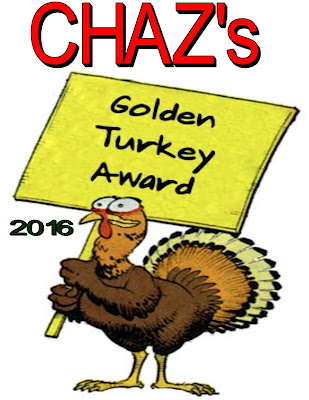 Chancellor Carmen Farina, a two time winner, has persistent in  her disappointing regime.  The Chancellor has continued many of Michael Bloomberg's anti-teacher policies.  Using the Danielson rubric as a weapon against teachers, failing to remove many terrible principals, visiting schools and asking principals to identify their weaker teachers in order to terminate them, and keeping both the "fair student funding" and the ATR crises as part of the Bloomberg/Klein ideology in place.  Chancellor Carmen Farina is still the problem and not the solution when it comes to better public schools.

Mayor Bill de Blasio has continued to fail to live up his to campaign promise to reduce class size as class sizes remain the highest in the State.  Moreover, with a 6 billion dollar surplus, he still allows the DOE to practice an "education on the cheap" policy and blames the State for the lack of resources in the classroom. Finally, the Mayor remains tone deaf to the distracting use of cellphones in the schools that make teacher classroom management difficult and the student learning environment hostile to good academic achievement.

ATR Imitative: The DOE's ATR imitative has been less than successful, with only a bit over 100 ATRs offered permanent positions, many of them were provisionally hired at "bad schools" with high teacher turnover and usually teaching Special Education.   Since there are over 1,300 rotating ATR's and more than 400 ATRs provisionally appointed or filling a maternity leave, the ATR imitative has only resulted in 6% of the ATRs being offered a permanent position.  Moreover, there is a disturbing and persistent rumor that some people at Tweed are discouraging principals from hiring ATRs who survived their 3020-a hearings.  While principals have the sole authority to hire in their schools some weak and scared principals (there are many of them) will follow what DOE Central recommends.  In addition, "Leadership Academy " principals are using this as an excuse not to hire ATRs that won their 3020-a termination hearings. Unfortunately, the UFT leadership has remained silent about either confirming or denying this rumor.

Hillary Clinton who snatched defeat from the jaws of victory with her corrupt and untrustworthy ways, lost the Obama coalition, the rust belt workers, and even 51% of White women.;  Thanks to her baggage and deceit,  we will have to cross our collective fingers and hope that the demigod, Donald Trump, does no real harm.
Posted by Chaz at 4:29 PM

You forgot the biggest turkey of them all - Randi Weingarten. Actually she is an offense to all members of the animal kingdom and the AFT/UFT.

NYC TEACHERS WHO VOTED FOR THE LAST CONTRACT: These turkeys accepted a horrible contract with the the worst pattern raise of any union in NYC history.

And ....... Staying till 4pm on BOTH Monday & Tuesday doing absolutely 0% PD but calling it "PD". TURKEY!!!!! Who the fuck came up with the 2 day a week OD death trap? Who was that Chaz? Painful to sit watching the clock. 4pm on BOTH days, for what? It's helping? We're teaching better? Kids getting smarter? What's the purpose of the TWO DAYS A WEEK, EIGHT DAYS PER MONTH? What?

Maybe it's just me, however, as an elementary school teacher, I prefer the boring ass PD compared to the small group tutor instruction that we did in the past. Too much time with kids who just want to go home.

Neither does the rank and file because they agreed to this in the 2006 contract.

How bout the DOE itself. Here is an organization that prides itself on:
1. Keeping an ATR pool wasting away thousands of talented educators including teachers, social workers, guidance counselors, secretaries and even assistant principals.
2. Spending millions on hiring newbie educators while having thousands of talented people "sit" around in the atr pool and then complaining that the pool is "draining" the system...
3. Refusal to change a funding system that discriminates against senior teachers due to salary constraints however in reality all nycdoe employees get paid from the same source..NYC.
4. Keeping a large majority of the doe staff that was under the bloomberg regime of repression and gotcha mentality while also keeping on hundreds of lawyers
5. ALLOWING principals to run a muck from everything to having their own showers and gymnasiums in their offices to having sex with students parents to targeting innocent hard working teachers and being totally clueless as to the operation of a nyc school
6. Allowing students to bring cell phones to class while also instilling a no suspension policy even if the students curse out a teacher or worse.
Well, I can go on with more bullets and chaz has talked about each of my bullets in exhaustion and the DOE is really about carmen farina but its truly amazing that this organization operates like a lemonade stand.

"Imitative"? or is it "initiative"?

all I want for Christmas is a 20/50 buyout @ 40% - delusional, I know. Maybe MM can persuade the governor after one of their lovefests that it would be very profitable for the State to get rid of tier IV teachers by offering a one-time buyout.