A Tale Of Two Schools And Their Cellphone Use. 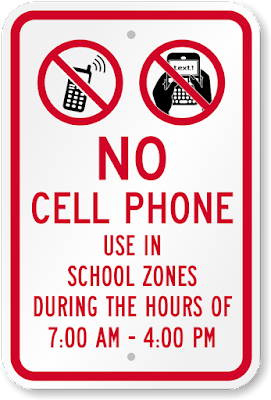 When Mayor Bill de Blasio consolidated his control of the New York City Public Schools he eliminated the cellphone ban and gave principals the option to impose their own rules of cellphone use.  The result was that some students obeyed the rules and others did not.  This post is a tale of two schools.  School A is a high achieving specialized school while school 2 is a high poverty low achieving school.  How has the cellphone policy worked at both schools?

First, the reason Bill de Blasio lifted the cellphone ban was that his son, who went to Brooklyn Tech convinced him that students only would use their phones when absolutely necessary. Of course we teachers know the truth, that cellphones are a distraction and harms academic achievement.  Most Principals tried to set up reasonable cellphone use, limiting them to school cafeterias.   However, this policy quickly changed to prohibiting cellphone use in classrooms and relied on the teachers to enforce the rules as the administration failed or refused to do their job when it came to cellphones.  The result is that in most high schools cellphone usage is a failure, be it in the hallways or the classrooms.

In school A, a specialized high school, students follow the cellphone rules and only use them in the school cafeteria, seldom does one see a student walking in the hallways with a cellphone and rarely does a teacher need to tell students to put their cellphones away in class. Obviously, these high achieving students care about their grades and realize that using a cellphone in class could result in reduced grades and lower academic achievement.

By contrast, school  B, the high poverty and low achieving student body, Renewal Schools are one example, have their cellphones out almost all the time.  Be it in the classroom or the hallways.  Any rules the administration imposed on student cellphone use are ignored once the school let''s the student with the cellphone into the building, and students realize that their is little or no consequences to violating the cellphone rules.  Moreover, with far too many administrations relying on teachers to enforce the rule, the teacher must spend countless minutes of instructional time disciplining students for using their cellphone.  Eventually, the teacher tire of this battle and simply goes on with the lesson while the students continue to look at at their cellphone and are distracted by what they see.  The result is the student fails to take proper notes and learn the subject/

The bottom line the New York City Public Schools should reimpose the banning of cellphones in the schools.  Read my previous posts Here,  Here and Here.
Posted by Chaz at 4:33 PM

I worked in a school that collected cellphones at the beginning of the day and handed them back at the end of the day. Made it easy to get kids to stay for detention and I could actually teach, I am sorta interesting and teach an elective so I could wrangle them in and make learning happen. ...Now I teach in a school where the cellphone use is rampant and students literally get abusive if you demand they put them away. They are filming (snapping) constantly even making calls and face timing. They sit in the main office doing this too!!! Everyone is taking a duck faced selfie of themselves failing high school. All. The. Time. Now, even teaching a fun elective and being a one of the "nice" teachers I have been teaching the same skill for 6 weeks that they should have learned in 3 days. But, look around people with cellphone etiquette are far and few between. Notice when ever a red light turns green you now have to honk at the moron texting in front of you to move? As a society we are voluntarily joining the matrix...good luck humanity....

I work in a school where cell phones are collected in the mornings and given back at the end of the school day.

It is very hard to do this each day but what a difference it makes to the school learning environment!

what amazes me is the fact that "high poverty" students have the money to spend on high tech cell phones. I guess its easy to be poor in nyc schools when everything else is paid for or just given to you. "give a fish" "teach to fish"

No one seems to care. Everyone, most egregiously parents, have given into the demands of our entitled children and students. Cell phones are electronic heroin. The medical industry says it doesn't know the long term effects, but brain cancer is up. The British know and have published warnings. Keep it quiet. In twenty years all of us may have brain tumors and our students will definitely be uneducated, if allowed to use their phones in class. Trump should pick another loser and name him cellphone addiction guru - it's a real epidemic.

If individual schools want they can organize and come up with school wide policies to collect phones.

It is worth the huge effort not to have the cell phone distractions in classes!

@7:30 your getting what you deserve, enjoy the rest of the long year!

8:25,
I try to enjoy everyday. What is it you think I'm getting? We all get what we deserve eventually - some a little sooner than later. The year is flying by - next week is Thanksgiving already. Enjoy your year as well.

to 5:29 - Collecting cellphones is something that most principals would rather not do. Suppose I collect cell phones - do I issue receipts? Then where are the phones kept? Who is responsible for the phones during the school day? What if one gets dropped or stolen? Who returns the phones?

In order to avoid such troubles, my high school is forbidden to bring students to the school with a mobile phone. If a student violates the regulations, he will immediately ask the parents to pick up the mobile phone. This is a good method.