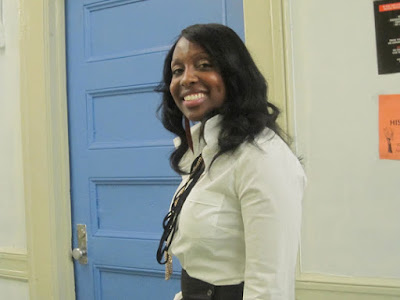 In today's New York Post, Susan Edelman has an article about another ethically challenged Principal, Onethea Swinton,  who is the intern acting Principal of Port Richmond High School in Staten Island.  According to the article, Ms. Swinton is using a Pennsylvania address to register her car, despite actually living in Staten Island.  If that was the only issue with Ms. Swinton I would not be writing this post.  However, Ms. Swinton has quite a bit of controversy surrounding her. In her previous stint at Brooklyn's Secondary School For Journalism, based upon limited data she was rated poorly at a 1.33 with 1 being the worst and 5 being the best.

First, apparently the Pennsylvania address Ms. Swinton uses is for a Tanya John who is an education vender that Ms. Swinton hires to provide student services, for the two schools she has been made Principal of. According to the Post article, Ms. Swinton saves up to $4,000 a year on automobile insurance by using the Pennsylvania address that is listed to Tanya and Kirk John and not her own Staten Island address where her Lexus was spotted by the newspaper.

Second, check the blog "Don't Tread On Educators" and you will find negative comments galore about Ms. Swinton  You can read them here.

Third, as Intern acting Principal she has riled up parents, students and teachers when she eliminated a prized honors program and sowed confusion with the student body due to the schedule and course  changes.

Interestingly, at a Town Hall meeting on October 5th, Chancellor, Carmen Farina, defended Ms. Swinton, what else is new?  According to the Chancellor,  all principals deserve an adjustment period and the parents should give Ms. Swinton more time before complaining.

Finally, according to the teachers at Port Richmond High School, Ms. Swinton tried to impose a new grading policy that would allow most students to graduate unprepared for the adult world and college and it was rescinded only when the staff objected and threatened to expose it to the public.

Just what a struggling school needs an ethically challenged Principal.  Where do they get these people from?
Posted by Chaz at 10:19 AM

Bad principals are disruptive to public schools. They are an important strategy for the privatization of public education, the charter school enterprise.

Chancellor Fariña also thinks Dwarka is a good Principal. The woman just knows how to destroy a school.

Sounds like she is hiring herself as a consultant, under an alias.

I was hired by dr. llisa sulner @ 721x she was the principal. a few years before that she was principal of PS168 where she was arrested and charged with ordering furniture and having it sent to her vacation home she shared with her police officer husband. article is in the nytimes oct.5 1994. so she was a principal at one school got arrested then became a principal at another school. and the best part 4 yrs after she hired me she was promoted to deputy superintendent. there is no real explanation for why this garbage happens it just happens. many times bad people prosper and good people get shit on.

749 comments. Basically this shows she's just wasting the taxpayers' money. I hope this time they finally have enough evidence to terminate her!

Ummm, wow, she dodged insurance money? I see tons of out of state license plates on the cars of teachers at my school. This story is pretty lame. We have way bigger fish to fry than this crap. Sorry to sound lame but it is true.

The issue that isn’t being discussed is the conflict of interest. Why is she using a consultants address in PA, whom she is paying now at her second school? Something stinks here, fear not nothing will happen

All people should follow the law period! This is fraud and also conflict of interest. Would you want to work under someone like this?

Dismantling of Public Education! Another Henchman for the Witch deemed as Chancellor! The Cronyism and Corruption exacerbated by Stupidity.

It is a system that has a corrupt Chancellor.

She drives a Lexus? When I worked in the Bronx most teachers had a city car - an old beater that wouldn't attract attention.

This is off topic a little but I saw a report on TV last week about a stabbing in one of the bastions of academia located in the former Tilden HS building. The report said that there had been a stabbing and principal had been removed. Since hearing that last week I find no mention of it anywhere. Did anybody else hear this or am I imagining things due to my age and will soon end up in the Hadassah Home for Retired Teachers in Miami Beach?

Teaching is no longer a viable career choice because the fascists took that over after they were done with health care. The stupidity abounds with no real leadership. Farina is incompetent like many agency heads in the DeBlasio administration. Teachers are persecuted and led by fear for their jobs as soon as they're 40 years old with 12-15 years in. Millions of dollars are wasted on lawyers, Aussies, consultants, and various practitioners with none of these millions going directly to supporting actual children or aiding classroom instruction. That's besides the entire ATR situation, which you write about so well, having lived it for many years. If they didn't attack senior teachers, millions would have been saved. Fair student funding has created a hostile work environment and certainly can't be good for children, who need adult leadership and compassion, When you're retired several years and the closest you get to your school is seeing former colleagues at the union retiree classes, things become pretty clear. I had a great career and gave it me a life since I came from a very unsupportive/abusive unloving household. I took myself to Queens College and gave myself a career and a very nice life with great retiree benefits that I currently enjoy. The days of counting on wanting to teach and actually being able to teach are over, since I gather the job is almost impossible in some schools due to required insane levels of paperwork. I feel badly for,those who want to teach in NYC. Mayoral control and the various nationalized versions of education with required tests and "teacher evaluation" have ruined public education, especially in NYC.

They still wasting resources to go after experienced teachers. Just a disgrace while these principals are acting badly. Fariña where is the change of tone?

I agree with you Ms. T. Teacher after teacher at the dump I’m in tell me they aspire to become ATRs. How sad is that! For myself I can’t stomach being an ATR any longer. One out of control class after another, a kid told me he was going to ‘bitch slap the shit out of me’. The AP said he was worried about the kid. You’re on your own out there don’t forget it. I’m hanging on to opt out of union dues, my own gift to the UFT.

Another sisda wearing the gold, driving the lexus spending the mula

This is bigotous but WHY DO SO MANY PRINCIPALS HAVE REDICULOUSLY ETHNIC NAMES.???????