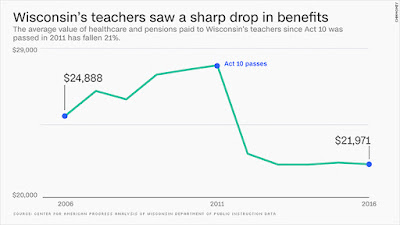 Its been six years since Wisconsin eliminated collective bargaining rights for civil servants, known as Act 10.  This included teachers, and it has resulted in significant changes to teacher recruitment and retention throughout the state.  Here are some of the findings.

Benefits Drop:
Teachers saw a sharp drop in benefits, averaging 21%.  This includes Health Care and Pensions.  The reduction in benefits has also affected school districts to attract the best and brightest to the teaching profession.

Teacher Salaries Less:
Since the passage of Act 10, the average medium teacher salary has been reduced by 2.6%  In rural areas the low teacher salaries has experienced an outflow of new teachers with 25% leaving the district within five years.

Teachers Leaving The Profession:
Before the passage of Act 10, the average rate of teachers leaving the profession was 6.4%.  Since Act 10's passage the average leave rate is 8.8%.  The result is a less experienced teaching staff for many school districts.

Teachers Jumping To Other School Districts:
Before the passage of Act 10, teachers transferring between once school district to another was only 1.3%.  Since Act 10's passage the transfer rate has shot up to 3.4%, a 262% increase!  The result is that poorer and rural school districts quickly lose their best teachers to richer and suburban school districts who can offer more money and better benefits.

Union Representation Decreasing:
In 2011, before the passage of Act 10, the union participation rate was 16.1% in 2016 it has decreased to only 9%   Wisconsin has become a "right to work state" and unions are struggling to stay relevant.

Student Academic Achievement Hurt:
A study has shown that the loss of teacher collective bargaining rights have affected student academic achievement.  Chalkbeat published the report and can be found Here.  The reduction was more significant in low achieving schools in poor urban and rural areas who are having trouble retaining teachers.


In the years since Act 10 passed, Brey said her union has adapted by becoming more active on the local level, and offering more training and other services to make membership more appealing for teachers.

Our Disconnected Union Leadership:
You would think with the almost certain elimination of dues checkoff for unions, starting the next school year, our union would be trying to reach out to the members by being proactive.  Like eliminating Fair Student Funding, The ending of the ATR pool by placing all excessed teachers in vacancies in their district before other teachers can be hired.  Push to remove vindictive principals, and remove Charlotte Danielson as a rubric for teacher evaluation. Instead, our disconnected union leadership ignores the opposition at the Executive Board and the Delegate Assembly and vote, based on the leadership's wishes and not what's best for the members.

I would not be surprised that the union will see a vast reduction in dues collected , maybe over a 50% reduction and all ATRs will no longer pay the dues since they and we feel unrepresented.
Posted by Chaz at 2:45 PM

Fuck Wisconsin, could care less! NYC is untouchable. The money is POURING in from all angles. Principals A.P.'s Network people Etc EtcEtc all making 6 figure salaries upwards of 150/160K. No one is doing anything about it. 7 schools in my campus with about 25 AP's plus the 7 principals. Just this alone is close to 5 mil. Haaaaaaaa!!!!!!!! 120K for me this coming June. Wow. DeBlasio can never ever ever fix what Bloomberg created. The D.O.E. is the perfect place for non intelligent people to make a fortune. Everyone is getting over. Sometimes I think the reformers have a point.

yet the rank and file STILL vote in the same union creatures in. I have said it before STOP writing about it an DO something about it!! until then all the articles in the world only give me something to laugh about!

I know what I’m doing. No more dues to the UFT.

To 8:47 - I also see the breathtaking waste in my building. We have four 'small' schools i.e. 'learning communities' - hah!

There are 4 principals and about 10 APs in the building. Then there are, yes you got it - the ARMY of 'coaches' and 'consultants' and all the rest. Those are retired people who have NO LIFE and come back because they are LONELY, or they are young guns who talked their way into the job (easy gig) and all they do is nitpick us to death. They would do no better than us in the classroom with these difficult students.

Our previous principal was schmoozed by a textbook sales representative into buying 250,000 worth of textbooks over three years. Under our new principal, those books just disappeared! No one knows what happened to them. No one asks.

We are so overworked with paperwork at my school teachers are openly talking of wanting to leave and find another school. Our admins make so much money, but all they seem to do is think up new ways to 'monitor' us and 'assess' our 'instructional practice.'

If paying union dues is optional, since I only have 8 years left, I will probably cancel my dues. Younger teachers in Tier 6 have such a bad deal (though most don't realize it) it would behoove them to also stop paying. Beyond 3 years of RETRO ahead of me, I do not know what else our Union is doing now (other than left wing activism) that is noteworthy.

The problem, Chaz, is that almost everything you mention is in fact a desired outcome of so-called reform; the people in the DOE and elsewhere are doing their best to see it accelerate:

- A drop in benefits? Along with falling wages, it's axiomatic that management as a sub-species reflexively seeks this, with so-called education reform seeking it with a vicious passion.

- Drop in wages? Ditto, and inter-connected with benefits, since lower wages translate into lower pension/401K (they're coming, soon) expenses down the line.

- Teachers leaving the profession? Again, one of the major goals of so-called reform, since a temporary, churned workforce doesn't hang around long enough to collect pensions, where they still exist. School management also seeks it for governance purposes, since a temp workforce is far less likely to become a counterweight to management in developing and implementing policies, unlike unions. Career teachers are stakeholders in the system over time, and management sees that as an "inefficiency."

- Teachers jumping to other districts? Sure, that hurts urban and rural students, but their needs are pretty far down on the food chain, and Disruption is Good.

- Student academic achievement hurt: Collateral damage, since for ever more actors on the stage, the kids are there to be monetized.

You list all these as if the DOE and those setting policy actually consider them bad things, when in fact, they spell $uc$$e$$.

@ all of you fellow teachers. so many administrators because the majority of the students are made up of mindless, uncontrollable balloon heads. they have parents who grew up just like them and they have opportunities to cash in on some unsuspecting teacher who makes the slightest mistake. I know! its sad the climate education is in these days. I hope I live long enough to watch the robots to take over.

@8:47 you nailed it. You wrote it so perfect that I keep reading it because it's happening in my school as well. There are so many administrators and coaches walking around that I actually believe there are more non teachers getting paid than actual teachers. I had a network person ask me how I differentiate in my room and I looked at her like she was crazy. Lucky for me I'm in my 25th year and speak to these useless network slimes like what there true value is, which is garbage. I told her I do not differentiate and that just settling 34 students in my room was a magical task on its own which should be recognized. I then asked this waste if she thought she could teach my classes of 34 to which she replied "probably not." She got the point real quick and walked away because she knew exactly what was coming next. Chaz when are you writing a piece on the waste? The networks and administrators? Today's NY Post with the AP on tape trying to harrass and pick up the student as her boyfriend? Seriously? In the article it states his salary was 147K. Really? Is everyone making around 150K these days Chaz? Over 30 administrators in my building campus as well and multiplied by approx 150K is a grand total of close to 5 million dollars too. Maybe me and 8:47 work at the same school or maybe very high school teacher works in a money sucking campus with over 30 administrators and the grad rates are 60 or 70%. 80% if you're lucky. The network personnel are the best though Chaz. These bottom feeders raking in $$$ for visiting schools and giving PD's on things they can't actually do themselves. A total joke of a system. A total waste of money. Thank GOD I live in a district where none of this exists, night and day. A blessing to visit my kids schools and see what real education and administration look like. They don't know what a network is. They don't know what 7 schools in a campus means. They don't know what it means to travel 1 hour to get to a high school that offers English just like the school across the street from their house. They don't know what Renewal schools are or voting on closing schools or reapplying for your position at a school. Thank the LORD I see the difference and my kids do not have to suffer like those in the boroughs. Nothing will ever be done about it but hey, I have seen it all and I am hoping to get involved with F status pay myself when I retire in a few years. The payroll for useless positions in the DOE is amazing.

Mr. Fiorello, You hit the nail on the head! All by design!

I can't understand these teachers that want to stop paying dues...
No union, no tenure, no health benefits, cuts in salary, and who knows what else.
Maybe 9 hour days? Seriously, take off your blinders and see the bigger picture.

I can. When the union fails to respond to member complaints.