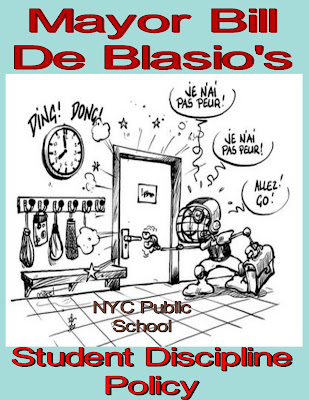 Since Bill de Blasio became Mayor of New York City in 2014. one of his priorities was to reduce the student suspension rate.  He and the Chancellor, Carmen Farina, implemented new student discipline policies that required that principals get DOE Central approval before suspending students.  Another layer of bureaucratic bloat, just what an already bloated organization needs.  As spring break ends, the de Blasio/Farina administration will be further weakling the student discipline code as student insubordination  and elementary school suspensions will virtually be eliminated.

A study done by Chalkbeat found that 22% of all Principal recommended suspensions were rejected by DOE Central under the new student discipline policy last year.  The numbers are probably higher since many principals who may have wanted to suspend students for repeated insubordination and school disruptions didn't bother to fill out the paperwork, knowing that DOE Central would not agree to the suspension.  Instead, many of these students were sent right back to the classroom to interfere with instruction

The Bill de Blasio administration's lax student discipline policy that has reduced  suspensions by 36%  has also seen a corresponding rise in student misbehavior.  The alternatives to suspension has been restorative justice, warning cards, and mediation.  Few teachers have been trained in alternative techniques, since it costs time and money for the training.  The result is that many schools suffer from chaos as misbehaving students are pushed back into the classroom to distract, disrupt, and destroy instruction.

Add the ever weakening student discipline policy with the ill-advised cellphone policy especially in high poverty urban schools,and is it any wonder that schools must resort to academic fraud to jack up their graduation rate while pushing out academically unprepared students into high education or the job market?

I'm glad I am near the end of my career and feel really sorry for the "newbies" entering the system as they will be blamed for the student's lack of academic achievement when its our progressive Mayor and his disappointing Chancellor that is the real blame  for the school's failure to provide a real educational experience.

For the safety of students and staff deBlasio has to be removed from running the schools. How many weapons are coming in daily because of no metal detectors? What happens if God forbid some angry kid decides to use a weapon inside the school? A Columbine or Newtown incident in the heart of NYC? What will be said then? 'A rare aberration that is not indicative of the fabulous behavior of the student body of NYC. We're so sorry and we're working on making sure this never happens again.' Don't let it happen at all, DeBlasio has to go.

Students can bring cellphones into our classes now - but they are not allowed to use them, and if a student uses one or has headphones on with their phone, admins blame us! If we try to get their phone, we risk a confrontation. I've taken student phones and then the student refuses to work for the rest of the class. Again, admins blame us because now the student 'is not engaged.' If we call a non-existent dean, the dean may let the kid keep the phone with a warning and walk away. Rarely do they take phones for more than the duration of the day. Parents mostly don't care if we call about this and the kid gets mad at us and disrupts class the next day to punish us. So the DOE lets the students bring them, but then blames us when they use them and we are put between a rock and a hard place!

Students are not allowed to watch Youtube videos, all the while our admins want us to go paperless with Google Classroom and gives the kids free laptops. But Youtube is not blocked! Who do admins blame! You guessed it! The teacher! We can tell a kid to get off Youtube, but it is optional for them to obey us now and they know it. Even if the kid listens, the moment you turn your back they return to it. Do we take their laptop? Confrontation/refusal to work again! Do we call their parents? Parents don't care? Are they watching porn? Even though we tell them to stop, the admins will blame us! Even though YOUTUBE with all its bad videos is not blocked, as it should be.

Students are not allowed to eat in class at my school, yet as they walk into school every morning, they are given a bag of food and proceed directly to our classrooms! They eat and eat and admins blame us, even though the school gave them the food. Ditto for lunch. As the kids leave, oftentimes the lunch ladies hand them fruits and whatever as they come back to our classrooms. The kids also stuff their bookbags with snacks from the vending machines! It is so bad now, the kids sneak out to the Deli and come back with Mangu to share with all their friends. "Mister, I hungry," they intone a they open a full spread of food on their desks and then ignore you as it is cafeteria part 2 time.

So we have three areas of discipline problems, that the DOE sets us up against, and then blames us when the kids take advantage, all the while the DOE gave the kids the tools to do it!

Having metal detectors is at the discretion of the principal. If a weapon is found at scanning, it's a strike against the school and the principal - so most principals give a big NO! to metal detectors. I was in a small high school. Rough neighborhood, decent over age students, decent staff and exceptional principal. A student was found with a gun by chance and a watchful security agent. Was scanning brought into that school? No, and that's one of the better schools I've worked in. What happens in the future, in the really bad ones that also don't have metal detectors? The principal is making a decision that jeopardizes every single person in that school with no input from those people - the staff, students, custodial, cafeteria, administration and all their respective families. That one person, a principal - that is concerned with their statistics, should be given that right by Mayor DeBlasio is outrageous. I just watched 60 minutes about parents from Newtown going around to schools speaking of warning signs of mass shooters. I've seen those signs in many students and in many schools throughout the borough. DeBlasio has no business running NYC public schools, and every union UFT, CSA, 32B-J, School Safety should come out and say it.


School-related problems need to be immediately brought to the attention of the NYC Council:


Chaz, can you do something about routinely notifying the above three City Council Members regarding the various significant issues which you frequently report?