Why is Chancellor Carranza Flying All Over The Country Rather Than Tackling The Problems At The DOE? 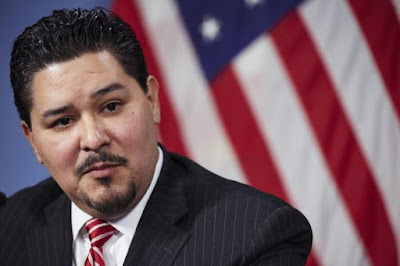 Let's get one thing straight.  I understand that as head of the largest public school system in the country, the Chancellor's presence is much in demand and under normal circumstances, I would not have a problem with the Chancellor traveling to these conferences and discussion groups.   However, since Chancellor Richard Carranza is new to the job, he has much "housecleaning" to do and has not done it.

The first thing he should have done by now is to eliminate the Central Bureaucracy bloat at the DOE. Instead, he actually added to the bloat by installing an additional layer of upper management. Presently, many of the Bloomberg era policymakers are still in their jobs as they continue to implement policies that hurts both students and teachers alike.

He has also failed to resolve the ATR situation and eliminate school-based fair student funding that forces principals to hire "the cheapest and not the best teachers" for their school.

Finally, schools are still suffering from recession era budgets and are underfunded by 10% of their fair funding.

Before our Chancellor should be gallivanting around the country, he first needs to to solve the issues at home.  A more detailed post can be found Here.
Posted by Chaz at 10:06 AM

Carmen is still in charge!!!

this ass clown was second or maybe even fifth choice! he is going to take advantage of every opportunity to network and loaf only he will be very well compensated for it. bend over rank and file and take it because most of you will just cry and do nothing about it. ahhhhh the sweet smell of a buyout, retirement and a job at a great school in dutchess county!

So disappointing to see another out of touch chancellor!!!

Yes he has added another layer of sups and wasting money that should be going to the schools!

How did Deblasio get elected for a second term?

Why should he stick around NYC? It's not like we have a contract set to expire in 5 months or anything.

The biggest bad joke I’ve heard all year! With all the problems in the school system this is what the new chancellor feels is paramount!
https://ny.chalkbeat.org/posts/ny/2018/08/15/carranza-aims-to-speed-up-anti-bias-training-for-educators-calling-it-a-cornerstone-to-school-improvement

I miss you shady.... I thought you would have been all over this post! I know you are on tour with the chancellor's mariachi; I know you are busy but I miss you! Chaz is always so serious and silly, always expecting people to do the right thing... do their assigned jobs. Shady, he just does get it. the chancellor is just a puppet, basically a non show jobs from the commie mayor who made his best propaganda speech yesterday by warning the corporations that the working class is going to raise up! It was so inspiring' I was hoping he was going to say it is spanish, at least a si se puede! but nothing. That Diblasio is something special; I think he really has a shot in 2020. Maybe that is why the chancellor is touring with his band.... so he can be Diblasio's pick for Secretary of Education! Hope to hear from you soon Shady!

Rember Carranza was the emergency liberal pick of this equally liberal mayor. Of which has proved to be a disaster. The question really isn't will DeBlassio and Carranza continue to wreck the DOE; but rather to what extent will the damage extend to in future years.... P,S.: Might be a good time for the "animals" to apply to the Bronx High School of Science. I heard you can get in with a 65 average if your a minority as opposed to a 95 plus average for an Asian or White person.

ALL of us know why he got the job, but few are willing to admit it.

It is especially hard for people of a 'Left-leaning' persuasion to voice it.

He was picked BECAUSE he is Latino (an underrepresented, powerless representative of the minority/majority class in NYC)

Skill, education, experience? None of that matter. If the same man were a white dude he would not have even been considered.

In the school system especially the Left are racial bean counters. Is there enough of 'group X' here and there? Oh, get more of those for over there. And so on.