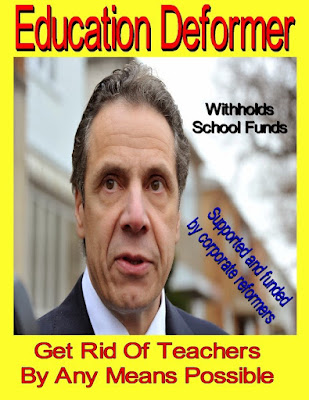 Governor Andrew Cuomo is expected to easily win reelection as Governor in November, as he sweeps through the Democratic primary this week and the general election.  To further his Presidential ambitions, he has swung further to the left (progressive) to get the progressive Democrats to endorse him.  Moreover, he has proclaimed that he is pro union by enacting executive actions that protect unions.  However, has he really changed?

Back in 2011 he imposed a three year wage freeze (the triple zeros) on State workers that affected all public service employee contracts throughout the State since localities can point to the State contract as a bases for giving inadequate or no raises..  If that wasn't bad enough he also imposed unpaid furlough days and a substantial increase in employee paid health benefits.  To put a cherry on top of the "employee givebacks" the Governor required all new employees to join the vastly inferior Tier VI pension plan. Least we forget that he also wanted to reduce retiree health benefits in the 2017 contract.

As for teachers, he pushed for a teacher evaluation system that would have 7% to 8% of all teachers rated "ineffective" due to "junk Science".  Further, 50% of the teacher's evaluation would be based upon student growth scores, even when the student wasn't in the teacher's roster and teachers only account for between 1% and 14% of a student's academic growth!  Finally, he demanded four years of  effective ratings before tenure can be given rather than three and that the burden of proof in a 3020-a hearing be on the "ineffective" teacher rather than the school district which usually means termination.

Least we forget how the Governor has refused to fully fund New York City schools  despite a court order to do so and is a major factor, besides DOE policies,  that schools have budgets that are 10% below their fair funding. In addition, the Governor is a strong supporter of education reform and charter schools.  In addition, he pushed and passed legislation to ensure that charter schools receive public money at the expense of public schools.  No wonder his largest contributor is the education reform organizations and the charter sector.

Remember, the only thing Governor Andrew Cuomo really cares about is winning.
Posted by Chaz at 12:01 AM

Teachers cannot look to anyone in NYC or NYS who will substantially fix problems or create positive changes. The damage of the Bloomberg years, and Race to the Top, which laid the foundation for teacher-bashing, supporting charters, union-bashing, and the cult of high stakes testing, junk science, and Danielson, is not being undone.

I got a "highly effective" rating - it won't matter in any real ways if we think of improvement. I get to keep my job. We aren't seeing a future of raises, or improvement in working conditions. Our union is too much in bed with people like Cuomo.

The 2 Biggest Threats to Teachers:
1. Fair Student Funding - All teachers are likely to become targeted and terminated or ATRs after reaching their 15 year because of high salaries.
2. Andrew Cuomo - He will eventually decimate public schools in NYS for Charters. He will then use it as part of his platform to run for President.

Thank you for saying it like it is. My state union backed him in the primary. I'm furious and will not vote for the leadership again. I can't think of any teachers who will vote for him.

Discrimination is alive in NYC thanks to Mulgrew. Fair sttudend funding and ATR pool.

@3:32 and yet he will still be the governor! shows how much power and influence teachers really have... over anything! Cuomo for president 2020.

I never voted Republican in my life but this time I really think about voting Republican .
I want to send a message to Como That he does need the teachers.
Como may think that the teachers will vote for him because the other guy is worse than he is he is dead wrong .
It will look bad if he loses or wins by a little . And Maybe he won’t run for president.
And we can get a better Democrat. I want my vote to count I don’t want him to take me for granted anymore .

7:56- maybe, Bloomberg released lots of polls that he was way ahead for his 3rd term, but in the end it was a squeaker.

How can anyone vote for this ass????? Going RED all the way! #walkaway

Cuomo is a slimeball piece of shit! Made a deal with Mulgrew to not endorse Nixon!

Hard to say whether I agree with Cuomo being endorsed. He was anti-teacher & pro-charter as long as charters were not in his hometown. However, he did sign a bill to help unions with Janus. Overall, this is why Trump won. Do we really have a choice? It is always between shit vs shittier. We always have to choose shit. Sometimes shittier wins like in the case of Trump. Maybe shitty Clinton would have been better? Maybe not. Clinton would have appointed a Supreme Court judge who would have shot down Janus but is this enough to see Shitty Clinton in office? It was like us having that boy Randi Weingarten leading us. When the boy stood next to Klein & Bloomberg they played him and laughed at him. I still see that little boy around. Still looks the same, always looking confused and angry. Hope Hillary runs again. Will be funny. And now, idiot Biden is talking to about running. Why didn't he challenge Shitty Clinton?

Hey Shady, you’re wrong about the boy wonder, Randi - Bloomberg paid her through the nose for the 2005 contract. She’s smarter than she looks and teachers are way more stupid. She’s still living like a king, just on the 1/2% interest from the massive Bloomberg gift.

@shady maybe you can get duhhshawn to run for office. he sounds like an idiot with an idiot for a father. he has a shitty attitude and a shitty character.

ps you never speak of idiot duhhshawns mama, did she take off instead of you?

@9:27 AM . Boy did I offend you somehow? Was is "the Shitty Clinton" comment or are you just a miserable human being? Are you upset you have to teach DeShawn and he runs circles around you? Were you found ineffective again? Look in the mirror and realize you are ineffective because you suck. Repeat after me "I SUCK". Not my fault you chose a profession that you suck at and if it is Clinton you love so much - remember she didn't do shit for anyone but herself.

You can call me an idiot any time you like but calling my son an idiot is off limits. He is my idiot just like you're my idiot's dumb teacher. I usually have respect for teachers but you are a fuckin idiot. It is people like you who make us look bad.

Don't ask me about DeShawn or his mother. It is not Duhshawn you stupid idiot. It is DeShawn and I hope he urinates in your vodka/coffee cup this year.

@10:52 Listen you need to shut up & teach. You are not here to criticize me or my DeShawn. Did I hurt your feelings somehow? You choose this profession and now want to criticize, bitch and complain because you suck and you are an angry racist. Calling my DeShawn - Dushawn. Who the F do you think you are? If you knew how to teach then you would not be this angry and dumb. Suck it up and teach my DeShawn. Thank you.