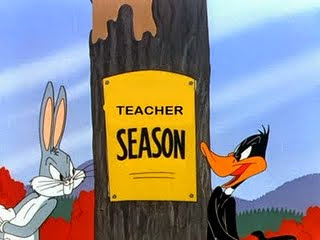 It was understandable during the great recession of 2008-12 that teacher salaries were essentially frozen and  layoffs were in force.  However, as the recession morphed into economic prosperity and low unemployment,teacher salaries failed to recover.  Moreover, class sizes were increased during the recession but politicians failed to allocate funds to reduce class sizes.  Why?  The answer is simple State legislatures used the extra funding that went into State coffers to give residents an across the board tax cuts, rather than fully fund the schools. Unfortunately,  politicians are more interested, like Governor Andrew Cuomo (without the tax cuts like other States), in seeking out "bad teachers" rather than fully fund school districts.

The result of the short sighted actions by the State Legislatures and the Governors are that schools are underfunded, lacked adequate resources, like books and other necessary materials, and oversized classes. No wonder only 5% of college students want to go into education, down from 21% in 2014. An updated map shows which State has anticipated teacher shortages for the 2018-19 school year due to their lack of attractiveness to teach in those States.

The teacher wage gap started in 1994 and has increased ever since. For all public-sector teachers, the relative wage gap (regression-adjusted for education, experience, and other factors known to affect earnings) has grown substantially since the mid-1990s. The teacher wage penalty was 1.8 percent in 1994, grew to 4.3 percent in 1996, and reached a record 18.7 percent in 2017.

Wage penalties have grown significantly for both male and female teachers

Call me an old fart, but at my age, I am quite happy with what the DOE is paying me. I am 2 years away from top salary and I am cool with that. However, I am way more stressed about our working conditions. Drive by Danielson's have caused me serious anxiety and insomnia. Of course teachers should be paid a lot more considering the amount of education that we need. I have a masters plus 30 and am making decent money but nowhere near what my buddies my age are making on just a bachelors degree. Oh yeah, teacher shortages will come and go depending on how well the economy is. I remember when I got hired by the DOE in the mid 90's there was a MASSIVE teacher shortage in NYC. They were recruiting teachers overseas and the subways were filled with recruitment posters. The DOE would take any warm body to put in front of a classroom and guess what? Admins pretty much left everyone alone because they needed those bodies in front of the chalkboard. (Yes, there were actual chalkboards back then) I would never in a million years try to convince a college student to become a teacher today. 25 years ago it was a decent job and now it is just a cesspool of fear and oppression.

Well said. I started 29 yrs ago. We were treated well. Mentoed and taught to revere the veteran teachers.
Thank g-d for 55/25

The demographics of the teaching profession is skewed toward female teachers who are not paid equally and often weak Union leadership makes the situation worse. The lack of union militancy allows the male dominated state legislators have their way with teacher salaries and benefits. It is classic form of sexual discrimination against a female dominated profession.

I always thought going thru a 3020A was bad. I went through two of them .
I realize they don’t fire teachers with developing . So the first time I was looking forward for it.
I was on suspension for one year and got paid then I won. I was going to retire but I said this was to easy.
Paid me for one whole year for not working are they kidding. So I decided to Get out the ATR
pool don’t work too hard and get a developing again. I work two years got developing‘s in another 3020 A
I wanted And got my second 3020A. I was suspended for one year with pay While my case was being heard wow even got paid
I told myself should I do this again but I just retired. The bottom line I got six extra years with little effort.
Remember only 7% of the 2030A last year was fired. The ones that was fired all got 2 ineffectives not Developing .
The moral of the story if you going to Retire you leaving anyway cut down on your work or do nothing after two years you get through 3020A.the third year you go on suspendion with pay and you retire. I got an extra six years that’s 12% added
to my pension. Always think positive even though the board of bed is trying to hurt you .
What is even more funny I got the hugest pass rate on the regents then the new teachers Got your affective ratings anyway ,
so the kids did learn.

I also had a problem with my principal . I was going to retire at the end of the year .He always gave me an ineffective.
I have 96 days in the bank so instead of retiring I use them all up in two years and then retire before the game is at 3020A.
Even they gave me at 3020A and I lost they still cannot touch my pension I would retired anyway. Also got 2% extra on my pension for that extra year. And a lot of fun not giving a shit and vacation time working. Why give them two for one. Even with my labs in working I still did better than the new teachers on the regiments my results was way better.

So true and well said... reminds me of:

There are some nights I hold onto every lesson I ever wrote
Some nights, I say, "Fuck it all!" Stare at the administrator
Waiting for catastrophes, imagining they'd u-rate me
Into changing whatever it is I am changing into
And you have every right to be scared

'Cause there are some nights I hold my lessons close, pushing you to hold me
Or begging you to file letter me, to never let me see the end
Some nights, I live in horror of PD
Danielson and Farina I've never been so bitter
And you, why you wanna stay and watch me?

There are some nights I wait for someone to save us
But I never look inward, try not to look upward
And some nights I pray a sign is gonna come to me
But usually, I'm just trying to get some sleep
Some nights!

Anonymous 5:52, you hit the nail on the head. I’ve been saying this for decades! Teaching is 75% female, so the ”lawmakers” and the unions that clearly do not represent teachers’ best interests set the low wage standards. Don’t forget hostile work environments as well

Still teaching or retired with the 55/25 plan?