Why Do Female Teachers Get Little Or No Prision Time When Caught Having Sex With A Student? 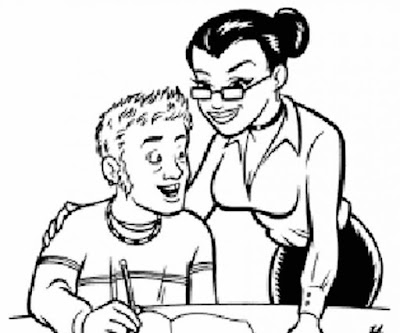 The Daily News reported that Bronx middle school Social Studies teacher Dori Myers pleaded guilty to preforming oral sex on a 14 year old boy and received a 10 year sentence of probation and had to register as a level 1 sex offender but no prison time.  The Daily News article them claimed that she retained her teaching certificate.

The truth is she will most certainly lose her teaching license in New York State when the NYSED files an article 83 against Ms. Myers.  The City cannot take away a teacher's certificate only the State can.  However, what caught my attention was that she received no prison time.

Interestingly, many female teachers like Ms. Myers,  get no prison time, when caught having sexual relations with students while male teachers usually get between 2 to 10 years in prison.  Why is there such a difference?  Apparently, the legal system looks at men as sexual predators who planned and groomed the student, while female teacher are looked at as nurturers who became attached emotionally and crossed the line by becoming sexual.  Hence the disparate sentencing between male and female teachers which is unfair and discriminatory.

Here are the 50 most infamous female cases and the majority never received prison time.  By contrast, this article shows the disparate treatment when sentencing male and female teachers. Moreover, another article shows that same thing.  Finally, read this article.

Our society seems to see female perpetrators as still victims. Take this or any crime, men get far harsher sentences and it gets worse when it's broken down by race. On one sized you have people pushing for "equal rights" between men and women, but through a lot of society, things are very unequal, though it is not the things they are pushing to make equal.

Chaz, thank you for pointing out the gender discrimination in sentencing male and female teachers.

I believe that female-teacher-on-male student sexual activity is far more common than the reverse, but few boys report it, because they like it or are too ashamed to report it.

If it happens to a girl, she reports it and the pitchforks of society come to bear. Women get away with a lot though, and the double standards in all spheres are immense.

Almost every time you do hear about a female teacher doing this, it is almost always because a parent found something on a phone or the gossip vine at school got around too far. Most is kept secret forever or for ages and people do not get as alarmed.

Males are hard wired differently (sorry gender deniers) and a sexual experience for a teen boy rarely bothers the average virile young male past initial puberty, especially if the perp is hot.

With so many young, female teachers barely older than the students, and with no one being taught religious or traditional values anymore, is it any wonder it seems like anything goes?

I personally witness DAILY young female staff members at my school flirting with the male students and vice-versa. Just TODAY, I saw a young Dominican female teacher, who is something of a sexpot, hanging off some boy in the hallway in a half hug, half playful wrestle. The look on her face was priceless and 'joyful.' She does that stuff all the time too, as do a couple of other staff members where I am at now.

When I was in the Bronx a young Indian female teacher was practically begging the boys for a spin, constantly doing very aggressive touch-flirting, hugging, etc.

When I was young, all the female teachers were old and mostly grey haired. Now they are the Thots of young boys' dreams. We should not be outraged too much because it is the way of things now. America of yesteryear has gone away, and the Brave New World is here!

It seems that when a woman does something like this, she is seen as a person with poor judgement who made a mistake while a man is simply a sleaze ball. Take Blanche Dubois from A Streetcar Named Desire for example. In literature she is seen as a tragic figure and we are made to feel sorry for her even though she had an affair with one of her students. If Blanche were a man, the story would be very different.

I became a teacher to help the students . I still believe we can make a difference .
Just because we have a few rotton apples we don’t have to be one of them .
I will still fight for the American dream.I still teach what’s right and teach so
America can live up to and become a true democracy.

Chaz, I loved the picture.

One correction. New York State takes away “certification” not “license”. Part 83 is to revoke the certifications a person may hold. Licensure is purely a city concept.

Regardless of the terminology. Going through a Part 83 is not a good thing.


Thanks for the correction.

Mostly old gray haired old ladies, but quite a few young hot "boner" teachers. When they would talk to you or touch you (in a non-sexual way) it became obvious to everyone by the tail you grew in the front of your pants. Unfortunately, you you had to wait til you got home to shake the tail. Take a good look at those in the top 50. Nearly all are very hot babes.No old hags here.In spite of the fact, most are terrible mugshot photo. Any one of these beauties, me and my pals would be happy to get private tutoring from as opposed to the sexual frustration we all experienced in school. One note about Mary Le Tourneau, most people I know feel real bad about this one. She seems like a truly nice person. She went wackadoo over a Samoan savage, giving up her husband kids and teaching career. She didn't deserve her sentence. None of my pals would have ever let the affair go that far even at Jungle boys' age. Her problem was she was an inexperienced nice girl who did all the right things met the 13 year old creep and fell in love with his Samoan Python, not the little prick that he is. Deal in reality folks!!!