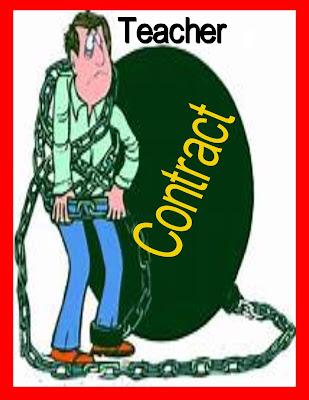 Now that another contract is imminent, the UFT leadership is once again negotiating behind closed doors and we can expect raises that don't even equal the inflation rate and who knows what "givebacks" the union leadership will agree to that hurt members.  We already know there are health care "givebacks".

Because the union leadership keeps everything secret, members cannot object if they have no ides what is being negotiated until it is too late.

Maybe the union leadership will surprise us and negotiate a contract with raises, at least equal to inflation and no "givebacks" but I'm not holding my breath.

Update:  Our union leadership negotiated a 2% annual raise for the members (7.5%/3.75 years).  This is significantly lower than the 2.8% inflation rate and the inflation rate is expected to go higher in the next two years.

What can you expect from crooks.

The 8.25% to 7% pisses me off. The union gave that up for going back to work one day earlier. That 1.25% would add up to tens of thousands over the course of a career

Teaching is a dying career.

In the same way ATMs replace more and more bank tellers, or automated checkouts at the store replace cashiers, this emphasis on technoloy and group work will eventually result for no more need for licensed teachers in the room.

After all, if the mantra is "students teach each other" and the teacher is just a "coach" or "facilitator," then any 20-something warm body will do.

That is still a few years away, but they keep chipping away.

Strike Strike Strike. Only way to change things!! TDA, Observations, time to take some of the power back.

Pretty sure it was 2 days earlier, but your point is still well taken. If you have a half million dollars in fixed, which a lot of us old-timers do, that comes to a little more than $6200 a year and that’s only the first year. The percentage difference is compounded Every year after that

Don't worry for all the trump haters...Mikey Bloomturd is riding to the rescue....see what he does to teachers if he gets elected in 2020.

Does anyone know the dates when Mike and Amy’s ATR Dog and Pony Show will be passing through the third world borough?

Chaz said, "members cannot object if they have no ides what is being negotiated until it is too late."

This is not entirely true. We ALL do have a choice, we can VOTE NO!!!

Unfortunately even with the POS 2005 contract, not enough people vote NO, and we're stuck with whatever pile of crap our wonderful union leadership serves up.

8:15 has the post of the month, maybe even school year.

I do blame our Union leadership for not being on top of this. There's nothing necessarily wrong with Apex or even Home Schooling provided that licensed UFT teachers are the ones generating the lessons, doing the grading, conducting the classes online, etc.

UFT needs to be ahead of the curve instead of behind it. Look at what happened in the music industry because they weren't prepared for digital music distribution. The royalties for streaming music are pennies on the dollar compared to physical media (CD's, LP's, etc.) because the industry didn't negotiate contracts ahead of time with streaming in mind.

UFT should be demanding now that no teachers be excessed or laid off for a remotely taught (online) class, that all courses be taught by NYS licensed teachers, that the pay for doing such courses be the same and # of students capped the same way, etc. We must be on top of this.

Some will say don't allow any tech in the first place, but that is as foolish as a railroad union in the 1st half of the 20th century banning the use of airplanes. If you don't change with the times your job becomes obsolete along with the times.

I think something is happening on the ATR front with the new contract. this line was in the email the chancellor just sent us:

"The agreement also helps us make better use of our most valuable resource – our people – by creating greater flexibility in our ability to leverage the talents and skills of teachers in the absent teacher reserve."

I don't know if this will be good or bad for us in the ATR pool.

Not all ATRs are equal....some are downright shitty as teachers and some just want to sit on their asses and get paid....how does the DOE separate the good from the bad? That is a problem.

All veteran teachers have an opportunity to become ATRs because of Fair Student Funding. This needs to be addressed in the new contract. Will it be? Of course not. It's by design. As for 5:13, there are plenty of downright shitty people in all professions and ATRs happen to be teachers - no different than the typical assholes bitching at the copy machine. It's complete bullshit that veteran licensed teachers are treated like trash. Try being an ATR, covering out of license classes all day with screaming book throwing thugs. Better yet try it in the Bronx - Carranza is trying to offer a cash incentive to get the highly greedy to teach in the third world borough. I'd prefer to teach in Venezuela.

A lot were made ATRs because of age.

I'm not sure why they did the 43 months, instead of just doing the full 48 months at either 9 or 10%. I think membership would have been ok with that. Mulgrew didn't mention about givebacks, let's see what they're taking now

Hey, are you a millennial drinking the doe cool aid? Get a clue!

We should be following the lead of the Las Vegas Culinary Union. They demanded clauses to protect their workers when their jobs are lost to technology. We should be doing the same

In response to 5:13, very easy. The good ones are the ones who want to teach and get back into the classroom and have their own students. The "bad" ones are the ones who like being ATRs. That's how you separate them. It would be good if veteran teachers who wanted to be ATRs could put themselves in the ATR pool. Does the city realize how much money its losing.

Been f&@$?ed over by the doe countless times m

Actually, principals love ATRs. My AP told me today,’you’re doing great for us. We need ATRs. We have bs pds and meetings all the time and need classes covered.’

So, please, get a damn clue. If someone wants to stay an atr and likes it, who are they hurting?

I love your line of doe is wasting money.

Doe wastes money on technology that kids break, on Monday PDs, on consultants, on administration, on kids who don’t care, and on harassing teachers.

At least the money they spend on ATRs goes for good people making a living.

It makes me sick when I read people say who is and is not a good atr.

the give back on the 10 year health benefit needs to be included. see uft link for their positive spin on this takeaway...http://www.uft.org/news-stories/new-agreement-preserves-age-55-retirement-restores-post-labor-day-school-start